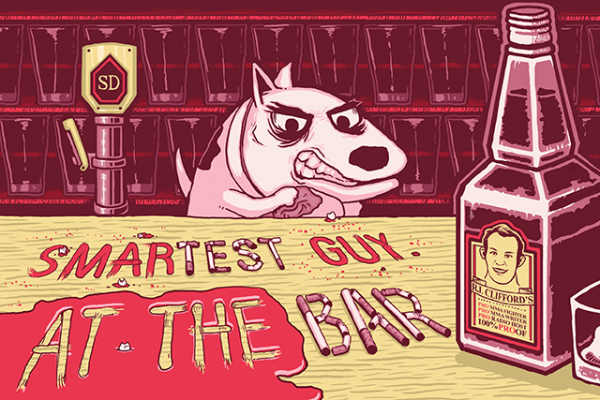 There is something special about an Ultimate Fighting Championship event on a holiday weekend, if only because it allows leeway to cure the dreadful two-day hangover. The Smartest Guy at the Bar -- not to mention his liver -- is thankful for the opportunity to enjoy some fights in Las Vegas while keeping his chances of making it to work on Monday at around 90 percent. The stakes are doubled considering the flyweight title fight at UFC 191 on Saturday goes down the same weekend as college football kicks off. Hopefully Alabama-Wisconsin ends with enough time left to enjoy watching three current or former champions and three “Ultimate Fighter” winners perform. 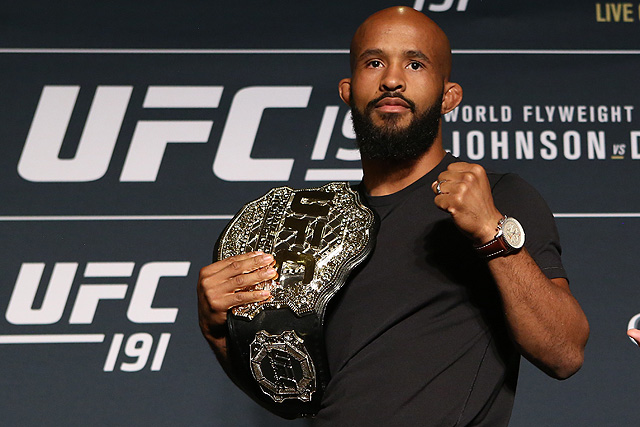 (+ Enlarge) | Photo: Dave Mandel/Sherdog.com
Johnson has won eight straight.
HOW WE GOT HERE: 952 days after the two first tangled in the Octagon, flyweight king Demetrious Johnson defends his strap against top contender John Dodson in a repeat of their UFC on Fox 6 clash from 2013. It was a tough first title defense for “Mighty Mouse,” as he recovered from three knockdowns in the first eight minutes before winning a decision. At the time, no one knew it would stand as his most difficult bout as champion. Johnson has not found a real challenge since, finishing four of the next five challengers, with a lopsided decision against Ali Bagautinov as the outlier ... There is a ton of experience in the co-main event, where former UFC heavyweight champions Andrei Arlovski and Frank Mir face off. They earned their high-profile slot after each scored back-to-back first-round knockouts.


THE PERFECT FIGHT: Johnson-Dodson may not dominate the barbershop conversation, unless that barbershop is full of fighters. The Smartest Guy at the Bar hates the term “real fight fan.” Don’t tell me what to like, and I won’t tell you what to like. However, if your fight conversation revolves around the elements inside the Octagon and not outside of it, this is for you. Let us set the stage: The UFC 191 main event pits one of the sport’s most dominant champions against the one guy who has proven he can beat him. Because Johnson took over late in their first fight, fans tend to forget how close that fight really was early on. Both fighters are in their primes, and they are the two fastest guys in the sport. They have identical height (5-foot-3), reach (66 inches) and leg reach (35 inches). Two legendary coaches corner each fighter. One is a pressuring, well-rounded game plan master, the other a lightning-quick counter striker with power and frustratingly effective takedown defense. Making things even more interesting, Dodson’s girlfriend gave birth to their daughter on Sept. 1. This bout has everything for which a fight fan could possibly hope, except hype. 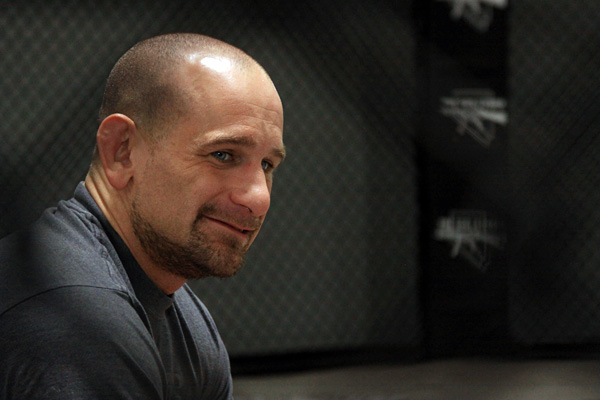 (+ Enlarge) | Photo: Mike Fridley/Sherdog.com
Jackson is a difference-maker.
JACKSON VS. HUME: The biggest stars in college football are coaches. While no one in MMA compares to Nick Saban or Urban Meyer, the two closest examples can be found in opposing corners in the main event: Dodson’s trainer, Greg Jackson -- along with invaluable kickboxing coach Mike Winklejohn -- and Johnson’s mentor Matt Hume. Jackson came into MMA after running a traditional martial arts school and switched to prizefighting when students asked for lessons on cage fighting. Hume started fighting in Pancrase in the early 1990s and opened his AMC Pankration school shortly after. Jackson’s fight philosophy emphasizes mental focus and combat theory. Hume leans on decades of experience and attention to detail. Both coaching staffs have hours of footage to study and experience against each other. I would pay to watch Hume and Jackson play chess. Watching their top pupils Johnson and Dodson compete for the most prestigious title in the 125-pound weight class is even better. 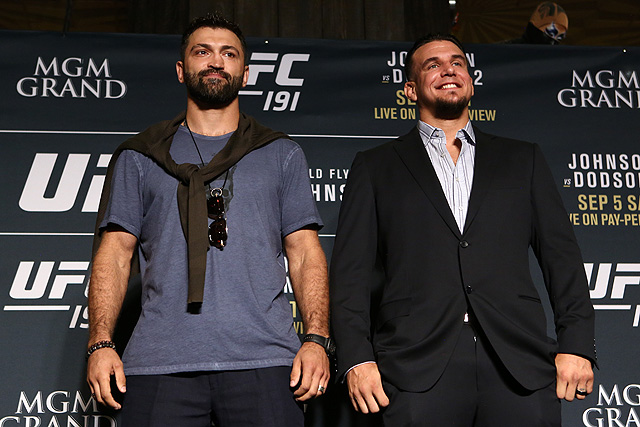 (+ Enlarge) | Photo: D. Mandel/Sherdog.com
Arlovski has turned back time.
FLUX-CAPACITOR SPECIAL: The UFC heavyweight division is old. The average age of the fighters in the top 10 is 35 years old, ranging from 31 to 41. Both co-main event fighters are north of the average at 36. Arlovski made his UFC debut in November 2000, when Paige VanZant was 6 years old. Mir entered the fold less than a year later and is the UFC’s longest active tenured fighter. Both won championship and interim UFC titles over the course of the last 15 years. Still, here we are with the winner well-positioned for a title shot. The former training partners’ matchup puts a spotlight on how bad MMA needs heavyweight prospects. All of a sudden Fedor Emelianenko, who turns 39 at the end of the month, is not such a longshot in the makeshift senior division.

USELESS FACT: The UFC banks on New Year’s, Super Bowl and Memorial Day weekends as destination dates for big pay-per-views. In 2014 and 2015, the UFC brought back the Labor Day weekend title fight. Not since 2008-09 has the organization put on consecutive pay-per-views on Labor Day weekend. The cancelled UFC 151 show sits sandwiched between the two runs, mocking all those who notice it.

SAY WHAT?: Every time Johnson defends his title, he fields countless questions about why he is not a bigger draw. His dominance in the cage is unquestioned, but it has yet to nurture box-office success. Conor McGregor and Ronda Rousey entice the masses with witty quips and verbal rivalries, while the company’s only flyweight champion stays relatively quiet and respectful. Responding to critics is a song and dance he never seems to get used to. He responded to the same old criticism at a media luncheon in Los Angeles on Sept. 1. “It’s not my thing,” Johnson said. “If I was talking trash about something … it’s like, if you beat that person, what does it make you? That doesn’t make sense. For me, it just doesn’t make sense. I’m a grown-ass man. That’s high school s---.” 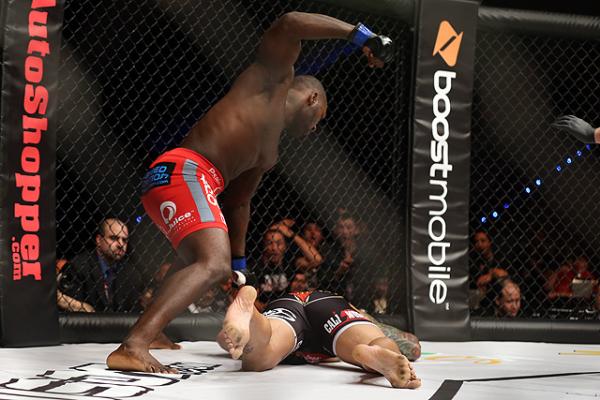 (+ Enlarge) | Photo: D. Mandel/Sherdog.com
Johnson has a knack for the KO.
AWARDS WATCH: The youngest fighter on the card is also its biggest favorite. UFC matchmakers chose to slowly develop VanZant into the potential star many think she can be by pitting her against the 36-year-old, undersized Alex Chambers. VanZant is inexperienced, but she steamrolls the Australian and should score a performance bonus in the process … Anthony Johnson is the most vicious knockout artist at 205 pounds. He has won nine of his last 10, losing only to current champion Daniel Cormier, who was able to toss the Blackzilians rep off his feet and render his dangerous fists useless. Jimi Manuwa could wrestle every day for the next 10 years and not be able to do that to “Rumble.” Johnson’s knockout will be plenty cool enough to earn a bonus … John Lineker and Francisco Rivera are two of the most violent headhunters in the UFC. Their 20 combined KOs illustrate how few other bantamweights are able to deliver such fight-altering strikes on a consistent basis. The Fox Sports 1 prelims audience could easily see both fighters dropped multiple times in their 15-minute concussion contest.