HOLLYWOOD, Fla. -- Chael Sonnen was dumbfounded by what he experienced inside the cage against embattled World Extreme Cagefighting middleweight champion Paulo Filho at WEC 36 on Wednesday at the Seminole Hard Rock Hotel and Casino.

After the Brazilian entered the bout five pounds overweight, he proceeded to execute a woefully passive gameplan against Sonnen (21-9-1). Much to the dismay of those in attendance, it curbed action between the two middleweights and led to restlessness inside and outside the cage.

“It threw me off,” Sonnen said. “Every time I envisioned the match and played it out through my head … the different scenarios … I never once envisioned him not fighting back. I never envisioned him just laying there. I didn’t know what to do. It was similar to being at a dance with a partner who doesn’t know how to dance.”

Filho -- whose personal problems outside the cage seem to have finally spilled into it -- mounted virtually no offense, save for a few submission attempts in the first round. He retreated repeatedly to his back in an effort to bait Sonnen into engaging him on the ground.

Sonnen outstruck Filho (16-1) when the two stood and avoided danger when the action hit the ground, as he earned a unanimous decision and handed his 30-year-old foe the first loss of his career. Still, much of the post-fight talk surrounded Filho’s disinterest and unwillingness to compete. 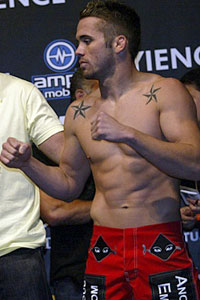 Photo by Sherdog.com
Cerrone's next test will
likely be Jamie Varner.
JSF Stock Soars at WEC 36

In what will go down as the most significant victory of his career, Cerrone (9-0) won a unanimous decision from former lightweight champion "Razor" Rob McCullough at WEC 36. Taken the distance for the first time as a professional, Cerrone showed remarkable recuperative powers against the heavy-handed McCullough (16-5). He was knocked down twice in the opening round, only to spring back to his feet and return the favor.

Cerrone threatened the former titleholder in each round, as he showcased a diverse skill set and proved himself dangerous standing and on the ground.

“That was fun,” Cerrone said.

Greg Jackson -- who trains Cerrone out of the same Albuquerque, N.M., camp that Rashad Evans, Keith Jardine and Nate Marquardt, among others, call home -- liked what he saw from his latest prodigy.

“He needed a war,” Jackson said. “So many questions got answered. I learned so much from it. He took ‘Razor’ Rob’s hardest shots.”

“He’s absolutely ready for Jamie Varner,” Jackson said. “He’s ready to go. Hopefully, we’ll fix all the problems that need fixing and get him stronger and stronger.”

Meanwhile, Garcia (12-3) was even more impressive, as he defeated former UFC lightweight champion Jens Pulver in 1:12 and likely positioned himself for a crack at newly crowned WEC featherweight kingpin Mike Thomas Brown. Only Joe Lauzon finished Pulver (22-10-1) faster, having stopped him on strikes in 48 seconds at UFC 63.

“I want a title shot,” Garcia said. “That fight says it all.”

Since returning to the WEC, Garcia has delivered back-to-back knockouts against Pulver and the highly regarded Hiroyuki Takaya, emerging as a major player at 145 pounds.

“He just hits so hard,” Jackson said. “Every punch is meant to take you out. He’s one of the hardest punchers we’ve got. Of course, we’d love a title fight, but we’ll fight whoever they put in front of us.”

Cerrone and McCullough earned matching $7,500 “Fight of the Night” bonuses after their memorable three-round war. Ripe with action and tension, the lightweight bout had the crowd abuzz throughout the 15 minutes it spent on center stage.

“He definitely brought it,” Cerrone said. “That was the old ‘Razor,’ and that’s what I wanted. I needed to test myself and show I was here to stay. I need a fighter to push me like that.”

What’s next for McCullough -- a loser in two of his last three fights -- remains to be seen. A win over Cerrone would have set the table for a rematch with Varner, the man who dethroned him earlier this year. The 31-year-old kickboxer had strung together nine consecutive wins before he succumbed to Varner’s strikes at WEC 32.

Cerrone and McCullough were not the only fighters to leave the cage a little richer than when they arrived.

Brown earned a $7,500 “Knockout of the Night” bonus after he upset WEC featherweight champion Urijah Faber by first-round TKO in the main event. Three-time Brazilian jiu-jitsu world champion Rani Yahya, meanwhile, banked a $7,500 bonus for “Submission of the Night” after he coaxed a tapout from Yoshiro Maeda with an opening-round guillotine choke in a pivotal bantamweight matchup.

WEC 36 drew a near-sellout crowd of 5,227 to the Seminole Hard Rock Hotel and Casino, netting a $563,578 gate ... Faber went 1,152 days between losses. Before Brown snapped his 13-fight winning streak in shocking fashion, “The California Kid” had not been defeated since Tyson Griffin stopped him on strikes at a Gladiator Challenge show on Sept. 10, 2005 ... Eight of Yahya’s last nine victories have come by choke-related submission. The 23-year-old Brazilian became only the third man to submit Maeda -- he joined Joe Pearson and Masakazu Imanari -- when he cinched a fight-ending guillotine choke 3:30 into their bout ... Four fighters on the WEC 36 card exited the cage with lengthy winning streaks intact: Brown (eight), Jake Rosholt (five), Jose Aldo (four) and Aaron Simpson (four).