Krzysztof Soszynski was supposed to be the next “Ultimate Fighter.”

A Polish-Canadian with an experienced résumé and backing from Team Quest, many fans and pundits alike were shocked by his loss to Vinicius Magalhaes in the semifinals of Spike TV’s joint venture with the UFC, “The Ultimate Fighter 8.”

Again a heavy favorite Saturday night at The Pearl in Las Vegas, Soszynski vowed to get back on track against an outclassed Shane Primm, and that he did.

After a first round that saw the 31-year-old veteran dominate Primm with his hands and ground work, Soszynski made easy work of his challenger in the second period before putting him away with a tight kimura at the 3:27 mark.

Soszynski, 16-8-1, apologized to Primm (1-1) after the bout for cranking the limb so fiercely to solicit a tap, though Primm appeared to be in good spirits and uninjured.

The win was Soszynski’s first official victory within the Octagon.

Quick work was made of Jules Bruchez by TUF standout Eliot Marshall, who scored a slick first-round submission.

Starting strong with a stiff jab that snapped Bruchez’s head backward, Marshall (6-1) followed with a punching flurry that stunned his foe and a quick takedown directly into side control.

Once on the ground, Bruchez (0-1) had little to offer the more experienced Marshall, who wasted little time in finding the back of his opponent and an opening for a fight-ending rear-naked choke at 1:27 of the first.

Kyle Kingsbury had the crowd behind him, but he was unable to neutralize a well-rounded attack from a heavily bearded Tom Lawlor. 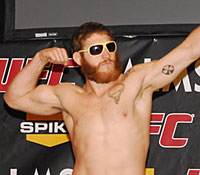 File Photo
Tom Lawlor is off to a
fast start in the UFC.
Lawlor (5-1, 1 NC) cruised by in the first 10 minutes of action with a mix of punching from the standup position and takedowns. Kingsbury was offensive from his back, and his cardio paid dividends in the final stanza, as a fatigued Lawlor struggled to deal with his opponent’s striking and takedown defense in the bout’s last stage.

Lawlor’s early attacks gave him the edge after the final horn, with scores of 29-28 being awarded from all three judges. The loss was Kingsbury’s first as a professional, dropping him to 7-1 with 1 NC.

Nelson took the first two frames on the Sherdog.com scorecard on the strength of several takedowns and advancement to dominant positions. In the third, Roop made it a contest with a takedown of his own and a steady striking game while standing.

Mike Sloan contributed to this report.