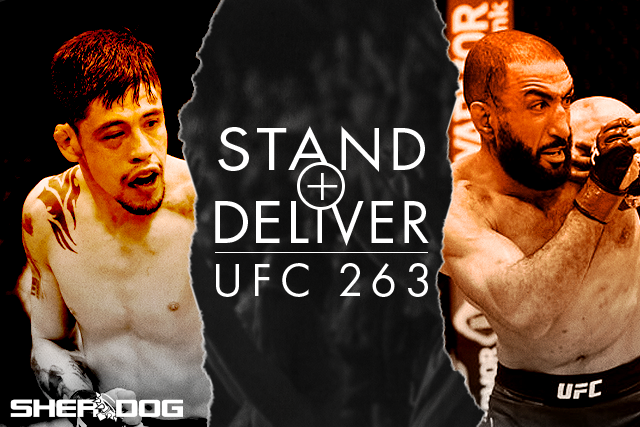 
In some ways, a win is a win and a loss is a loss. But while every fight matters, some feel more important, for any number of reasons. In some cases, the elevated stakes are easy to define. Picture the fighter on a losing streak who knows he or she is likely fighting for their job; or conversely, any matchup on Dana White's Contender Series, where two hopefuls know that the dream is within their reach if they can win impressively. In other cases, a fight feels especially important for reasons that are harder to quantify, but no less real. Whether it’s the pressure of being a pioneer in MMA from one’s country, or the simple added spice of two fighters who really hate each other’s guts, that fight means just a little more.

This Saturday, the Ultimate Fighting Championship pulls into Arizona for its second straight pay-per-view event outside its de facto COVID-era circuit of Las Vegas, Florida and Abu Dhabi. UFC 263 is another example of the lavish hand the UFC has displayed of late in booking its numbered events; the 14-fight card features two title bouts, a blockbuster name in Nate Diaz, and solid matchups all the way down.

A slate of fights as loaded as UFC 263 has high stakes aplenty, but nonetheless there are a few fighters who stand out as facing just a bit more risk or reward than the plain names and numbers would seem to indicate. Here are three fighters under extra pressure to stand and deliver at UFC 263.


That may sound harsh or even far-fetched, considering that the “Assassin Baby” is only 27 years old, still improving as a fighter and gave the UFC flyweight champ the fight of his life six months ago, but bear with me for a moment. The “Fight of the Year” clash between Moreno and Deiveson Figueiredo at UFC 256 last December was booked on three weeks’ turnaround for both men. Even leaving aside the repeat weight cut, which would have affected them more or less equally, and Figueiredo’s claim that he was hospitalized with a stomach infection before the fight, which is difficult to confirm or falsify, short notice introduces chaos into matchups, and chaos favors the underdog. If Moreno loses convincingly to Figueiredo in their rematch this Saturday, the narrative — fairly or unfairly — will be that he was never a match for “full camp Figgy.”

What’s worse is that for purposes of remaining in the flyweight title picture, the majority draw in their first fight is not especially better than a loss for Moreno. If Moreno wins on Saturday, the UFC is likely to book an immediate rematch, while if he loses, he may have to go back and win quite a few more fights before anyone is clamoring for Figureiredo-Moreno 3. In both cases, the outcome is more or less the same as if he’d lost the first fight. In other words, for as long as “Deus da Guerra” is around, this might be Moreno’s last chance to get the belt.

Just…Watch Out for the Triangle, Jamahal Hill


It’s all there for the taking for “Sweet Dreams.” He burst into the UFC last year out of the Contender Series and won his first three fights in convincing fashion — never mind that the devil weed cost him the official “W” for his highlight-reel finish of Klidson Abreu. He wrapped up the year by knocking out former title challenger Ovince St. Preux. Due to a combination of prodigious skill, charisma and a wide-open light heavyweight division, Hill is on the cusp of stardom and contention in a way that very, very few fighters manage to reach before their tenth professional bout. All the 30-year-old Michigander needs to do is get past Paul Craig in their COVID-postponed matchup this weekend and it will be time to start talking about him as a possible Top 10 fighter.

Of course, on the day the term “trap fight” is added to the Oxford English Dictionary, the definition will simply be a picture of Craig’s face — probably painted blue. The entire modus operandi of the “Bearjew” is getting the crap beaten out of him, often as a substantial underdog, before pulling off a fight-ending submission, sometimes at the last possible moment. His triangle choke of Magomed Ankalaev with one second left in their matchup remains one of the biggest upsets in UFC history and the only blemish on Ankalaev’s record. Hill will likely enter the cage as a nearly 3-to-1 favorite on Saturday, and rightly so; Hill is just as big as Craig, twice the athlete, and should have an enormous advantage on the feet against a submission specialist with no easy way to get the fight to the ground. The test, same as for so many Craig victims, will be of IQ. Any lapse in judgment or effort by Hill can provide the opportunistic Scot the opening he needs.


Any UFC 170-pounder outside the top eight or so is pretty much an automatic qualifier for this column. One of the unique charms of the UFC welterweight division — unless you’re in it, presumably — is how incredibly unforgiving it is. Fighters must string together a half-dozen wins just to knock on the door of the Top 15, and a single loss can set them back by a year or more. Compared to fellow fringe contenders like Santiago Ponzinibbio and Geoff Neal, Muhammad is actually in a fortuitous spot. He got to jump the line earlier this year, stepping up on short notice to headline a Fight Night against a Top 5 fighter in Leon Edwards, and while a no-contest via eye poke was nobody’s preferred or projected outcome, it had the effect of letting the momentum of Muhammad’s five-fight win streak continue.

Now the man who wants us to “Remember the Name,” who is 8-1 with one no-contest in his last 10 fights, gets a matchup with easily the biggest name opponent of his career. Even at 43, however, Demian Maia remains a dangerous foe. Yes, Maia is 3-4 in the last four years, but the wins were all against solid fighters and the losses were to, arguably, the four best welterweights in the UFC over that time. And yes, Maia has probably begun to regress to something more like the one-dimensional fighter he was 12 years ago; the surprisingly effective striking of “K-1 Maia” and the bag of tricks he once employed to get better wrestlers to the ground are unlikely to be in evidence on Saturday. Muhammad should win this fight in a rout — just don’t get your back taken standing — but it would be a disaster of major proportions if he were to end up being Maia’s last great win.