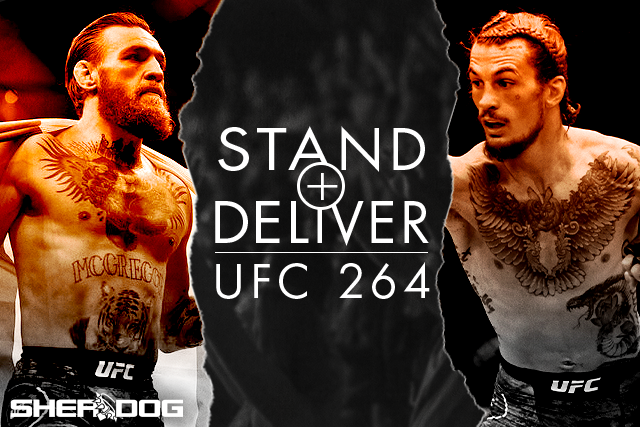 
In some ways, a win is a win and a loss is a loss. But while every fight matters, some feel as if they matter more. In some cases, the reasons are easy to define. Picture the fighter on a losing streak who knows he or she is likely fighting for their job; or conversely, any matchup on Dana White's Contender Series, where two hopefuls know that the brass ring is within their reach if they can win impressively. In other cases, a fight feels especially important for reasons that are harder to quantify, but no less powerful. Whether it’s the pressure of being a pioneer in MMA from one’s country, or the simple added spice of two fighters who really hate each other’s guts, that fight means just a little more.

This week, UFC 264 utterly dominates the MMA landscape in a way that even most other Ultimate Fighting Championship pay-per-view cards do not. With no counter-programming — or piggybacking — from Bellator MMA, One Championship, Professional Fighters League or KSW our attention settles like a laser on Saturday’s Octagon offering and the 26 men and women who will bleed for our entertainment.

While there’s plenty at stake already on a night with two possible title eliminators and probably the largest pay-per-view audience between now and the end of the year, all up and down the card there are fighters who have just a little more incentive to perform than most. Here are three fighters under pressure to stand and deliver at UFC 264.

Either Way, You’ll Still Be Conor McGregor on Sunday Morning


The question will be how he feels about it. At a glance, the UFC 264 main event appears to be an equally high-pressure affair for McGregor and his opponent, Dustin Poirier. After all, it’s a rubber match, with career-defining bragging rights on the line for both men. Whoever wins is a likely title challenger for newly crowned lightweight champ Charles Oliveira. If it’s Poirier, then by being a former interim champ and the obvious top contender; if McGregor wins, the UFC will almost certainly push him to the front of the line due to…well, being McGregor, as well as the fact that former champs tend to have an inside track to future title shots. As of the beginning of fight week, McGregor is only the slightest of underdogs against a man who knocked him out six months ago, and if the line moves in the direction it has for 90% of McGregor’s fights, we might be looking at a pick ‘em by Saturday. So why does this feel like more of a desperate moment for the Irish superstar?

I believe it’s because this feels like more of a last chance for McGregor than for Poirier. If Poirier loses on Saturday, it’s hard not to picture him dusting himself off, going back to the drawing board and beginning to fight his way back. He has 11 UFC appearances since June 2016, a time period during which McGregor has five. Whether “The Diamond” makes it to a title fight or not, he feels like someone who will continue to be a fixture at the top of the division for several years to come. Conversely, if McGregor loses, what comes next? Can you truly see him fighting a Beneil Dariush or Dan Hooker six months from now, or whatever it would take to work his way back up like a “normal” contender? I sure can’t, which leaves the money fights, of which there is really only one left in MMA: Nate Diaz. After that, what?

I tread very cautiously in trying to speculate on the inner thoughts, motivations and emotional state of fighters, especially superstars like McGregor who seem to have the entire fandom and media space arguing over whether they’re “shook” or “motivated.” However, I don’t think it is out of line to say that beyond the money and the fame and the bulls***, the “Notorious” one is still a fiery competitor who cares about his own greatness, by his own internal estimation as well as the external validation of legacy. He’s never shied away from seeking out the toughest possible challenges from himself — the man fought perhaps the greatest boxer and the greatest mixed martial artist of his generation and weight range — and Saturday’s fight is a continuation of that pattern. If all McGregor cared about was cash, he’d be fighting Diaz this weekend. Hell, he probably would have fought him in January instead of Poirier. McGregor is fighting Poirier because he believes he’s better than Poirier and wants to prove it, and probably believes he would beat “do Bronx,” given the chance. If things don’t break his way on Saturday, it will be the probable end of any title aspirations, not to mention a sore spot for the rest of his career and beyond.


“The Suga Show” appeared in this column ahead of his last fight in March, and he stood and delivered proudly, massacring poor Thomas Almeida for two and a half rounds before finishing him off with a blistering right hand in the middle of the third. Yet here he is again, being singled out by your columnist as being under special pressure to perform. That’s what being a 10-to-1 favorite will get you. Even Louis Smolka, O’Malley’s originally scheduled opponent, was about a +300 underdog, but as a tough and well-rounded fighter who had never been knocked out, “Da Last Samurai” felt like an appropriate next step. Then Smolka withdrew from the fight, and in seeking a replacement, the UFC ignored the frantically raised hands of half of its bantamweight division and…signed 9-4 CES MMA mainstay Kris Moutinho, who otherwise might have been on the Dana White's Contender Series radar sometime in the next year.

The choice of opponent isn’t O’Malley’s fault — unless you believe he personally turned down the Brian Kellehers of the world — nor are the long odds. However, they’re now his problem: namely, that when you’re a -1000 favorite, simply winning isn’t good enough. A hard-fought, pedestrian decision win would not feel like much of a step forward for the rainbow-haired Montanan. Fair or not, this is now a showcase fight, so O’Malley had better showcase.


Like a hellish inverse of the Poirier-McGregor fight, at first blush the stakes in Zhumagulov’s probable loser-leaves-town matchup with Jerome Rivera seem more or less equal. Rivera is 0-3 in the UFC, Zhumagulov 0-2. The similarities end there, though. First, there is the cruelty of Father Time; if one man must leave with a pink slip Saturday, it is much less of a guaranteed life sentence for the 26-year-old Rivera than the 32-year-old Zhumagulov, especially at flyweight. There’s also the problem of optics. Rivera has looked largely outmatched in tying a UFC record by losing fights in three different weight classes in his first three Octagon appearances. If he drops a fourth straight to Zhumagulov and is released by the UFC, that feels like no more or less than a non-UFC-ready fighter getting his due, and once again, he has plenty of time to turn things around.

Zhumagulov, on the other hand, came to the UFC out of Fight Nights Global with a strong résumé including wins over quality fighters like Ali Bagautinov and Tyson Nam. He looked like a possible future Top 10 flyweight, but has lost back-to-back fights…which have somehow left him still looking like a possible future top 10 flyweight. He was ultra-competitive against Amir Albazi in January, and before that, he probably should have gotten the nod in his debut against Raulian Paiva. However, 0-2 is 0-2 regardless of optics, and if he loses to a man in Rivera who is clinging to his roster spot by his fingernails, even that will become moot. Zhumagulov will be nearly a 4-to-1 favorite on Saturday. It isn’t the same situation as O’Malley finds himself in — no need for a highlight-reel moment — but he absolutely needs to win this fight, and it shouldn’t look close.