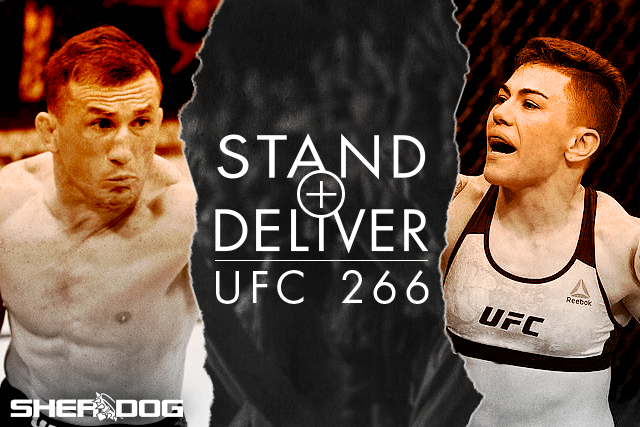 In some ways, a win is a win and a loss is a loss. The difference between one fight and the next lies in what’s at stake. Picture the fighter on a losing streak who knows he or she is likely fighting for their job; or conversely, any title fight in a top regional organization, where the combatants know they are almost certainly being scouted by the big boys. At other times, a fight feels especially important for reasons that are harder to quantify, but no less real. Whether it’s the symbolic heft of being a pioneer in MMA from one’s country, or the simple added spice of two fighters who really hate each other’s guts, that fight means just a little more.

This Saturday in Las Vegas, UFC 266 is set to blow the doors off T-Mobile Arena. The 14-fight lineup is jammed; even leaving aside the title doubleheader and the weird, yet weirdly compelling Nick Diaz-Robbie Lawler rematch, the rest of the main card consists of high-level contender matchups with title implications. The undercard is one of the best in recent memory; aside from a couple of Diaz pupils making conveniently timed debuts, the prelims are stacked with serious prospects, still-relevant veterans and even some contenders. (Dan Hooker on the prelims? Yep.)

On such a solid card, where there aren’t any obvious pink-slip derbies or loser-leaves-town fights, there are still plenty of fighters who stand at a career crossroads; they’re just higher-level crossroads, with different risks and rewards. Outside of the two title fights — anytime a belt is on the line, the high stakes are screamingly obvious — here are two fighters under pressure to stand and deliver at UFC 266.


Dvalishvili owns one of the most appropriate nicknames in the UFC. “The Machine” describes his cold, merciless grind to a tee, and while “The Takedown Machine” might be more technically accurate, the extra word is superfluous. All you need is to look at the 30-year-old Georgian’s ears, frame, or any 90-second span of any of his fights, and it’s abundantly clear what kind of machine we’re discussing.

After a pair of misfires out of the gate to open his UFC career — a close split decision loss to Frankie Saenz and the bizarre after-the-bell technical submission call against Ricky Simon — Dvalishvili has peeled off six victories in a row. All have been completely one-sided decisions, and in fact he has won 18 straight rounds going all the way back to the “was he out?” final frame against Simon. The fights have been rather similar in their optics, as well. Whether the opponent is a striker, submission artist or even a fellow wrestler by preference, Dvalishvili has been able to get the fight to the floor more or less at will, where he punishes them with strikes, forces them to defend themselves constantly and, most demoralizingly, is usually able to drag them right back down if they do manage to get up.

While all six of Dvalishvili’s opponents during this streak have been credible foes, none of them have carried much name value, unless showing John Dodson the Octagon door for the final time qualifies. That is the curse of the grinder; rest assured that if Dvalishvili was on a streak of six highlight-reel knockouts, he would be further up the rankings and front-and-center of the UFC’s marketing efforts. Especially if he had a penchant for outrageous soundbites or some nice rainbow stripes in his hair.

All of that changes this weekend, as Dvalishvili is scheduled to face Marlon Moraes. “Magic” is a true elite bantamweight, a former World Series of Fighting champion who rolled into the UFC with high expectations and came close to fulfilling them. Moraes’ 5-4 Octagon record belies the fact that he has faced an absolutely brutal slate of opposition. It’s been ranked contenders every time out, and aside from the setback in his UFC debut against Raphael Assuncao — which Moraes avenged emphatically — the losses have been to Top 5 fighters on the cusp of a title shot.

Moraes represents by far the most accomplished fighter Dvalishvili has faced, as well as the biggest name. A convincing win should propel “The Machine” into the title picture — or out of the “dominant wrestlers that nobody wants to fight” gulag, at the very least. He’s a -250 favorite as of this writing; here’s hoping he remembers how long it took him to get here and fights accordingly.

Getting to the Top Is Hard, Jessica Andrade. Staying there Is Harder.

While Andrade shares that with Dvalishvili, her recent professional trajectory is closer to that of Moraes. Since leaving the bantamweight division in the wake of a September 2015 loss to Raquel Pennington, “Bate Estaca” has pile-driven her way through an 8-4 run, picking up a strawweight title along the way. All four of her losses in the last six years have come against fellow champions — all-time greats, in most cases. When faced with an opponent below champ level, even solid Top 10 fighters, Andrade’s usual response has been to smash them to pieces. She is the epitome of a fighter who is “right there,” never more than a win away from another title shot.

All it would take to change that is one misstep against a merely good fighter, and that’s what makes Andrade’s matchup with Cynthia Calvillo on the UFC 266 main card so low-key risky. Calvillo, a fellow strawweight transplant, has been tantalizingly close to the top. Her win over Jessica Eye looks great in hindsight, as does her ultra-competitive majority draw against Marina Rodriguez, but in a potential title eliminator against Katlyn Chookagian last fall, she struggled to deal with Chookagian’s far superior height and reach. (Those are problems Andrade will not be presenting, at least.) Calvillo was a late starter in MMA and consequently a latecomer to the Octagon — Andrade has almost twice as many UFC appearances as Calvillo has total fights — which contributes to her feeling like more of an up-and-comer despite being four years older.

That brings us to this Saturday, when Calvillo will enter the cage as a legitimate Top 15 contender who may actually still be improving, a mix of potent, well-rounded skills and occasional lapses. In other words, the kind of fighter Andrade is used to pounding into paste, an expectation that is reflected in the -275 odds. Now she just needs to go out and remind the UFC that if a woman doesn’t have a No. 1 or 2 by her name, don’t even bother sending them her way. Otherwise — if Andrade loses, or even if she struggles mightily in a win — she’s in danger of taking a step back to just-another-contender status.