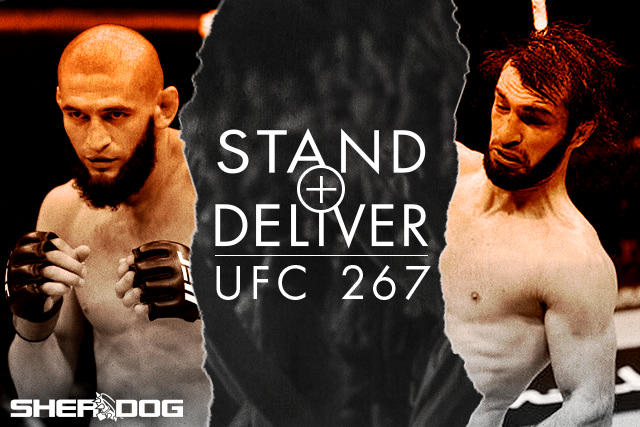 In some ways, a win is a win and a loss is a loss. The difference between any two fights resides in the stakes. Picture the fighter on a losing streak who knows he or she is likely fighting for their job; or conversely, any title fight in a top regional organization, where the participants know they are almost certainly being scouted by MMA’s big leagues. At other times, a fight feels especially important for reasons that are harder to quantify, but no less real. Whether it’s the symbolic burden of being a pioneer in MMA from one’s country, or the simple added spice of two fighters who really hate one another’s guts, that fight means just a little more.

This Saturday, UFC 267 will do everything possible to erase our collective memory of the string of forgettable fight night cards that have preceded it this month. After a couple of ESPN+ shows that arguably featured no Top 10 fighters — in their proper weight classes, at least — UFC 267 rolls into Etihad Arena with an undisputed title fight, an interim title fight, at least three ranked contenders’ matches and a couple of the hottest prospects in the promotion. It is, without exaggeration, a monster lineup of fights.

On a card like UFC 267, many of the matchups are pivotal for their divisions and the sport as a whole, but that doesn’t mean there aren’t additional stakes out there for some of the individual fighters involved. As the UFC settles in for its triumphant return to “Fight Island,” let us focus on a couple of fighters who are under a little extra pressure to stand and deliver.

Howl for Us, Khamzat Chimaev


Just over a year ago, Chimaev was the biggest overnight sensation the UFC had seen in two decades. He had come over from Brave CF in July, then won three fights in two months, all by finish. “Borz” set a modern record with a 10-day turnaround between fights, and while that record has since been broken by Lupita Godinez, his is still the shortest span between two wins. His highlight-reel finishes, combined with a demeanor that can only be described as “affably arrogant,” made him an obvious star on the rise. The UFC tried to shoehorn the 9-0 Chechen into a probable title eliminator with Top 5 welterweight Leon Edwards, and while that failed to materialize, it exemplified the dilemma Chimaev created for matchmakers; i.e., his actual achievements were laughably thin to be talking about him as a title contender, yet the in-cage eyeball test, as demonstrated in his 17-second destruction of Gerald Meerschaert, indicated that it was equally ridiculous to keep throwing unranked fighters at him.

Now, 13 months from the Meerschaert fight, Chimaev will enter the Octagon in the same city where he launched his UFC career with those two quick wins, but the narrative he carries with him will be as different as night is from day. He has been sidelined the entire time by several factors, most notably a case of COVID-19 so serious that he announced his retirement — possibly from a combination of the illness itself and a desire to escape the pressure his promoter was placing on him to return to action before he felt ready.

Standing across from him will be Jingliang Li, a tough, aggressive and deceptively well-rounded welterweight who has lost only to very good fighters in the past few years, as he has hovered around the fringes of the Top 15 himself. Li would have been an outstanding choice for Chimaev’s next opponent a year ago, so he should now serve as an equally good indicator of whether Chimaev has been diminished by his sickness and long layoff. The first test will come before they even enter the cage together, as Chimaev will need to cut all the way down to the lighter of the two divisions in which he prefers to compete. (For a recent example of difficulty cutting weight after a long medical hiatus, see Aspen Ladd.)

Ultimately, this weekend’s fight is a fork in the road for the 27-year-old phenom. If he wins convincingly, it will be as if he never left, and you can expect the drum to begin banging immediately for him to take on a top contender in his next fight. If he loses, or even if he is taken to the limit as the 6-to-1 favorite by Li, there will be dueling choruses of naysayers, with some fretting that he has been permanently compromised by COVID, and others claiming he was only a flash in the pan to begin with.


In other “remember when” news, it has been a rough couple of years for the other Chechen on the UFC 267 bill, Tukhugov. In mid-2016, even after having his nine-fight win streak snapped in a split decision loss to Renato Carneiro, Tukhugov was one of the top up-and-comers in the UFC featherweight division. The 24-year-old had it all: athleticism, well-rounded skills and the Khabib Nurmagomedov connection.

Five years later, Tukhugov is like a walking bingo card of bad MMA news. Since the “Moicano” fight, he has one win, one loss, one draw, one two-year USADA suspension, one egregious weight miss — 150 pounds for a featherweight fight — and one prominent role in the infamous post-UFC 229 brawl, during which he entered the Octagon and sucker-punched Conor McGregor, earning another suspension and fine.

Considering all his baggage, Tukhugov has been given quite a bit of grace by the UFC, and he has been given a winnable bounceback fight this Saturday in Ricardo Ramos, who will probably enter the cage as a nearly 2-to-1 underdog. Even the “Carcacinha” matchup, however, bears the lingering residue of Tukhugov’s blend of bad luck and poor choices. They were originally scheduled to fight in March when an unspecified injury to Tukhugov forced him to withdraw, too late for a replacement opponent to be found. Ramos has already fought since, picking up a nice win over Bill Algeo in May, and will bring that momentum into their rescheduled scrap at UFC 267.

The UFC’s patience with problem-child fighters is in direct proportion to their profitability and competitive standing; just ask Jon Jones, then ask Luis Pena — if you can find him. If Tukhugov makes weight, then looks anything like his old self in getting past Ramos, he’s still just 30 years old and much of the old cachet is there for the retaking. If he loses, and especially if he misses weight again, he has to know that the UFC’s “more trouble than he’s worth” threshold looms large on the horizon.