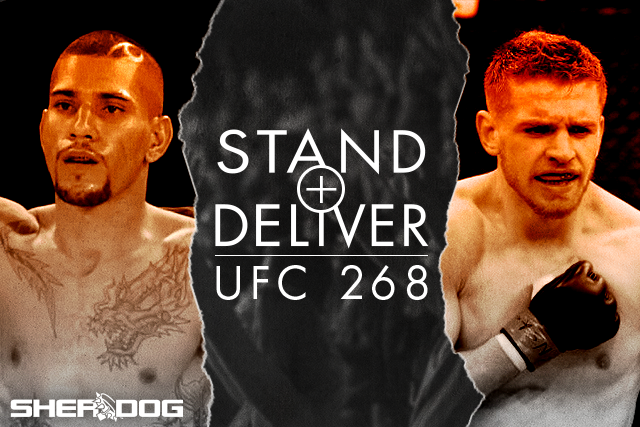 In some ways, a win is a win and a loss is a loss. The difference between fights resides in the stakes. Picture the fighter on a losing streak who knows he or she is likely fighting for their job; or conversely, any title fight in a top regional organization, where the participants know they are almost certainly being scouted by MMA’s big leagues. At other times, a fight feels especially important for reasons that are harder to quantify, but no less real. Whether it’s the symbolic burden of being a pioneer in MMA from one’s country, or the simple added spice of two fighters who really hate one another’s guts, that fight means just a little more.

The Ultimate Fighting Championship pulls into Madison Square Garden in New York City this Saturday for its second numbered event in as many weeks, and this one may be even more loaded than the free offering last weekend in Abu Dhabi. A pair of title rematches top the card as welterweight champ Kamaru Usman seeks to put a definitive stamp on his rivalry with Colby Covington, while in the co-main event, Rose Namajunas will defend her strawweight crown against the woman she defeated earlier this year to win it, Weili Zhang. For those fights, even more than for most championship fights, the high stakes are screamingly obvious: Usman and Covington are a prime example of the aforementioned “fighters who really hate one another’s guts,” and even the matchup between the usually genial Namajunas and Zhang has been leavened by some geopolitical animosity.

However, the remaining dozen bouts at UFC 268 are also rich with must-win fights, career crossroads, long-awaited debuts and every other kind of high-pressure situation imaginable. Here are a pair of fighters who have just a little extra incentive to stand and deliver at UFC 268.


Please note that I am in no way recommending that Pereira use Eminem’s “8 Mile” anthem as his walkout music on Saturday. In fact, I advise him, in the strongest possible terms, against doing so. If you don’t understand why, just see my colleague Jay Pettry’s definitive study of “The Eminem Curse” in mixed martial arts.

Mythical musical maledictions aside, the themes of “Lose Yourself” fit the former Glory Kickboxing champ’s Octagon debut to a tee, as he has essentially one shot here. “Poatan” enters the UFC with the cachet of having knocked out UFC middleweight champ Israel Adesanya in a 2017 kickboxing match. It was no fluke, either; Pereira had already beaten “The Last Stylebender” by decision the year before, and in their rematch he knocked Adesanya stiff with a blistering left hook. That win is essentially a golden ticket for Pereira, a guarantee of an inside track to an MMA rematch with Adesanya the moment the UFC can justify it. It is similar to the dynamic that accompanied the arrival of Joe Duffy to the UFC after tapping out Conor McGregor early in their careers, only more extreme, as Pereira bested Adesanya at his supposed strength.

Pereira’s golden ticket, however, is only redeemable if he can win enough fights that an Adesanya matchup isn’t a complete joke, at least by comparison to some of the other competitive stretches the promotion has made over the years in the name of marketable fights. (Think of Michael Bisping vs. Dan Henderson 2.) The simplest route would be for Pereira to win his first three or so fights in the UFC, starting this weekend with Andreas Michailidis. Michailidis, an aggressive brawler who has been knocked out in all four of his career losses, is made to order for Pereira to notch a highlight-reel moment in his debut. If that happens, expect the UFC to begin immediately hyping up “unfinished business” and a “score to settle” between the newcomer and the champ, and for Adesanya to jump right into the verbal fray. If Pereira loses — or even if he struggles mightily on the ground before pulling off a win — all is not lost, but for a man crossing over to MMA in earnest for the first time at age 34, the window will begin to close quickly.


“The Golden Boy” appeared in this column ahead of his last fight, a matchup with Jack Hermansson at UFC Fight Night 188 in May. After debuting in the UFC with the added interest of being a Ronda Rousey protégé, then rattling off a string of quick finishes, Shahbazyan had just suffered his first career loss against Derek Brunson the previous August. I pointed out that for the UFC to match up the 23-year-old prospect with another Top 10 fighter in Hermansson as a “bounce-back” fight felt a bit like throwing a drowning man an anvil.

Sure enough, Shahbazyan’s second straight matchup with a middleweight contender went little better than the first, and the Hermansson fight was broadly similar to the loss to Brunson. Shahbazyan won the first round with his aggression and frenetic pace, only to hit a wall soon after and get absolutely thrashed. After absorbing another demoralizing mauling, Shahbazyan could head back to the drawing board with what amounted to another copy of the same notes: Cardio issues and an apparent strength deficit against older, bigger fighters would spell his ceiling in the middleweight division until he made adjustments in his training and/or game planning.

At UFC 267, Shahbazyan will look to snap his two-fight skid, and this time the UFC has ratcheted the difficulty level way, way back. Nassourdine Imavov is close to Shahbazyan in age and fight experience, and more importantly he is nowhere close to the middleweight Top 10. The 26-year-old Frenchman represents enough of a step down in competition that as of the middle of fight week, the matchup is basically a pick ‘em. None of this is meant as criticism of Imavov, of Shahbazyan or of the UFC’s matchmakers; in fact, this is a sensible meeting of two promising twenty-somethings who could use a solid win, and each is well-equipped to test the other’s liabilities.

Ultimately, Shahbazyan was a victim of his intangibles — he couldn’t help being one of the youngest fighters in the UFC, nor could he help the associations with Rousey — but even more so, a victim of his own success. Much like Khamzat Chimaev, who burst into the promotion last year by blowing out a couple of borderline UFC talents, but then made himself impossible to ignore by toying with legit names in Gerald Meerschaert and Jingliang Li, Shahbazyan destroyed Brad Tavares two years ago in a way that basically nobody else ever had. The UFC ended up overmatching him with Brunson, repeated the mistake with Hermansson, and finally seems to be making a course adjustment to treat him like any other solid prospect.

Shahbazyan’s roster spot is probably safe even if he loses on Saturday. His youth, the Rousey connection and the tacit acknowledgement that he may simply have been given too much, too soon, make him a likely candidate for a little extra leeway. However, to twist a phrase I seem to use every week in this space, Shahbazyan is not merely in danger of becoming “just another guy” at middleweight. That boat has sailed already; at this point he already is just another guy. If he aspires to be something special again, the onus is on him, and it starts this weekend at UFC 267.