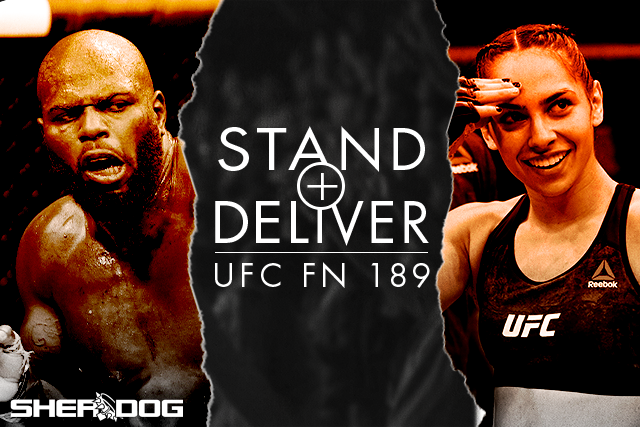 
In some ways, a win is a win and a loss is a loss. But while it is true that every fight matters, some feel more important, for any number of reasons. In some cases, the elevated stakes are easy to define. Picture the fighter on a losing streak who knows he or she is likely fighting for their job; or conversely, any matchup on Dana White's Contender Series, where two hopefuls know that the dream is within their reach if they can win impressively. In other cases, a fight feels especially important for reasons that are harder to quantify, but no less real. Whether it’s the pressure of being a pioneer in MMA from one’s country, or the simple added spice of two fighters who really hate each other’s guts, that fight means just a little more.

After taking Memorial Day weekend off, the Ultimate Fighting Championship returns to action at its base of operations, the UFC Apex in Las Vegas. UFC Fight Night 189 has a bit of “leftovers night” feel to it; there are only a handful of ranked fighters on the card, and only two debuting prospects, Legacy Fighting Alliance call-ups Gregory Rodrigues and Kamuela Kirk.

If “UFC Vegas 28” stands out for anything, it is a preponderance of heavyweight fights; there are three, including the main and co-main events. Even there, however, the theme is of regaining, rather than maintaining momentum, as five of the six big men scheduled to compete on Saturday are coming off a loss, and two are on losing streaks of two or more fights. Despite this — or perhaps because of it — these fights mean plenty to the athletes involved. Here are some fighters under a little extra pressure to stand and deliver at UFC Fight Night 189.


On paper, Jairzinho Rozenstruik is not in a bad place in the heavyweight division. He is 11-2 overall, 5-2 in the UFC, having lost only to current champion Francis Ngannou and likely future title challenger Ciryl Gane, who outpointed him in the main event of UFC Fight Night 186 in February. While he would obviously prefer to get back on the winning track this Saturday against Augusto Sakai, it isn’t the end of the world — or his UFC career, probably — if he doesn’t. However, what doesn’t show on paper is how Rozenstruik looked against Gane in his last fight. For whatever reason, the Surinamese kickboxer was rendered nearly inert for most of 25 agonizing minutes. While both men shoulder some blame for the dreadful fight, Gane won all five rounds. If he was able to do so using nothing but his jab and low kicks, he would have been a fool not to.

That brings us to this Saturday’s main event and Sakai. Sakai, like Gane, is a huge kickboxer who prefers to work at a deliberate pace. His loss to Alistair Overeem in his last fight was due to Overeem’s greatly superior ground game, a path to victory Rozenstruik seems unlikely to mimic. While nobody is calling for a return to the kamikaze rush that got him knocked out by Ngannou, Rozenstruik needs to show more urgency, because if he fights Sakai’s fight, he is apt to lose another plodding decision. Not only might that drop him out of the heavyweight rankings entirely, but the UFC will probably not reward such a performance with another headlining slot anytime soon.

Did You Ever Play “Serpientes y Escaleras,” Santiago Ponzinibbio?


No telling whether “Gente Boa” grew up playing the game Americans call “Chutes and Ladders,” but he is about to find out how apt a metaphor it is for the UFC welterweight division in which he works. Much like the capricious and grossly unfair board game — no, I’m not bitter — welterweight is a cruel world; a fighter must often string together a half-dozen or more wins just to merit mention in the rankings discussion, but a single loss can send them back nearly to square one.

Ponzinibbio did exactly that, racking up seven straight wins over solid opposition before being stopped by Jingliang Li in January. To the extent that mulligans exist in one of the most unforgiving divisions in the sport, Ponzinibbio gets one for that first-round knockout. He was coming back from a two-year layoff, it was a twitchy and tentative-looking four minutes of combat, and Li is a known knockout artist. However, that’s all the benefit of the doubt he’s likely to get. Facing red-hot undefeated prospect Miguel Baeza this Saturday, Ponzinibbio will either win, and pick up more or less where he left off two years ago; or lose, and truly go back to the back of the line in a way that he can ill afford at age 34.


For the most part, this column focuses on matchups where one fighter appears to have more to win or lose than their opponent, but De La Rosa and Lipski find themselves in a very similar situation, as fighters who need a win simply in order to not be seen as a bust. Both were the subject of lofty expectations as recently as two or three years ago: De La Rosa was a big, strong, savvy young grappler who won her first three Octagon bouts by submission, while “The Violence Queen” entered the UFC to considerable fanfare as a KSW champion, an aggressive muay Thai striker who was equally willing and aggressive on the ground. Lipski lost her first two bouts right out of the gate, while De La Rosa stumbled once she began facing true UFC-level flyweights.

Both have righted their ships to a certain extent, but of their six combined wins in the Octagon, five are over women who were subsequently cut by the UFC. They share a need for a prove-it victory over a good flyweight, and ironically, each represents that opportunity for the other. Despite the “disappointment” tag, De La Rosa and Lipski are still only 26 and 27 respectively. Both are talented, athletic, improving — and, should it come to it, marketable. Thanks to Valentina Shevchenko’s reign of terror, the division is wide open, desperate for fighters to string together two or three credible wins and grab the brass ring. For one of these two, that process might start on Saturday.