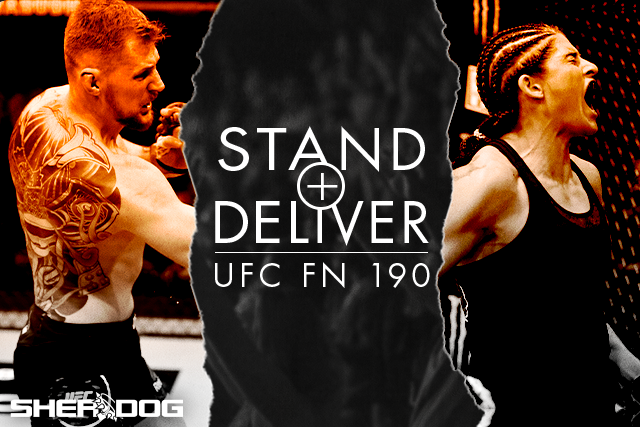 
In some ways, a win is a win and a loss is a loss. But while every fight matters, some feel as if they matter more. In some cases, the reasons are easy to define. Picture the fighter on a losing streak who knows he or she is likely fighting for their job; or conversely, any matchup on Dana White's Contender Series, where two hopefuls know that the brass ring is within their reach if they can win impressively. In other cases, a fight feels especially important for reasons that are harder to quantify, but no less real. Whether it’s the pressure of being a pioneer in MMA from one’s country, or the simple added spice of two fighters who really hate each other’s guts, that fight means just a little more.

This Saturday, the Ultimate Fighting Championship offers up UFC Fight Night 190, a 13-fight slate that runs the gamut from desperate loser-leaves-town scraps, to prove-it fights for tarnished prospects, to clashes between red-hot fighters with a possible rankings spot in the balance. Atop it all, the heavyweight main event between Ciryl Gane and Alexander Volkov is a likely title eliminator between two men who, aside from being Top 5 heavyweights who are strikers by preference, could not be much more different. Here are three fighters under special pressure to stand and deliver at “UFC Vegas 30.”

Make ‘Em All Choke on It, Alexander Volkov


Claiming to feel disrespected ahead of an athletic contest — in any sport — is so common that it has crossed over from cliché to full-on trope, to the point that we barely pay attention to winning fighters who rail that “everybody counted me out; nobody believed in me.” The counterexample is Volkov. To recap: As he heads into his 42nd professional fight, “Drago,” the former Bellator MMA and M-1 Global heavyweight champion, is 7-2 in the UFC, with the only losses coming to Derrick Lewis and Curtis Blaydes. The first came by knockout with 11 seconds left in a fight he had been winning handily, while the second was the kind of ground-based mauling that Blaydes has served on everyone not named Francis Ngannou. And that’s it. The rest of Volkov’s ledger is mostly one-sided wins, several of which were against Top 10 fighters, including a couple of the greatest heavyweights in MMA history.

For staking out a seemingly permanent place in the heavyweight rankings, for perhaps fighting to within one more victory of a title shot, what does Volkov get? The answer: second billing to a relative newcomer in 8-0 Ciryl Gane. Adding insult to…well, insult, as of the middle of fight week, the towering Russian is the betting underdog. However, that’s all fair play to those who make such decisions. The UFC makes matches and builds cards according to what they believe will sell. Sports books handicap fights according to who they believe more likely to win. (Well, they do it to try and drive action on both fighters while insulating themselves against risk, but it's based on who they think will win.) In any event, the only recourse Volkov has is to make everyone feel as stupid as possible for it. (See also: Jan Blachowicz earlier this year, though he at least had top billing thanks to his belt, rather than Israel Adesanya’s, being on the line.)

Those questions of respect are all about story, ego and emotion, however. There is also risk here, for Volkov’s long-term as well as immediate title prospects. Consider that while Volkov’s UFC losses came against the only two men who are indisputably ahead of him in the heavyweight pecking order, those losses are optically very different and they mean different things. Volkov’s loss to Lewis was such that, should the “Black Beast” end up as champ, a rematch would be a fairly easy sell. Meanwhile, Blaydes’ takedown clinic on Volkov left no real indications that a second go-round would look much different, so if Blaydes ends up with the belt, Volkov will always have a longer road than most. It’s the same problem Blaydes himself faces for as long as Ngannou is champion. Thus, while any loss to Gane would obviously be a setback, a bad loss would be disastrous, as the Frenchman, like Blaydes, is younger than Volkov and will be a roadblock, or at least an obstacle, for probably the rest of his UFC career.


Perhaps that headline is unfair, since “OSP” isn’t really running from anyone or anything. It’s more accurate to say that St. Preux has been running towards someplace, anyplace, that might turn his UFC career around. After a full decade as a dangerous yet wildly inconsistent light heavyweight contender in Strikeforce and the UFC, the 38-year-old Tennessean has spent the last year and change alternating between heavyweight and light heavyweight, with equally unsatisfying results.

This Saturday, it’s back up to heavyweight for a matchup with Tanner Boser. The spectacularly mulleted Canadian — that’s redundant, isn’t it? — is on a two-fight losing streak, has looked uncharacteristically inert in both of those losses, and has lost much of the surprising momentum he built after going 3-1 upon arrival in the UFC. It says a lot, then, that Boser is currently the favorite in their fight. Win or lose, St. Preux will likely still have a job come Sunday morning, but if he can’t pull off a head kick or his eponymous shoulder choke on a fighter of Boser’s level, he will be starting to look like a man without a competitive home.

That One Was a Fluke, Right, Julia Avila?


Six months ago Avila was, with a tip of the hat to Aspen Ladd, the hottest prospect in the UFC women’s bantamweight division. She was 8-1, the lone loss coming in under a minute due to a freakish and frankly grotesque finger injury. Better yet, she had quality wins. Leaving aside the victory over future Top 10 fighter Marion Reneau ultra-early in both women’s careers, Avila defeated Nicco Montano immediately before Montano entered, and won, Season 26 of “The Ultimate Fighter.” In her last two fights, she had beaten the eternally tough Pannie Kianzad, then blasted poor Gina Mazany all the way down to flyweight. The “Raging Panda” had all the look of a future title contender, and near-future at that.

All that momentum hit a wall, or at the very least one hell of a speed bump, against Sijara Eubanks last September. It isn’t simply the fact of the loss; on her best day, Eubanks is a Top 10 fighter on skill, and that was clearly one of her best days. The problem, as we often discuss here, is the optics. Avila’s calling cards have always been athleticism, aggression and physical strength. Against “Sarj,” they availed her little. In the first round, Eubanks slammed Avila all over the place — and that was Avila’s best round. In the second, Eubanks ripped herself free of locked-on submissions with sheer power; and in the third, she practically ignored those submission attempts, choosing to counter them simply by punching Avila in the face. The bully became the bullied.

Was that loss was just a rough night at the office for Avila, or an indication of her hitting a ceiling against fighters who can match her physicality? We do not yet know, but we find out starting this weekend against Julija Stoliarenko. The Lithuanian is nowhere near the athlete Avila is, and her “armbar or bust” game is about as one-dimensional as you will find in a top-level MMA promotion in 2021. Barring a late replacement or bizarre line movement, Avila will be the biggest betting favorite on the card Saturday. A win is the minimum needed here. Something dominant, one-sided and perhaps even brutal, something that reminds us just how awesome Avila has been, would be even better.
« Previous UFC Flyweight Champion Brandon Moreno Encourages Fighters to Never Give Up Next Luis Pena Charged with Punching Girlfriend, Breaking Phone in Alleged Assault »