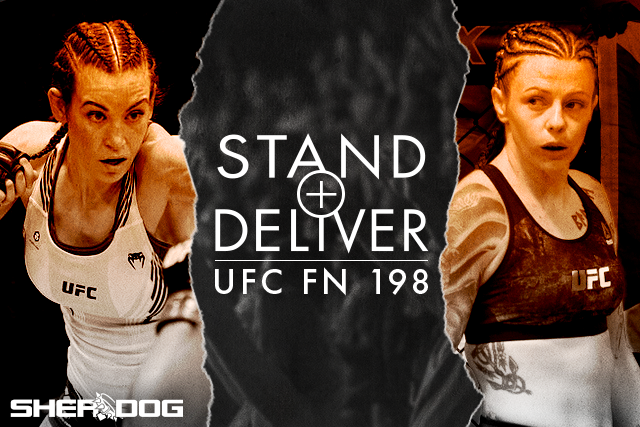 In some ways, a win is a win and a loss is a loss. But while it is true that every fight matters, some feel bigger than others, for whatever reason. In some cases, the elevated stakes are easy to define. Picture the fighter on a losing streak who knows he or she is likely fighting for their job; or conversely, any matchup on Dana White's Contender Series, where two hopefuls know that the brass ring is within their reach if they can win impressively. In other cases, a fight feels especially important for reasons that are harder to quantify, but no less real. Whether it’s the symbolic heft of being a pioneer in MMA from one’s country, or the simple added spice of two fighters who really hate each other’s guts, that fight means just a little more.

This weekend, UFC Fight Night 198 wraps up a marathon of 10 events in 10 weeks for the industry leader, before taking a week off for Thanksgiving and then getting right back on the horse for three more cards before Christmas. Perhaps not surprisingly, the lineup of “UFC Vegas 43” feels a bit like “leftovers night,” with fighters having been borrowed, fights pushed back, and matchups slapped together according to the whims of MMA unpredictability in general, and COVID-era chaos in particular. Notably, the enactment of a travel restriction on unvaccinated foreign fighters earlier this month resulted in a rash of bout cancellations and postponements that is likely to continue for a while.

Nonetheless, the dozen fights that makes up this weekend’s UFC offering are rich with backstory, surprising betting lines, and plenty of fighters with their backs against the wall — or something to prove, at least. Here are some fighters under a little extra pressure to stand and deliver at UFC Fight Night 198 “Vieira vs. Tate.”

I normally avoid highlighting main event fighters in this space whenever possible, simply because the stakes are usually obvious. However, Tate merits a mention here. The former bantamweight champ returned to the Octagon this summer after a self-imposed hiatus of over four years. Count me among those who were surprised; her retirement had been a relatively quiet one, notable primarily for her noncombatant VP role with One Championship and for having two children, none of which seemed to mark “Cupcake” as a likely candidate for a comeback.

Nonetheless, come back she did, and against an eternally tough out in Marion Reneau, Tate looked as good as ever, if not better. She had always been a plus athlete, a strong wrestler and a physical bully — against people not named Ronda Rousey, at least — but Tate stepped into the cage in July against Reneau looking stronger than ever before. It was a reminder that she had walked away from the sport in 2016 as a Top 10 fighter, maybe Top 5, and was still only 34. Against all expectations, Tate was right back in the thick of things at bantamweight.

That brings us to this Saturday and the “UFC Vegas 43” headliner, which may well be a title eliminator for Tate, if not for Vieira. Tate benefits from the fact that former champs tend to have an inside track on future title shots, a dynamic that is only amplified by her being one of the promotion’s most marketable stars. (It took a cup of Jon Jones’ pee and some UFC vs. Conor McGregor hardball for Tate to end up as the top name on the bill at the watershed UFC 200, but that doesn’t change the fact that it happened.)

The woman who thrashed Tate on that night in 2016, Amanda Nunes, is still the champ, and the UFC is likely to fast-track Tate to a rematch if it can. For that reason, this weekend’s headliner is the very definition of a fight with differing stakes for the participants. Vieira is dangerous, accomplished and somewhat anonymous, but lost her last fight — after missing weight, to boot. It is extremely unlikely that a win on Saturday would propel “Fenomeno” to a title shot, yet if Tate wins, she might well find herself a very interested cageside observer of Nunes’ title defense next month against her former “TUF” pupil Julianna Pena. On the other hand, if Tate loses to Vieira, the road to a title shot gets much, much longer and murkier.


First things first: Heartfelt congratulations to the bride, as the 34-year-old Glaswegian born Joanne Calderwood recently tied the knot with Syndicate MMA head coach John Wood. With that out of the way, “JoJo,” having dropped most of her last name, now needs to be careful not to do the same with her hold on the upper rungs of the flyweight ladder.

Wood has become almost a cautionary tale in the modern UFC, a “fight or wait” case study: Two years ago, after being declared the likely next challenger for flyweight champ Valentina Shevchenko, Wood elected to take a fight against Jennifer Maia at UFC Fight Night 173. It was a patently awful style matchup and Wood ended up losing by first-round submission, which allowed Maia to challenge for the belt a few months later. Since the Maia loss, Wood has gone 1-1, and the other woman to whom she lost, Lauren Murphy, earned an immediate shot at Shevchenko as well. In essence, Wood ended up turning herself from a title challenger into a gatekeeper with one fateful choice to stay busy and earn another payday.

(On the subject of “another payday,” it’s worth mentioning that all the way back in 2016, after her TKO of Valerie Letourneau at UFC Fight Night 89, a morose Wood posted a backstage video in which she confessed to being strapped for cash and “gutted” that her brutal finish of Letourneau had not netted her one of the UFC’s post-fight bonuses. The promotion handed her an unofficial envelope and the rest is history: Wood is an unwitting but significant milestone on the road to the weird, uncomfortable begging that follows 90% of UFC wins today.)

This weekend, Wood squares off against Taila Santos, who in many ways is her mirror image, in terms of UFC career arc. The 28-year-old Brazilian came out of Dana White's Contender Series with a bright and shiny 15-0 record — buffed up in large part thanks to the infamous record-padding Aspera FC — and promptly dropped her UFC debut to a marginal talent in Mara Romero Borella. Close observers of the Brazil fight scene, myself included, dismissed her immediately as another overinflated Astra Fight Team can crusher, but the strangest thing happened on the way to the dustbin of history: Santos ended up being a pretty damn good fighter. Since the Romero Borella loss, she has won three straight over credible opposition, and positioned herself as a possible title contender at 125 pounds.

That brings us to this weekend and the main-card tilt between Wood and Santos. In terms of booking and popular perception, this matchup is a case of feeding the old lions to the new. At roughly +250 as of the middle of fight week, Wood finds herself easily a bigger underdog than at any other outing of her career. This is a woman, after all, who entered the cage as the betting favorite against Murphy, Maia, Jessica Eye and Katlyn Chookagian, just to name four title challengers, and was nearly even money against Jessica Andrade, one of the top pound-for-pound women in the sport. Those days are over, and if Wood aspires to anything more than being a stepping stone for yet another candidate for the Shevchenko wood chipper — no pun intended — it starts on Saturday against Santos.

« Previous The Pride of Israel: Natan Levy’s Ascent to the UFC Next Valentina Shevchenko Talks Acting Role in ‘Bruised’ with Halle Berry »