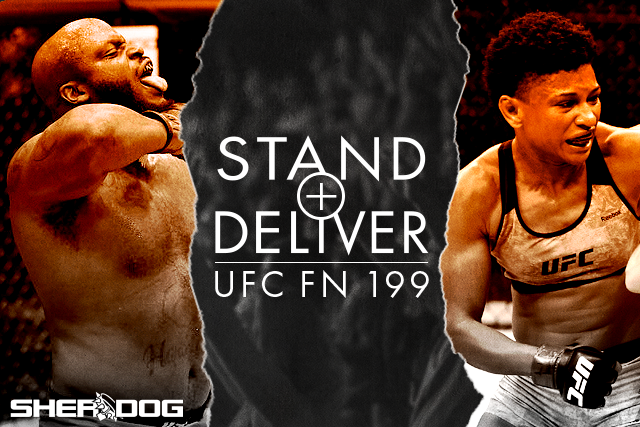 Every fight matters, but some matter just a little more.

In some ways, a win is a win and a loss is a loss. The difference between one fight and the next lies in what’s at stake. Picture the fighter on a losing streak who knows he or she is likely fighting for their job; or conversely, any title fight in a top regional organization, where the combatants know they are almost certainly being scouted by the big boys. At other times, a fight feels especially important for reasons that are harder to quantify, but no less real. Whether it’s the symbolic heft of being a pioneer in MMA from one’s country, or the simple added spice of two fighters who really hate each other’s guts, that fight means just a little more.

This weekend, the final Ultimate Fighting Championship outing of 2021, takes place at the Apex in Las Vegas, Nevada. While UFC Fight Night 199 can’t help but feel like a bit of a postscript, coming just one week after of the stunning, momentous UFC 269, it is a solid event in its own right, and one of the stronger ESPN+ cards of the second half of the year.

From top to bottom, the card nicknamed “UFC Vegas 45” is stacked with the kinds of prospect matches that fight night cards are known for, but also several fights that carry immediate implications for divisional title pictures. The Derrick Lewis-Chris Daukaus main event and the co-headliner featuring Stephen Thompson and Belal Muhammad both feature former title challengers fighting to keep their elite status against younger contenders looking to win their way to their own chance at UFC gold. The main card matchup between longtime contender Diego Ferreira and former KSW champ Mateusz Gamrot carries a slightly scaled-down version of the same dynamic. Those are all undeniably big fights, but in light of last weekend’s all-timer of an upset by Julianna Pena, however, the undercard clash between Raquel Pennington and Macy Chiasson suddenly looms large, and in fact, the woman who emerges victorious from that fight may be closer to a title shot than anyone else on the card.

Amid the 14 fights that make up Saturday’s card, there are of course some that carry higher stakes than a simple W or L, or a number next to a name in the final rankings of 2021. Here are some fighters under just a little extra pressure to stand and deliver at UFC Fight Night 199.

Now Would Be a Good Time for some Swangin’ and Bangin’, Derrick Lewis


Make no mistake: Lewis is under far greater pressure in Saturday’s main event than his opponent. “The Black Beast” is four years older than Daukaus, with twice as many professional fights and, most importantly of all, already has two heavyweight title fight losses on his record. While former UFC champs tend to have an easier path back to the top in terms of matchmaking, the opposite is true for multiple-time unsuccessful challengers. The onus will be on Lewis to prove that he is still a factor in the title picture in his own right, rather than settling into the role of a high-level gatekeeper and reliable knockout artist.

Lewis is a veteran who has fought what feels like just about everyone, while Daukaus represents a fresh matchup to most of the UFC heavyweight Top 15, but there’s more at play here than simple matchmaking. As of the middle of fight week, Lewis is a slight underdog, despite the facts that he is easily the highest-ranked opponent Daukaus has ever faced, and that Daukaus would be the lowest-ranked fighter to beat him in years. Part of that line may be due to recent optics: Lewis’ last outing was a one-sided beatdown at the hands of now-interim champ Ciryl Gane, while Daukaus is 4-0 in the UFC with four knockouts. However, part of it also may be due to skepticism about Lewis’ motivation. Will the Texan slugger, whose lax training regimen and perpetually nagging back injuries became almost a running gag, be truly motivated to take a step back and face a borderline contender looking to use him as a stepping stone? If so, if Lewis is truly committed to making another run at the belt, he would appear to be a rough matchup for Daukaus. If the doubters are right, and Lewis is preparing to enter the “deliver sound bites, throw haymakers, cash checks” phase of his career, the betting line is probably about right. Let’s see what Lewis has to say — and do — about it.

Now Would Be a Good Time for some “Overkill,” Angela Hill


It’s rare for me to use this space to shine a spotlight on fighters who are in danger of losing their job if they lose on the upcoming weekend’s card. With a UFC roster hovering just under 600, it’s a completely common and, generally speaking, not that noteworthy situation. Hill is an exception. The former Invicta FC champ is the most prolific fighter in the history of the UFC strawweight division and one of the most recognizable, but perhaps the most disappointing. The good news is that Hill is the division’s all-time leader in appearances with 18. The bad news is that she is 8-10, and two of those wins were against Ashley Yoder, who is 3-7 in the UFC. The good news is that Hill has always been, and remains, capable of stepping up on any given Saturday and absolutely schooling the UFC’s next big thing, like she did to Ariane Carnelossi and Konklak Suphisara. The bad news is that her own ceiling has become clear, as she has come up short against every Top 10 fighter she has faced in the Octagon.

That brings us to this weekend and Hill’s scheduled matchup with Amanda Lemos. If Hill loses, she will be 1-4 in her last five, with the only win coming against Yoder, who is herself 1-4 in her last five. That the UFC is even matching Hill up against Lemos on a four-fight winning streak, speaks eloquently to which basket the promotion is choosing for egg storage. Hill currently presents as a +300 underdog, the second-longest odds of her entire career after her matchup with former champ Jessica Andrade. The UFC’s roster moves are nearly inscrutable these days, but it certainly seems plausible that Hill, a charismatic cosplayer with some of the best weigh-in and walkout game in the promotion, could be fighting for her continued employment. A win would be ideal; a barnburner of a fight that reminds us of why she was so highly touted at the time of her signing would be a good consolation prize, and might be good enough for now.
SHARE ON FACEBOOK SHARE ON TWITTER
« Previous 5 Things You Might Not Know About Chris Daukaus Next Derek Brunson vs. Jared Cannonier Moved from UFC 270 to UFC 271 »
More
Latest News
+ VIEW MORE