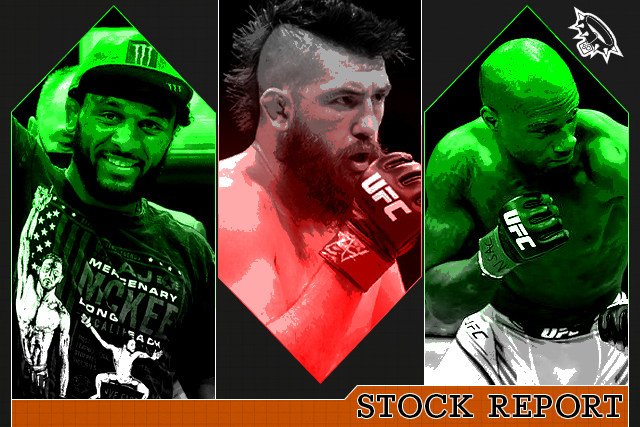 
It was a relatively rare case of MMA’s second-biggest promotion going toe-to-toe with the biggest, and this time, Goliath took one right between the eyes.

On Saturday, UFC on ESPN 28 and Bellator 263 ran nearly concurrently, forcing fans to choose — or switch channels constantly — and while the results of the ratings derby remain to be seen, in terms of the in-cage product, Bellator MMA’s offering trounced its Ultimate Fighting Championship counterpart. That’s due in part to the promotions’ relative effort levels meeting in the middle, as the UFC’s worst card this year was pitted against one of Bellator’s best ever. That gap in depth only grew wider when multiple fights were scratched from “UFC Vegas 33” during fight week due to Covid and weight issues, eventually leading to two women with 0-1 UFC records appearing in the co-main event. Against this decimated lineup, Bellator offered up a headliner with pound-for-pound implications atop a card refreshingly low on filler.

This column, however, is not about the fortunes of the promotions, but of the fighters who appeared on those dueling cards. With Bellator putting forth two of its greatest homegrown talents and a heaping handful of its top prospects, and the UFC giving us an all-time great night for underdogs, there was no shortage of men and women helping or hurting their stock. Here is the stock report for Bellator 263 and UFC on ESPN 28.


McKee’s incredible career ascent reached a true milestone in the Bellator 263 main event, as he stunned Patricio Freire with a head kick and — after a mistaken walk-off — choked him out with a guillotine. In under two minutes, the 26-year-old picked up the Bellator Featherweight Grand Prix title, Freire’s lineal belt and, arguably, the mantle of Bellator’s greatest fighter.

That’s an impressive-sounding night of work, but it doesn’t even do justice to the optics. The real story of the last few years of McKee’s career is that every time Bellator has presented him with a reasonable, well-thought out challenge, he has blown through it with effortless style and ease. Men like Georgi Karakhanyan, Pat Curran and Darrion Caldwell, instead of hurdles, have functioned as a series of doors that the “Mercenary” has kicked open without even slowing down. For a similar example of a young fighter developing at such an exponential rate that his promotion struggled to keep up, you would need to go back a decade, to pre-champ Jon Jones.

It seemed improbable that McKee would continue that trend against one of the top fighters in the sport, but he did exactly that, thrashing Freire in a way that nobody had in 40 fights. The most frightening thing about it all is that McKee is almost certainly still improving.


On a UFC card jammed with upsets, “Nite Train” shone not because of the odds — at +150 or so, he was far from the biggest underdog to cash — but because of the peripheral stuff. Stepping up on just a few days' notice, an impressive feat in itself for one of the largest men in the welterweight division, Gooden picked up his first Octagon win with a first-round lamping of Niklas Stolze. In so doing, he finally showed some of the speed and effortless power that had made him such an interesting get for the UFC last year. He also demonstrated a level of poise that had been lacking in his first two UFC outings against Alan Jouban and Abubakar Nurmagomedov. His roster spot secure for now, and with the Octagon jitters perhaps behind him, Gooden is suddenly one of the more intriguing unranked welterweights in the UFC.


While Gooden wasn’t one of the bigger underdogs who won at “UFC Vegas 33,” Barberena was one of the bigger favorites who lost. The problem with “Bam Bam” dropping a majority decision to Jason Witt is how little he looked like his vintage self. His customary punching power was in evidence; Barberena landed at least a couple of solid shots in each of the first two rounds, and had Witt in all kinds of trouble in the third. However, he was never able to force the kind of messy free-for-all that might allow him to land enough of those blows to finish the fight. Worse, Barberena’s normally reliable wrestling was at a severe and unexpected disadvantage against Witt, who was able to secure takedowns seemingly every time Barberena started to get any momentum going on the feet.

The question going forward is whether Barberena has been compromised by his recent surgery for burst arteries in his abdomen, and if so, whether he can return to his previous form. As one of the UFC’s standby action fighters, “Bam Bam” will have plenty of chances to show he’s still got it, but he will have something to prove the next time out.


There’s no reason to think that “Pitbull” has fallen off a cliff, even if he just suffered the first non-injury stoppage loss of his remarkable career. Before Saturday’s main event, his stock was at an all-time high, as the success of Michael Chandler in the UFC had helped to elevate Freire with it. He will squawk about the controversial details of the stoppage — count on it — but tap or no tap, he was taking a completely unprecedented kind of beating. There’s no way to spin that as a positive.

The question is what he will do next. An immediate rematch, whether at featherweight or at lightweight, with Freire’s other belt on the line, is quite likely, as the two men just finished knocking off most of Bellator’s top 145-pound contenders. Freire is a centerpiece of one of the best fight camps in all of MMA, and one of the most impressive things about him is the way he has continued to improve even after reaching the summit. However, immediate title rematches put enormous pressure on the losing fighter, lest they be left with no clear way back to the top — just ask Cody Garbrandt.
« Previous Matches to Make After UFC on ESPN 28 Next Sean Strickland Not Pushing for Title Shot: ‘I’m Probably The Last Person They Want as Champ’ »