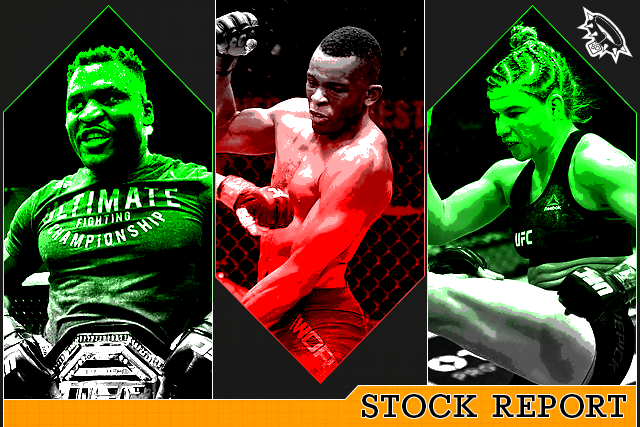 Not bad for perhaps the most extreme one-fight card in UFC history, eh?

With absolutely no disrespect intended towards any of the other fighters who competed at UFC 260, the loss of the scheduled featherweight title fight between Alexander Volkanovski and Brian Ortega was a crushing blow. It left the heavyweight main event as the only bout featuring two fighters in the Top 15 of their division. The rest of the 10-fight slate featured some late replacements, several fighters returning from long layoffs and a couple who were on dismal losing streaks. It all felt fairly low-stakes, especially on a night headlined by Stipe Miocic and Francis Ngannou, fighting for the most coveted piece of hardware in the sport and for their respective places in heavyweight history.

Despite everything that seemed to be stacked against it, however, UFC 260 was an eye-opening night of fights. There were some explosive finishes, some shocking performances and a few cases of fighters showing a ray of hope even in defeat. Several fighters raised their stock, while others fell. Here is the stock report for UFC 260.


It isn’t simply that “The Predator” won. After all, he was favored to do exactly that, and even the prop for “Ngannou by TKO/KO” was minus money at the betting window. However, there is a world of difference between braining a man in a wild 30-second slugfest, as Ngannou had done to his last few opponents, and the kind of measured, ruthlessly effective beating he laid on Miocic on Saturday. While Ngannou’s four-fight tear leading into the title rematch had been completely horrifying, it had given no real clues that he had shored up the issues with takedown defense and cardio that had cost him the first fight.

Thus, it was a complete revelation — for this observer, at least — to see Ngannou sprawl effortlessly on Miocic’s first level change. As someone who believes that an integral part of takedown defense is making the wrestler pay for trying, I was even more impressed to see Ngannou spin to the back and punish Miocic with a volley of punches as he stood back up. Miocic was apparently surprised and impressed as well; although the fight would go on for another round, that was pretty much the end of the champ shooting for takedowns. Ngannou also showed a level of poise and composure that was very much unlike their first fight, or any of Ngannou’s previous fights, for that matter, other than the weird aberration against Derrick Lewis.

The result was a crushing second-round knockout that, again, was far more impressive than a 20-second steamrolling would have been. Consider that Miocic has been caught and knocked out early before by Daniel Cormier, only to come back and definitely prove himself the better fighter. There was no such “just got caught” moment in Saturday’s main event, only a remarkable upgrade in skill and cage IQ on the part of Ngannou, and for that reason, there isn’t much reason to believe that a rubber match would go differently.


Like Ngannou, Maverick entered the cage at UFC 260 as a slight favorite, so winning was more or less expected. Also like Ngannou, the expected victory is nonetheless impressive because of what we learned about the winning fighter. Against Gillian Robertson, Maverick figured to have substantial advantages in strength, athleticism, striking and offensive wrestling, while Robertson was a dangerous grappler and would likely have the deeper gas tank. The fight played out that way for the most part, including a dominant Round 2 for Robertson during which she had Maverick’s back for half the round. The pleasant surprise came in Round 3, when Maverick hurt Robertson early, squashed a takedown attempt from the Canadian and then proceeded to ground-and-pound her on the way to winning the round decisively. Considering that Maverick had an admittedly hard weight cut, it was impressive that she won the final round, and won it in large part on the ground.

With the win, the 23-year-old Virginia native and PhD student remains one of the most promising prospects in the UFC. However, at just 5-foot-3, she gives up substantial height and reach to just about every top flyweight not named Jessica Andrade, and that disparity will border on the ridiculous if and when she is forced to move up to 135 pounds. If she can keep making the flyweight limit, showing off good cardio and beating solid 125 pounders like Robertson in their own wheelhouse, that’s a good sign for Maverick as well as for the division.


First things first: I considered Miocic the most accomplished heavyweight in MMA history before Saturday’s main event, and I still do. However, there’s no way to spin this as anything other than a serious setback, for Miocic’s immediate prospects as well as his historical standing. All of the observations I made regarding Ngannou come into play here, most importantly in that the UFC wants to get Jon Jones into the picture, and Ngannou’s extremely non-fluky-looking domination of Miocic gives the promotion plenty of reason not to book an immediate rematch.

That means that rather than getting the superfight with Jones that was the implied prize of UFC 260’s main event, with its earth-shattering implications for both men’s legacies as not only divisional, but pound-for-pound greats, Miocic is now on the outside looking in. He once famously sat out a year waiting for a title fight he believed was rightfully his, and it turned out to be a pretty good move on his part. But would he do so again as he turns 39, and would it even work this time? And if not, what will he do? Will he accept a booking against a lower-ranked contender? Would Miocic, whose last non-title fight was over five years ago, find any appeal in the risk-to-reward ratio of a fight with someone like Derrick Lewis, Curtis Blaydes or Ciryl Gane? These are all good questions and interesting ones, but they are not the questions I expected to be asking on Monday morning, and they are definitely not the ones Miocic hoped or expected to be dealing with.


Worthy has been a fun addition to the UFC. He signed on as an ultra-short notice late replacement at UFC 241 back in 2019 and absolutely walloped friend and former training partner Devonte Smith in one of the biggest upsets in Octagon history. When he followed it up with another upset by submitting Luis Pena last June, it felt as though we might have a story brewing: a 33-year-old late bloomer from the relative MMA backwater of Pittsburgh who entered the UFC to ultra-modest expectations, only to become an unlikely contender. Combined with his quirky, offbeat charisma, the back-to-back upset finishes put Worthy in the running to become one of those fighters who elevated themselves to stardom in the wide-open world of COVID-era MMA.

Sadly, it has not played out that way, and "The Death Star” appears to have reached the “bursts into flame as Rebel pilots scream away in their X-Wings” phase. Consecutive losses to Ottman Azaitar and on Saturday, Jamie Mullarkey, have evened up Worthy’s UFC ledger at 2-2. Mullarkey and Azaitar are both solid prospects, and there is no particular shame in losing to them, but the optics are concerning for Worthy’s general well-being, to say nothing of his Octagon career. Both losses have been quick and brutal knockouts; taking into consideration Worthy’s age, mileage and the fact that he had already suffered several clean knockout losses prior to joining the UFC, it’s anyone’s guess whether Worthy will get an Episode V in the Octagon, or whether it’s even a good idea.