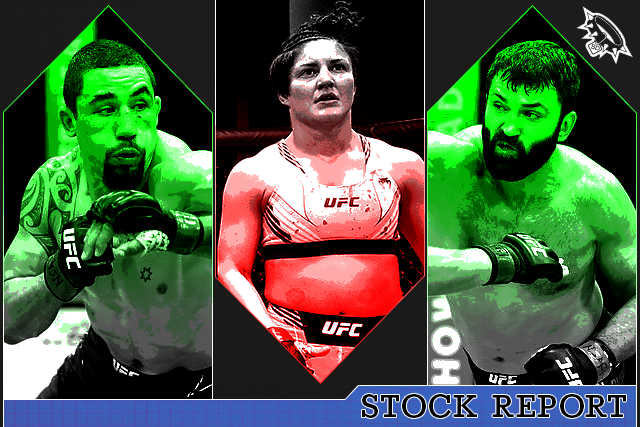 While the main event may have been booked by COVID-19, the rest of UFC on ESPN 22 managed to fall apart in different and exotic ways. The event dubbed “UFC Vegas 24” featured a weight miss so egregious that it scrapped the bout, a face-off shove that resulted in a hospitalization, and that was before the show even started.

Once the broadcast began, viewers were subjected to a slogging pace thanks to the UFC needing to fill a predetermined cable time block with two fewer fights than expected. That pace suffered further thanks to the Triller Fight Club boxing spectacle featuring former MMA star Ben Askren, which ran concurrently with the UFC’s offering and appeared to be intentionally counterprogramming its main event.

However, those are mostly production issues; window dressing, really. The bigger problem, once the dust settled, is that not many fighters came out of UFC on ESPN 22 looking all that great. The middle of the card was dominated by a run of four straight split decisions in which neither fighter really shone. However, at least a few of Saturday’s combatants ascended to new heights, proved their continued relevance, or indicated that they might have been written off a little too soon. Here is the stock report for UFC on ESPN 22: Whittaker vs. Gastelum.


This is the easiest call on the card. The -250 odds indicated general confidence that “Bobby Knuckles” was going to win the long-delayed matchup with Kelvin Gastelum, who stepped in a month ago when Paulo Costa fell ill with COVID. However, Whittaker went above and beyond, pitching a near-shutout in perhaps the best overall performance of his career to date. In taking all five rounds from Gastelum, the former champ showed incremental improvements to his already formidable striking, but the big surprise was his offensive wrestling. Long known for his outstanding takedown defense, Whittaker mixed in takedowns of his own, grounding Gastelum repeatedly and with apparent ease.

The follow-up question hanging over every Whittaker fight is, of course: “Has he done enough yet to earn a rematch with Israel Adesanya?” If the UFC commentary booth is to be believed, the answer is finally yes, after three straight wins over solid contenders. A chance to regain the title he lost in crushing fashion, even if he will be the underdog, makes Whittaker the fighter who elevated his stock the most at “UFC Vegas 24.”


It would be difficult to explain Arlovski’s remarkable longevity to a fan who came to the sport in the last five years or so. It isn’t just that he has been a high-level heavyweight for two decades — even if, as the only SEG-era signee still on roster, he was literally in the UFC before Dana White. No, the truly incredible part is that Arlovski never looked like the kind of fighter who would still be competitive against UFC-level heavyweights in 2021. A full decade ago, the word on “The Pit Bull” was that his chin was shot, his athleticism was slipping and he was very much on the tail end of his career. He has endured multiple four-fight losing streaks and bounced back each time. Against Chase Sherman on Saturday, the 42-year-old Belarusian entered as a slight underdog to a fighter with a 3-5 Octagon record, and once again turned back the clock, making adjustments during and after a tough first round to win with relative ease. He will probably never again make a run for UFC gold, but if he wants to fight for another year or two, as he claimed in the wake of the Sherman fight, who are we to say no? Not only is he still winning fights, but outside of the elite of the elite UFC knockout artists — Jairzinho Rozenstuik, Ciryl Gane — nobody is really threatening that supposedly compromised chin.


The fight was a feel-good story: Jessica Penne, who had been on a losing streak before missing out on four years of her career thanks to a ridiculous overreaction by USADA, returned to the cage and notched her first win since 2014. Her emotional reaction was so raw and unguarded that it even appeared to crack the layer of ice around her longtime teammate Dominick Cruz, who was on color commentary.

The flip side of Penne’s redemption arc, however, was Godinez falling short in her UFC debut. Yes, “Loopy” looked a bit undersized, but if she wants to fight in the UFC strawweight division, she’d better get used to the feeling. And yes, Godinez arguably won the fight, but the real problem is that it shouldn’t even have been split-decision close. As soon as the fight began, the difference in speed and explosion between the two women was stark. Like Danielle Taylor, another smallish strawweight who handed Penne her last loss before the suspension, Godinez bounced into punching range at will, landing on the rangier but slower Penne. Unfortunately, Penne made some smart adjustments while Godinez failed to do the same. Notably, early in the fight Godinez tried to throw Penne with a scarf hold headlock that worked on LFA strawweights but failed miserably against the taller, wily Penne. Godinez returned to that poison well several more times, despite the fact that Penne stepped behind and took her back each time. Godinez has a high ceiling as a prospect, and with just six fights under her belt, she should keep improving for a long while, but this was unquestionably a setback.


“Judo Thunder” has had a miserable run of late. A couple of years ago, he was a promising UFC welterweight, a knockout machine on the rise. He then missed a big chunk of time fighting rape charges that turned out to be specious, returned to action in 2020 and lost his first two fights back, missing weight both times. Alhassan moved up to middleweight for Saturday’s matchup with Jacob Malkoun, a 4-1 fighter who had been kind of a head-scratcher signing by the UFC, and had gotten knocked out in 18 seconds by Phil Hawes in his Octagon debut. The stage appeared to be set for Alhassan, a massive favorite, to get back on track — probably with some more fodder for his highlight reel.

Instead, Alhassan found himself on the receiving end of an absolute clinic in wrestling, top control and clinch work against the cage. Malkoun and his team could scarcely have drawn up a better game plan to neutralize the knockout power of a fast-starting, explosive puncher, and “Mamba” executed it to perfection. It’s anyone’s guess whether Alhassan will get another shot in the Octagon, but if he does, he has his work cut out for him after three demoralizing losses.


A year and a half ago Fairn and Norma Dumont were signed by the UFC and immediately fed to top contenders such as Megan Anderson and Felicia Spencer. While the results were predictably one-sided, Fairn and Dumont had fewer than 10 professional fights apiece, almost none at a particularly high level. They looked like two women who might keep improving with experience, while providing some much-needed depth to the featherweight division. And they might have done just that, except that Fairn and Dumont have spent the time since their respective debuts trying and failing miserably to drop to bantamweight. Dumont thrashed Ashlee Evans-Smith last November, an accomplishment that was marred by the fact that she weighed in at 139.5 pounds. Against Erin Blanchfield, a flyweight stepping up on short notice, Dumont again tipped the scales at 139.5, this time causing the bout to be cancelled.

Fairn, apparently not having learned anything from Dumont’s mistakes, is making her own. She was scheduled to meet UFC debutante Josiane Nunes in a 140-pound catchweight bout at UFC on ESPN 22, and missed so badly that she wouldn’t even have made the featherweight limit. It’s slightly baffling that these women are so bent on fighting at bantamweight rather than featherweight, considering that both belts are defended by Amanda Nunes. Not only do the 135 and 145-pound roads end in the same place, but the featherweight route to a title shot is far, far shorter.