The time has come to put one’s mind on the real stories for which Strikeforce “Diaz vs. Noons 2” has set the table. Read on and become the cool kid in the forums -- kind of like being the cool kid at the comic-con.

Nick Diaz undoubtedly deserved the unanimous decision win he took over K.J. Noons on Saturday at the HP Pavilion in San Jose, Calif. However, the Stockton, Calif., street-fight champion emeritus did little to back up the popular notion that he can hang with the super-elite of the 170-pound ranks, as he struggled at times against a boxer who should be fighting at lightweight.

Perhaps the most surprising -- or disheartening for those who consider themselves fans of the area code 209 crew -- part of the fight was when Diaz started changing levels for ineffective single-leg shots. Fans undoubtedly flashed back to the days when Diaz lost competitive decisions thanks to his sub-standard wrestling skills.

That Diaz has not improved his wrestling in any appreciable way might soon become a grave problem for him in light of the sudden deluge of quality contenders in the Strikeforce welterweight division.

Talk should surround Gesias “JZ” Cavalcante’s gutsy decision win over Josh Thomson. Instead, the MMA world finds itself stuck with a fresh batch of judges to ridicule. Thankfully, nothing the judges do can change the fact that Strikeforce has stacked its lightweight division with world-class fighters.

Odds are Strikeforce will give Thomson a trilogy bout with reigning champion Gilbert Melendez and pretend the events at ‘Diaz vs. Noons 2’ never happened -- a somewhat understandable move given the promotion’s desire to keep Melendez in the spotlight. However, the promotion remains stuck with a fuzzy contender’s scene dying for some cogent matchmaking.

Between JZ, Noons, Lyle Beerbohm, Vitor “Shaolin” Ribeiro and an ongoing talent exchange with Dream, Strikeforce has the makings of a division that could deliver the kind of consistent excitement the organization needs for its cards.

Women’s MMA Movin’ on Up 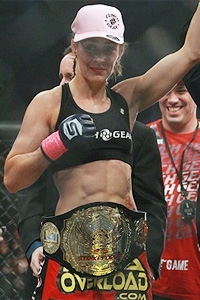 File Photo
Marloes "Rumina" Coenen
The pace has seemed glacial at times, but women’s MMA has gained steam, and Strikeforce has played a critical role in keeping that branch of the sport’s legitimacy intact. The payoff has started to come together now that the quality of competition continues to improve and there are legitimately marketable champions around which to build.

Cristiane “Cyborg” Santos’ grisly dominance at 145 pounds seems almost a given, but now that Marloes Coenen has supplanted Sarah Kaufman as the 135-pound queen, new life has sprung in what was considered a stagnating division. The division still needs to develop a ton of new talent, but Coenen’s exciting style and winning personality make a good palliative for the time being.

Crazy as it may sound, women’s MMA is slowly but surely chipping away at the sexism that often holds back female sports. Strikeforce’s handling of its female fighters has not been perfect, as it needed to find Santos a decent challenger six months ago. With that said, women’s MMA being delivered as a true sport by a legitimate organization puts Strikeforce miles ahead of the promoters that turned women’s boxing into a joke.

Dragged to the Woodshed

Tyron Woodley stands as living proof that Strikeforce can develop a prospect over time. And what a prospect he has become. Snuffing out Andre Galvao in less than two minutes was just the beginning for Woodley, as he has the inside track on title contention. Considering Diaz’s susceptibility to quality wrestlers who can strike, it may be just a matter of time before “T-Wood” wears the gold.

Another solid performance from Pat Miletich only added more fuel to the growing sentiment that he has become MMA’s best on-air analyst. His wry sense of humor, technical knowledge and clear-headed analysis make him a must-start option in any MMA commentary fantasy league.

Follow Tomas Rios as he bashes on nerds while reading Orson Scott Card on Twitter at www.twitter.com/Tomas_Rios.