With his title-winning performance over Rafael “Feijao” Cavalcante at Strikeforce “Feijao vs. Henderson” on Saturday at the Nationwide Arena in Columbus, Ohio, Dan Henderson added the Strikeforce light heavyweight belt to his considerable trophy case.

Below, a closer look at the storylines that emerged from the event.

Fair or not, a recognizable face holding a belt is an added boost for a promotion. Henderson’s win helps Strikeforce in many ways. First, it redeems its decision to sign him away from the UFC, allowing him to bring precisely the kind of mainstream legitimacy the promotion sought in bringing him aboard.

It is much tougher for foreign fighters to be appreciated by a fickle stateside audience; we are talking primarily about casual fans, people who would use “UFC” where “MMA” would suffice. Henderson as champion creates a rarified link to every major fighting organization that has ever existed. When you are the second-ranked MMA organization trying to make up ground on the behemoth-sized competition, things like this are invaluable.

With Henderson as the new champion, he has the chance to end the Strikeforce light heavyweight title curse. Past champions Cavalcante, Muhammed “King Mo” Lawal, Gegard Mousasi and Renato “Babalu” Sobral lost it in their first defense.

You have to go back to Bobby Southworth’s win over Anthony Ruiz in June 2008 for the last time it was defended successfully.

A run of successful title defenses is never a bad thing, allowing an organization to build a champion’s profile and storyline, but the talent level and styles of the top 205ers in the division could continue the trend of the belt changing hands. Lawal bested the gifted Mousasi and figures to only get better, while Mousasi, who faces Mike Kyle on April 9, might have the tools to beat just about anyone on a given night.

The reason title-changing bouts might be better for Strikeforce is that it prevents the alternate scenario, where a fighter cleans out his division and faces nothing but rematches as future defenses; here’s looking at you, Georges St. Pierre, but hopefully you are looking at Jake Shields for the moment.

One thing is certain. Whatever combination of Henderson-Mousasi-Lawal-Cavalcante is in there, it is almost certainly going to be an explosive and exciting fight.

It would not be a surprise to see the “curse” continue, with the title changing hands several times over the next two years. It also gives Strikeforce time to develop up-and-coming prospects like Ovince St. Preux and further stock the cupboard for the months and years to come. 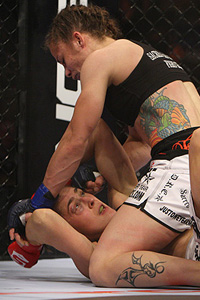 Though it was an hour and a half into the telecast, Strikeforce offered a strong segment promoting the next two fights in its heavyweight grand prix.

Moved to June 18 in Dallas from its originally slated date of April 9, the tournament is Strikeforce’s ace card in the deck; in a year where the UFC’s heavyweight division is on championship hiatus until Cain Velasquez heals from shoulder surgery, Strikeforce has a huge opportunity to grow its presence with fans and the general public by offering this tournament.

It should be pushed and promoted at every opportunity.

When Liz Carmouche spent several minutes mounted on Marloes Coenen in the second and third rounds, the first thing one noticed was she was not throwing elbows.

This is because elbows on a downed opponent are not allowed in Strikeforce.

The result of this position is that it becomes a lot harder to finish an opponent with meaningful strikes. The fighter on the bottom, knowing full well elbows are not in the mix, simply covers their head with forearms and hands and rides it out.

It is hardly an enviable position to be in, but the ban on elbows makes it a much less disadvantageous position for the mounted fighter. It has proven difficult to land anything of substance with a punch from there and equally hard to miss anything meaningful when driving an elbow home.

Antonio Silva was in the same position in the second round of his fight with Fedor Emelianenko. In his case, lack of elbows did not backfire on him -- Silva sitting on you for five minutes would finish most people -- but it did for Carmouche.

Elbows on a downed opponent are the most effective weapons for a fighter that has taken down his or her opponent, particularly in half-guard, side control and mounted positions. It is time to include them so the game resembles the tactical feel and flow of most MMA organizations. Otherwise, a fighter getting mount is sometimes relegated to what seems like a stall position, trying to punch through forearms and gloves.