That was the first thing that came to mind after seeing the battered right eye of Fedor Emelianenko that prompted a doctor stoppage in the main event of Strikeforce “Fedor vs. Silva.”

The Russian legend took a terrific pounding from Antonio Silva Saturday night inside the Izod Center in East Rutherford, N.J., but the jury’s still out on whether Strikeforce’s heavyweight grand prix sustained a worse beating in losing its marquee name in the opening round.

After Emelianenko spent nearly five minutes on his back, pinned beneath the giant Brazilian in an excruciating second round, the greatest heavyweight in the history of mixed martial arts suffered his second consecutive loss and a tough blow to his current prospects.

Also on the card were another quarterfinal and a trio of reserve bouts for the heavyweight grand prix. Below, a look at the stocks of Emelianenko and the other fighters involved in the suddenly Fedor-free tournament.

Antonio Silva
Silva became the second man in a row to slay Emelianenko, and he did so impressively.

A 5-1 betting underdog, it looked as though “Bigfoot” had his hands full early, as Emelianenko started quickly with aggressive strikes. But Silva popped Emelianenko with a couple of key counter-punches in the first round, stemming the tide of what seemed to be a mounting onslaught. He would not be cowed.

Silva recovered nicely, battling back to stay competitive in the first and planting Fedor on the mat.

The second round was grossly one-sided, with Silva nailing a quick takedown and delivering a mixture of ground-and-pound and a nice bit of grappling to mount Fedor.

Silva controlled the bout expertly from that point, sinking in a deep arm-triangle choke from which Fedor impressively escaped, and a kneebar the end of the round, which Emelianenko slickly countered with a submission attempt of his own.

Emelianenko showed tremendous heart by staying in the fight, but his right eye was swollen shut. After some confusion regarding the ruling, he was declared unable to continue, giving Silva the biggest win of his career.

Sergei Kharitonov
The Russian veteran was his classical self in dispatching Andrei Arlovski at 2:49 of the first round. Kharitonov is a plugger who pushes forward, making small adjustments and suddenly overtaking his opponents. The bout seemed like a good matchup for Arlovski, given Sergei’s style, but Kharitonov is a hard-nosed type not easily dismissed.

After eating a few shots from Arlovski, Kharitonov only seemed to warm up, coming on and finishing the former UFC heavyweight champ with a left hook and pinpoint ground punches.

Slotted next against the winner of the April 4 Josh Barnett-Brett Rogers bout, Kharitonov is sure to remain fun to watch, win or lose. This was a big performance from him, even if he was facing seemingly damaged goods in Arlovski.

Chad Griggs
In a lively reserve bout, Griggs wasted no time in punching out blue chip prospect Gian Villante. Just as in his upset win over Bobby Lashley last August, Griggs showed his ability to stay cool in a heated contest. Villante’s technique and headiness went out the window as Griggs pounded away for a first-round stoppage.

Griggs is definitely a tough and entertaining heavyweight to watch, and he gave his career a shot in the arm tonight. 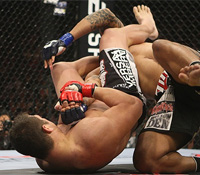 D. Mandel
Del Rosario won easily.
Shane del Rosario
After eating some heavy leather and being taken down by Lavar Johnson, Del Rosario rebounded en route to an armbar submission win at 4:31 of the opening stanza. Rosario is an interesting heavyweight to watch as he progresses. Moving to 11-0 tonight, he’s still a little bit undersized, falling in the 235- to 240-pound range, but he has decent standup and a well-rounded ground game.

After some feeling out on the feet, Overeem nailed a simple single-leg to set up the submission. It was a good win for him, but Sefo’s ground game is clearly a work in progress, hence the “hold” rating. Overeem raised his record to 29-25, which is good for a major league baseball pitcher, but not likely to send tremors through the hearts of fellow Strikeforce heavyweights.

Gian Villante
A natural 205-pounder, Villante moved up to heavy and acquitted himself fairly well against Chad Griggs, showing some decent hands and aggression. Villante seemed dazed on his feet early in the bout, but sleepwalked through several exchanges before finally being finished.

Don’t be fooled by the performance, though: Villante is a good athlete whose wrestling chops will translate better at light heavyweight. He’ll probably learn and get better from this experience.

Fedor Emelianenko
The “Last Emperor” remains the most accomplished heavyweight in the history of the sport, and his seven-year reign as the game’s eminent big man was a hallmark of consistency and ruthless technical efficiency.

Against Silva tonight, outside of the opening three minutes where he was aggressive and looking his old self, Emelianenko resembled an aged fighter.

Fedor still has his vintage toughness, taking a frightful pounding in a nightmarish second round with Silva on top of him, but it’s apparent that his best days are behind him. The Russian also seemed to tire in the opening round, after his guns-blazing assault failed to faze Silva. If there is anything tonight’s fight could have used, it was closure. Fedor’s swollen eye was enough to stop the bout after the second round, but anybody who’s watched him since his Pride days could not help but wonder if the great Fedor would have rallied in the third to snatch victory from the jaws of defeat.

That Fedor has been forced to make these comebacks more and more frequently in recent bouts is troubling. Who knows what Fedor and M-1 Global decide to do from here, but with a semifinal bout against the Fabricio Werdum-Alistair Overeem winner scuttled in the wake of Silva’s upset, Emelianenko would probably be best served by retiring now.

Ray Sefo
A quick submission loss on a major card, especially by way of neck crank, is never a good outing. Sefo, an all-time kickboxing great, is 40 years old and bravely attempting to forge ahead with an MMA career. So far, it’s apparent that he’s got a lot of work to do. At his age, it might be a project without a discernible upside.

Lavar Johnson
One of the more inspiring stories in all of MMA, Johnson has recovered from multiple gunshot wounds sustained in a senseless shooting at a family reunion in Bakersfield, Calif. He started off impressively against del Rosario, even getting a takedown, only to be mounted later and armbarred. Johnson is exceptionally gifted, with heavy hands and good speed for his size, but his modest ground game was once against exposed here.

Andrei Arlovski
It has been five years since Arlovski looked invincible, demolishing UFC heavyweights with a potent mixture of deadly striking and overwhelming athleticism. At the time, the UFC heavyweight roster paled in comparison to Pride’s, and Arlovski seemed the sole candidate for a fantasy showdown against Emelianenko.

Now, with four straight losses, including three by knockout, Arlovski’s career is in a brutal tailspin. Coming into the bout, conventional wisdom held that Arlovski had more talent, while Kharitonov had more grit and could possibly will himself to victory. After suffering another definitive knockout, it’s apparent that Arlovski does not have the mindset of the killer he used to be.