Dan Henderson’s right hand is a guilty pleasure -- so much fun to watch and so not fun to get with hit with.

Fortunately, few of us will ever feel its impact, but on Saturday in Columbus, Ohio, Rafael “Feijao” Cavalcante did, as he was promptly disconnected from his senses and his Strikeforce light heavyweight championship belt. In doing so, Henderson becomes the first man to win a UFC tournament and hold titles in Pride Fighting Championships and Strikeforce -- an impressive Triple Crown achievement.

In the co-main event, Marloes Coenen retained the women’s welterweight crown with a come-from-behind submission of Liz Carmouche.

Below, a closer look at who’s up and who’s down in the Strikeforce “Feijao vs. Henderson” Stock Report:

Dan Henderson: At 40 years young, Henderson showed veteran savvy in dismantling Feijao, who was putting up a good scrap before he was taken out. In the opening round, Feijao -- whose takedown defense and exceptional base gave Muhammed “King Mo” Lawal fits in his title-winning effort in August -- seemed to be planting the seeds for an upset.

He even stunned Hendo with a sweeping right hand, sending him toppling to the canvas. However, when Feijao pounced for the kill, Henderson reversed position and took time to clear his head in his opponent’s guard. In the second round, Henderson parked himself and Cavalcante against the cage several times, working takedowns and playing the percentages.

As Randy Couture has shown, this strategy works very well for aging wrestlers, as they can linger there all day, like a retiree at a buffet perusing the spread. Some call it “wall and stall,” but it is a good tactic, as one does not get caught with wild stuff on the outside, and wrestlers of Henderson’s caliber are certainly not going to be outwrestled.

Then, eyeing Cavalcante from range, Henderson sprang, landing a grazing right hand that sent the champion crashing to the canvas. Jumping in with a six-punch finishing salvo that was classic Henderson, it was over. Once again, the tough veteran took care of business and did so in fairly unscathed fashion.

Liz Carmouche: Fighting on less than two weeks’ notice, Carmouche, subbing for an injured Miesha Tate, put on an inspired performance against champion Marloes Coenen. Using solid wrestling and a nothing-to-lose approach, she took the fight to Coenen, staying in mount for extended periods in the second and third rounds. 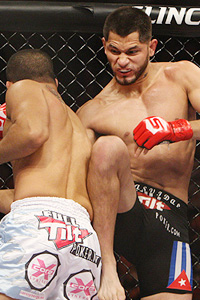 D. Mandel
Masvidal (right) picked his foe apart.
Then, in the fourth, Coenen saw and opening and took it, isolating an arm en route to a slick triangle submission. Carmouche, undefeated entering the bout, showed a lot of ability and tenacity, especially given the situation. She was unfazed and gave Coenen an extremely tough go, especially in tie-ups and on the ground. Carmouche is definitely a fighter to watch in the Strikeforce 135-pound women’s division.

Jorge Masvidal: In a workmanlike performance bereft of big moments or danger, Masvidal’s experience carried him to a unanimous decision over the previously unbeaten Billy Evangelista. It played out in a variety of ways, from positional scrambles to choosing when to strike, and Masvidal’s veteran wares were clearly the difference here.

However, in the Strikeforce 155-pound division, a breakneck pace has been set by guys like champion Gilbert Melendez and top contenders Tatsuya Kawajiri and Josh Thomson.

Masvidal’s laconic approach may have been tempered by the confidence that he was going to outpoint Evangelista by playing the percentages and keeping it more tactical than fast-paced. Still, it was a solid win for the American Top Team representative in his return to Strikeforce.

Rafael “Feijao” Cavalcante: One cannot fault Cavalcante, who had a positive showing until Henderson knocked him out. The Brazilian has a strong skill set and showed it in spots. While his park-on-the-cage-and-wait strategy worked in tiring Lawal, it did not wear out Henderson. With that said, Feijao remains a solid light heavyweight.

He may have missed winning the bout literally by a couple of inches. After stunning Henderson in the opening round, Cavalcante missed a flying bomb that “Hendo” narrowly escaped on the ground. Like football, MMA is often a game of inches, and if that monster had landed, Cavalcante might still be champion.

Marloes Coenen: With a great submission in the fourth round that took out the upstart, late-replacement challenger, Coenen showed a champion’s heart. Outstruck 221 to 48 in the bout, she rendered it moot with the finishing triangle.

However, she gets a “hold” rating here. Why? While it was a gutty performance, seeing Coenen get outwrestled by Carmouche for most of the fight must have had Tate eager for a crack at the champion. Tate, who injured her knee and pulled out of the bout, is likely next for Coenen. One can bet the Golden Glory rep will be honing her wrestling to deal with “Takedown” Tate.

Tim Kennedy: After a tense couple of minutes in the opening round, Kennedy, who had been stuffed on his first three takedown attempts, finally nailed one. That signaled the end for the dangerous Melvin Manhoef.

There were no mysteries coming into the bout -- Kennedy needed a ground fight, and Manhoef wanted to keep it standing -- and it played out precisely as most expected it to if Kennedy got Manhoef down. Afterward, Kennedy cited interest in a match against “Ruthless” Robbie Lawler. That is a solid fight and one in which he would be better tested, especially since Lawler’s big power and takedown defense would match up well against his.

Billy Evangelista: Unbeaten coming into his bout against Masdival, Evangelista simply could not get untracked. The larger Masdival stuffed his takedown attempts and outpointed him on the feet. Losses like this are an expectable part of developing experience for a fighter, and in Evangelista’s case, he will have to make some adjustments to progress at this next level.

Melvin Manhoef: As usual, Manhoef was eminently dangerous standing and overmatched on the ground. However, he did show some excellent takedown defense in defying Kennedy’s first three takedown attempts. Still, his getting submitted via rear-naked choke shows how much the fourth one counted.