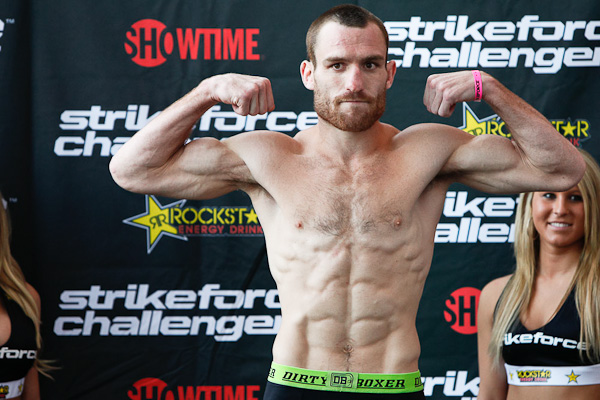 
Talk about going from the penthouse to the outhouse.

Originally booked to challenge Gilbert Melendez for the lightweight championship in the main event, Pat Healy instead finds himself relegated to duty on the Strikeforce “Marquardt vs. Saffiedine” prelims on Saturday at the Chesapeake Energy Arena in Oklahoma City. With Melendez and his replacement, American Top Team’s Jorge Masvidal, out of the picture because of injuries, Healy will toe the line against unbeaten newcomer Kurt Holobaugh at the Strikeforce finale.

A far cry from Melendez or Masvidal, Holobaugh sports eight finishes among his nine career victories, having delivered five of them inside one round. The 26-year-old last appeared under the Fight Force International banner in October, when he knocked out Wesley Dunlap, who was 0-2 at the time, in a little less than 90 seconds at the Biloxi Civic Center in Biloxi, Miss. Holobaugh scored his most significant win in April, when he submitted EliteXC veteran and Rich Clementi protégé J.C. Pennington with a third-round triangle choke.

Healy’s demotion from headliner to undercard afterthought is but one reason to tap into the Strikeforce “Marquardt vs. Saffiedine” prelims, which air at 8 p.m. ET/PT on Showtime Extreme. Here are four more: File Photo
Gracie feels the pressure of the name.
Ten-time Brazilian jiu-jitsu world champions tend to draw attention to themselves, whether they are playing checkers or climbing into a cage for a full-contact prizefight.

Outside of an ill-fated knockout loss to Muhammed Lawal in 2011, Roger Gracie’s transition to mixed martial arts has gone according to plan. A two-time Abu Dhabi Combat Club Submission Wrestling World Championships gold medalist, the 31-year-old London-based Brazilian has submitted three opponents inside the first round. Gracie righted himself in his middleweight debut, scoring a unanimous verdict over battle-hardened UFC veteran Keith Jardine in July.

A surging Anthony Smith awaits him on the undercard. The well-traveled 24-year-old has recorded nine wins in his past 10 outings. Smith returned to the Strikeforce cage in August and made the most of the opportunity, as he submitted Lumumba Sayers with a first-round triangle choke. A potent finisher, he has secured 16 of his 17 professional victories by knockout, technical knockout or submission.


Tim Kennedy twice fought for the Strikeforce middleweight crown, but he will close out his tenure with the company far away from the spotlight’s glare.

Kennedy will answer the bell against submission ace Trevor Smith, as he looks to avoid back-to-back defeats for the first time in his career. The 33-year-old combat veteran came up short in his bid to unseat middleweight titleholder Luke Rockhold in July, dropping a unanimous verdict to the American Kickboxing Academy standout. Wins over Jason “Mayhem” Miller, Dutch knockout artist Melvin Manhoef and former EliteXC middleweight kingpin Robbie Lawler buoy Kennedy’s excellent resume. Notoriously durable, he has been finished only once -- it was on a cut -- in his career.

Smith generally follows one path to victory. The 32-year-old Ring Demon Jiu-Jitsu representative has posted 10 wins as a professional, nine of them via submission. Smith rarely waists time, as 11 of his 12 bouts have come to a close inside one round.


K.J. Noons has become something of an enigma.

An accomplished boxer blessed with skilled and precise hands, Noons captured the EliteXC lightweight championship in November 2007 and held it until the company closed for business a year later. Still, he has remained inconsistent in MMA, with wins over Nick Diaz, American Top Team’s Yves Edwards and Andre Amado offset by defeats to Charles Bennett and Buddy Clinton. Now 30, Noons will enter the cage for his final Strikeforce bout staring at an uncertain future, with losses in three of his past four fights.

Noons draws a difficult assignment in Ryan Couture, the cagy and resourceful son of UFC hall of famer Randy Couture. The 30-year-old will enter the matchup on a three-fight winning streak.


Everyone knows the book on Jorge Gurgel: accomplished grappler who has largely abandoned the ground game despite the fact that he has never knocked out anyone in mixed martial arts competition. He lets his fists fly, strategy be damned.

On the backside of his career, the 35-year-old Brazilian jiu-jitsu black belt owns a 1-3 mark in his past four appearances, though his struggles can be traced back to his time in the UFC, where losses to Cole Miller and Aaron Riley resulted in his 2008 release. A longtime training partner of onetime UFC middleweight champion Rich Franklin, Gurgel will look to restore some order to his career when he confronts Dream veteran Adriano Martins.

A Jungle Fight mainstay in his native Brazil, Martins has won 10 times in 11 outings. The 30-year-old has put away his last three foes in the first round and needed only 62 seconds to dispatch Jimmy Donahue with punches at Jungle Fight 37 in March. In 29 career appearances, Martins has been knocked out only once. He has never been submitted.