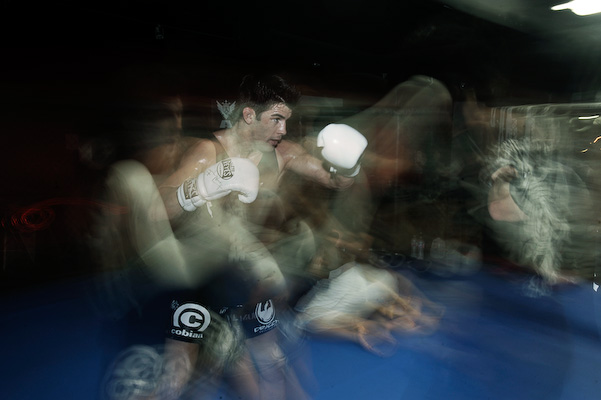 We open Week 2 with live footage of two unidentified fighters warming up to square off live at the end of the episode, followed by a quick recap of last week’s action.

The new format is explained by UFC President Dana White, who informs us that viewers will be privy to the happenings inside the fighter house each week prior to a live fight at the end of every episode. The setup ends quickly, and the fighters pile out of several vans and scurry into the house, immediately going for the beds and the beer mugs. Sandwiches are made, and the troops manage to bro it up without getting drunk and destroying the mansion.

We cut to “The California Kid” taking his team through its first practice. He counts up his wrestlers and begins transforming the misshapen balls of clay into potential alpha males.

“Urijah Faber is the man,” says Ogle in a thick English accent. “He’s the gaffer. He’s the one leading the troops to war. I’ve got all the trust in the world in him, and I couldn’t ask for a better team.”

Faber explains the advantage of holding the initial fight pick and vows to place his first fighter into a favorable matchup, calling it a “guaranteed win.”

Two hours later, Team Cruz has the gym, and assistant coaches are drilling the fighters. Much like Faber’s team, Cruz’s men speak highly of their leader -- even Tickle, who had hoped to be picked by Faber.

“Cruz was messing with me because he knew I wanted to be on Faber’s team,” says Tickle, “but being on Cruz’s team, I love it. We’re cool.”

That afternoon, Faber confronts Cruz on something he apparently said in UFC Magazine about him being helped by his parents in the purchase of his gym. Faber warns his foe to stay away from talking about his parents, and Cruz confesses that he meant no offense toward the Faber family.

Faber then makes his first fight pick. Team Cruz’s Vick will lock up with Team Faber’s Cruickshank. The men shake hands and pose for the cameras.

Fast forward to Faber’s next training session, where an emotional Chiesa is pulled from his workout to call his mother. The news is grim. Chiesa’s father has passed away after a fight with cancer. Chiesa embraces Faber and does the same with Sicilia, a friend and training partner, as he deliberates whether to stay on the show. The bearded fighter laments that he cannot see his father just one more time but makes the difficult decision to continue on his quest to become the next “Ultimate Fighter” winner after spending a day with his family.

With only 15 minutes until the live fight, Vick and Cruickshank go through their respective training regimens in preparation for the ensuing battle. Lloyd Irvin works with Vick on his jiu-jitsu game, as Cruz, the UFC bantamweight champion, explains the importance of footwork and movement to his protégé.

Meanwhile, Cruickshank is being schooled in the art of Faber’s famous guillotine choke -- the same he one used to submit Cruz in their first meeting. The training then shifts to submission defense and pad work.

After making weight and receiving last-minute instructions from their coaches, the fighters now oppose each other in the cage. Referee Herb Dean begins the action, and Cruickshank lands a hard side kick followed by a stiff uppercut. Faber’s fighter is moving smoothly, and Vick is struggling to keep up with the versatile striker.

Cruickshank lands a cracking round kick to the ribs and follows with a spinning heel kick that is blocked. Out of nowhere, Cruickshank drives for a double-leg and gets caught with a knee to the jaw that knocks him completely cold at 2:16. Team Cruz erupts, as Dean attends to Faber’s unconscious fighter. Cruz has stolen control from his foe and will choose next week’s matchup.

“[My coaches] were telling me to throw a [right straight-left hook combination] and then a right high kick,” a victorious Vick tells host Jon Anik. “I went for the kick, but I saw him shoot, and I threw it kind of low and hit him with the knee. I meant it to be a kick, but the knee landed, so it’s all good.”

The show closes with Cruz pulling a move straight out of the Cobra Kai dojo. Cruz says Faber may pick his “best guy” to take on Lawrence next week. After no one from Faber’s team volunteers, “The California Kid” lets Cruz make the selection: jiu-jitsu ace Marcello.