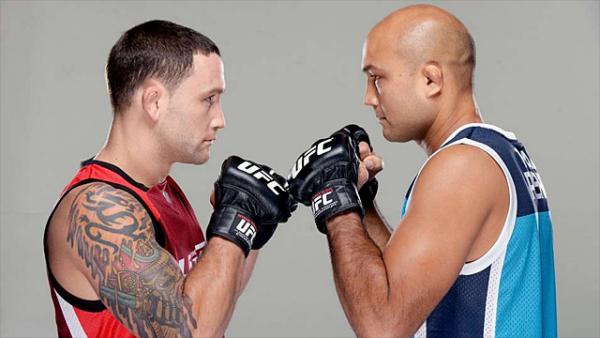 Team Edgar’s Eddie Gordon takes particular exception to how Zapata’s teammates have celebrated the win. Conversely, Team Penn’s Dan Spohn points to the fact that Zapata sustained far less damage than his opponent and believes the verdict to be a fair one.

This week, light heavyweights will be in action, when Team Edgar’s Patrick Walsh collides with Team Penn’s Anton Berzin.

After enduring some good-natured teasing about his “fluffy” physique, Walsh hits the mats with the rest of the red team. Coach Frankie Edgar gives his men a pep talk following Stephens’ difficult defeat, and Walsh reveals that he learned his consistent work ethic from his father, a commercial fisherman in the Boston area. Edgar designs a pressure-heavy game plan for the former college wrestler, who hopes to back up the lanky Berzin and negate his reach advantage.

Berzin has yet to go the distance in any of his fights and feels confident in his ability to finish Walsh. Coach B.J. Penn concurs with the assessment, though he wishes his first overall pick would listen a little more to his coaches.

Back at the fighter house, UFC hall of famer and Team Penn assistant coach Mark Coleman joins the men to watch UFC Fight Night “Belfort vs. Henderson.” As they watch the fights, the men finally release their built up frustrations and argue over last week’s decision. Team Edgar’s Gordon and Matt Van Buren get into it with Team Penn’s Chris Fields and Spohn, though little resolution is reached.

Later, Berzin reveals that he was born in Russia but immigrated with his family to Philadelphia when he was a kid. Coming from a poor home, Berzin says his interactions with more affluent children put a chip on his shoulder from an early age. That chip is still there, says the light heavyweight, who then expresses gratitude for the opportunities he has been given in the United States.

Once both men are in the cage, Walsh bulls forward as expected, though Berzin meets him with double underhooks and then trips him to the mat. Penn’s man jumps on his opponent’s back, though Walsh quickly escapes and dives for another takedown. Berzin stuffs him again and threatens with back control a second time before cracking his foe with a knee to the mug. Walsh walks through the shot and then eats a left hook before snatching a whizzer and sending Berzin flying with high-impact throw. Walsh pounds away with several crisp hammer fists, but Berzin is able to regain his base and score a takedown of his own. Walsh scrambles away once more but eats a pair of stinging jabs for his efforts. Walsh dumps him with a single-leg just before the horn sounds, but Berzin is on his way back up as the round expires.

Walsh connects with a hard right hook to start round two, and the undersized light heavyweight follows it up with a solid left. The men then trade good shots inside, but Walsh hits a high crotch and passes to half guard. Walsh leans on Berzin with shoulder pressure and pops him with short punches to the ribs and head, followed by a pair of cracking elbows. Berzin manages to buck him off and then hop on his back again, briefly threatening with an armbar and a triangle before Walsh escapes and ends up back in Berzin’s half guard to end the frame.

The judges have the fight split at one round apiece, and referee Herb Dean starts the tiebreaker period. Walsh dips his head and locks his hands around Berzin’s waist, slamming him to the canvas with a powerful double-leg. The Team Edgar rep is the fresher man, and he traps an arm and works with punches from half guard. Berzin looks exhausted, and he can do little but survive from the bottom during a four-minute stretch of ground-and-pound. Berzin makes one final effort to explode up, but Walsh shoves him back down easily.

Walsh receives the nod from the judges, and a dejected Berzin heads back to his locker room, apologizing to his teammates and coaches for gassing out. The team score now stands at three wins apiece, and Edgar chooses Gordon to battle Team Penn’s Mike King next week.