Maurice Greene (5-2) starts the show on #TUF28, knocking out Bellator alum Przemysław Mysiala in the first round! A GLORY kickboxer and former LFA title challenger, "The Pirate" stands 6'7" and has finished four of five wins, each in the first round. pic.twitter.com/v5b5BA5yeh

Welcome back to “The Ultimate Fighter,” surging forward into Season 28 and final one shown on Fox television properties. This season of “TUF” was given the appropriate title of “Heavy Hitters,” selecting the heaviest weight classes for both men and women -- heavyweight and women’s featherweight. As for the coaches, TUF 28 pits current middleweight champion and TUF Smashes winner Robert Whittaker against TUF 17 king and top contender Kelvin Gastelum against one another, with the two meeting at a date to be announced.

TUF 28 has no preliminary or qualifying matchups, with nobody needing to fight to get into the house and on the show, and we are presented the 16 members of the show right out of the gate as they line up inside the TUF gym. Both Whittaker and Gastelum walk out smiling, hopefully setting the tone for an amicable coach vs. coach dynamic, and we can see Whittaker sporting a cast on his right wrist.

We begin with the divisions splitting off to go with a coach for evaluations, with Whittaker taking the heavyweights and Gastelum taking the women’s featherweights. They test the competitors in their striking, grappling and other aspects of their skillsets. The coaches switch off after an hour to evaluate the other division, and some of the heavyweights already show signs of fatigue and stress.

After the evaluations, UFC President Dana White introduces himself along with the coaches. He makes sure to let the contenders know that their coaches are both TUF winners, and that they have a very particular set of skills they have acquired over very long careers. Dana flips the coin and after teasing Team Gastelum about their pink side of the coin, Gastelum wins the coin toss and elects to pick the first fight instead of the first fighter in order to control the flow of the season.

With his first pick overall, Robert Whittaker selects Brazilian heavyweight Anderson da Silva, and Gastelum counters by picking Aussie Ben Sosoli. In Whittaker’s first pick for female fighters, he chooses Lithuanian Julija Stoliarenko, and Gastelum responds by selecting American Macy Chiasson. Following those picks, the coaches go down the list and set their teams, stopping midway through to marvel at Polish fighter Przemyslaw Mysiala’s name, who invites us to call him “PM”. Dana gives a shorter, more inspirational version of his infamous “Do You Wanna Be a Fighter” speech from TUF 1, and with the teams set, “TUF Season 28: Heavy Hitters” is underway. 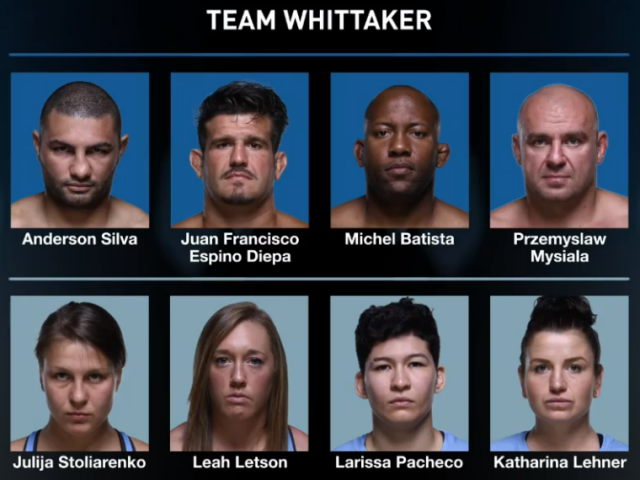 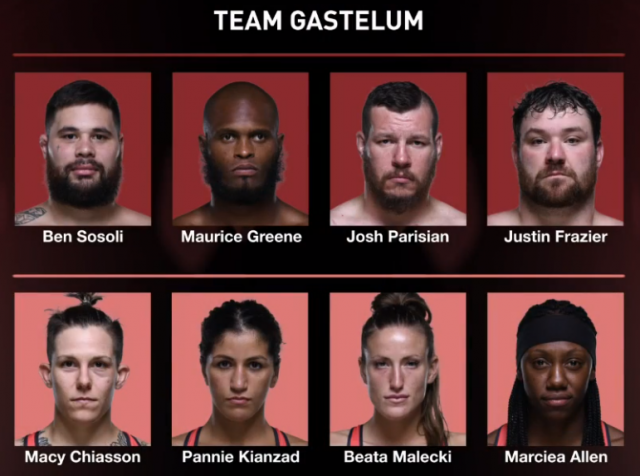 Picking the first fight of the season, Gastelum starts out with the heavyweights. From his team he sends out Greene vs. Team Whittaker’s Mysiala, the latter semi-affectionately referred to as “the guy with the messed up name.”

As excited as kids at Christmas, the competitors burst out of their vans and sprint inside the TUF house, racing to pick their rooms and get a lay of the land. Although the fighters have a little fun in the house, it’s straight to business, and the official training begins.

We start off by meeting Greene, who shares that he was given letters and gifts from his fiancé to open each day with a surprise of love and support from his family, starting off with a sweet pillowcase his daughter made for him. After getting to know his family, his head coach Brock Larson, who competed in the UFC and WEC, and his crocheting expertise, it’s on to his training regimen. Gastelum remarks on the coachability of Greene, and plans on capitalizing on Greene’s significant height and reach advantage over Mysiala. For the first time in his life, Greene will be able to spend all of his time training and improving, and he is confident in his abilities and wants to set the tone for his team.

Mysiala, in his introductory segment, speaks of his troubled past with his family and with drugs, how he recovered and how MMA saved his life. An expat from Poland who now lives in England, he holds a wealth of combat sports experience compared to his opponent, with his entire family training jiu-jitsu together. Well aware of Greene’s natural advantages, Mysiala plans on sticking to his grappling in order to get the job done. It does not take long for a fighter to remark that the bout is a classic “striker vs grappler matchup.”

With the introductions behind us, the first fight on TUF 28 is ready to go. Referee Chris Tognoni oversees the heavyweight clash and they start by immediately clinching against the cage. They break, and Greene throws out a series of long jabs, with Mysiala trying to counter but coming up short. Mysiala shoots for an ill-advised takedown and ends up giving up side control to Greene, who takes half guard, but Mysiala kicks off to get the fight back on its feet. The size difference is significant between the two, and Greene uses straight punches and an especially effective front kick to split the guard of his opponent, knocking him backwards. Greene lands a ferocious knee that staggers Mysiala for a moment, and Greene leaps forward to land another massive knee that topples Mysiala. Unloading a barrage of punches on Mysiala, Greene pours it on but Mysiala is able to fight back to his feet. Once standing again, former Legacy Fighting Alliance title challenger unloads a vicious right uppercut that sends Mysiala crashing to the canvas, forcing Tognoni to call a stop to the fight.

If this fight is any indication of how this season is going to go, we could be in for a wild one. With Team Gastelum emerging victorious, Gastelum picks the next fight, which will take place between women’s featherweights. To represent his team, Gastelum sends out Pannie Kianzad against Team Whittaker’s Katharina Lehner. In the ensuing clips for the remainder of the season, we are treated to some tears, a broken tooth, some drama, and the coaches’ challenge that appears to take its toll on them.