We begin this week not with fight recovery or celebration, but instead with Maurice Greene sitting by himself, self-reflecting with a cigarette. Comfortable that smoking will not detrimentally affect his performance, similar in nature to kickboxer and Bellator MMA fighter Joe Schilling’s view of smoking, he trains harder to overcome the deficit that smoking might cause. Teammate and friend Justin Frazier comes to check on him, and Greene tearfully admits that this competition is much more difficult than he expected it would be.

His coach, Kelvin Gastelum, and other assistant coaches sit down with Greene to discuss his problems, and to help him push through it and also as a form of punishment they assign him several strenuous exercises. They believe in him, and if they can help him push past his demons, Gastelum believes the sky’s the limit for “The Pirate.”

We then move over to Team Whittaker, where Julija Stoliarenko prepares for her semifinal battle this week. Although the ground game is her strength, she cannot just lead with it and feels she needs to mix in striking with grappling to get the job done. Throughout her career, all four of Stoliarenko’s pro wins have come by first-round armbar. Additionally, her one “TUF” bout earlier this season was a first-round armbar of Marciea Allen, and she also celebrates three more armbar finishes -- including two in the first round -- in mixed rules bouts inside the Seiza organization.

Getting away from the “TUF” house or gym for a little while, the coaches take their teams to a water park for a day of fun and frolic. The coaches even have a little fun racing each other on a lengthy water slide. Keeping with the team-building, they then head to a sushi restaurant where they feast. Reminiscent of an infamous scene from the movie “Jackass,” Robert Whittaker encourages Ben Sosoli and Katharina Lehner to eat a wasabi and ginger sandwich. The teams howl in laughter when they do, but Sosoli makes a face that tells the audience “I’ve made a huge mistake.”

Heading back to the other team’s fight prep, Pannie Kianzad constantly drills her armbar defense, knowing that she needs to thwart Stoliarenko’s game plan. Kianzad has the unfortunate distinction of being one of only three fighters (Kaitlin Young and Lynn Alvarez the others) to drop three consecutive bouts in Invicta Fighting Championships in three different ways -- knockout, submission and decision. Despite this, Kianzad is confident she has the ability to keep the fight standing and impose her own game.

Both fighters make weight at 145 pounds without issue. After the weigh-ins, multiple fighters on both teams comment on Stoliarenko’s weakness as a one-dimensional fighter, remarking that it may be her undoing. After a small amount of the usual fight prep, it’s time to throw down!

Overseeing the action in this contest is Jason Herzog, and to quote Mike Goldberg, “We are underway.” The two immediately meet in the center of the Octagon and exchange. Stoliarenko throws a few leg kicks while Kianzad looks to land a strong left hand. Thirty seconds in, Stoliarenko dives forward to try for a takedown and misses, but both fighters back away while trying to find their distance. The two exchange single punches with each scoring, but Kianzad appears to be landing the more meaningful shots. Halfway through the first round, Stoliarenko tries to chain a few punches together to set up a takedown, but Kianzad darts away smoothly. After exchanging some more on the feet, Stoliarenko grabs Kianzad and presses her against the cage, but Kianzad is once again able to break the clinch and land punches. With 10 seconds left, Kianzad lands a crisp one-two to send Stoliarenko back, and the closely contested round comes to an end.

The second frame begins much like the first, with Stoliarenko landing a few low kicks while Kianzad relies on her boxing and counters. Kianzad’s corner repeatedly calls out “Mike Tyson,” which appears to be asking for a big left hook, or could also be more of a general request to throw bombs. In an exchange, Kianzad gets bloodied up as both women blast each other on the feet. Kianzad responds by throwing a left hook that briefly drops Stoliarenko, who recovers and unsuccessfully tries to take Kianzad to the canvas. After stuffing the takedown, Kianzad’s confidence swells as she wins several more striking exchanges, even mixing in a knee or two for good measure. Stoliarenko’s striking starts to get a bit wild as she swings hard, grinning all the time, but Kianzad stays focused and keeps her boxing tight and sharp. To pay her back, Kianzad bloodies Stoliarenko’s face up as well, and the round ends with momentum on the side of Kianzad.

Seeing a final round for the first time this season, a motivated “Banzai” presses forward and lands several more combinations while Stoliarenko tries to fire back and falls short. At this point in the fight, Kianzad is more comfortable to clinch with her opponent, as she throws more knees when they close the distance. Kianzad’s punches are having more of a noticeable effect, as Stoliarenko smiles as Kianzad is picking her apart. Stoliarenko’s coaches call for a takedown, which she goes after and is once again shut down. This time, Kianzad really makes her pay for the attempt with a powerful knee and left hand that make Stoliarenko bounce off the cage wall. Outstruck on the feet, she tries and fails for another takedown, and Kianzad tags her repeatedly with big hooking shots. Undeterred from a veritable crimson mask, Kianzad shows no ill effects from the damage on her face, and the two exchange right to the final bell in a very exciting fight from bell to bell.

Winning the decision on all three scorecards, Kianzad is declared the winner by Ultimate Fighting Championship President Dana White and will move on to the featherweight finale. 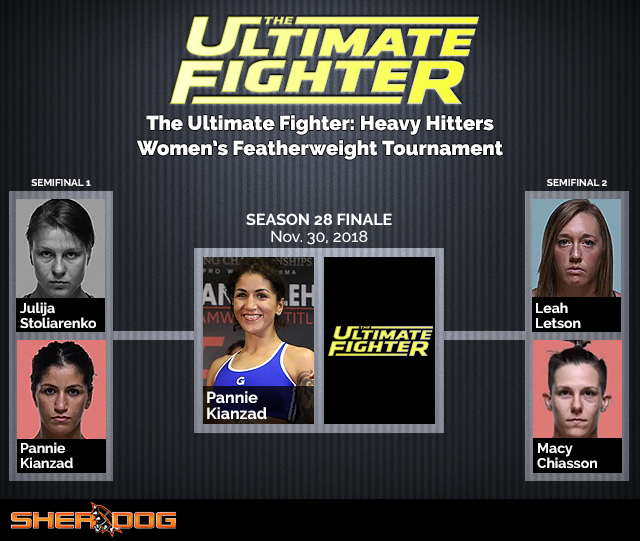 For the first time, we see a coach that appears irritated after their fighter lost, when Whittaker notes that Stoliarenko was not listening to his cornering. Kianzad is elated she won by sticking to her game plan, and her confidence in her skills has never been higher. On the losing end, an undeterred Stoliarenko is thrilled with how the fight went because of how fun it was, even though she lost, because she looks forward to becoming a better fighter from the experience.