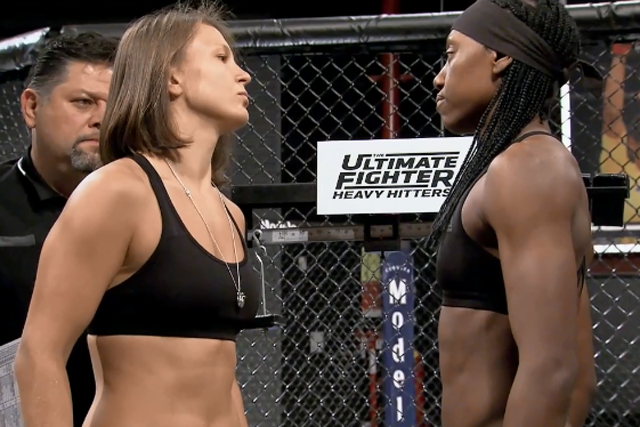 
We’re back with Episode 4 of Season 28 of “The Ultimate Fighter,” and we start right off with Team Whittaker member Julija Stoliarenko’s fight prep. We are immediately treated to Stoliarenko’s admission that in addition to MMA, she also competes in bareknuckle competition, which seems to be a growing trend in combat sports as of late. Despite her striking prowess, she and Whittaker decide that the best course of action is to take the fight to the ground in order to beat her opponent.

Back in the house, Marciea Allen discusses the trials and tribulations she faced coming out in the early 2000s, with a wonderfully supportive family but a community that looked down upon her. We take a trip to Allen’s home, where we meet her former client turned girlfriend Brittney, who is her partner in business and in life. After opening a women’s only fitness facility, she pulled back on the business aspect to go all-in on fighting, knowing she can take no more half measures. Later on, we are treated to a highlight package of Allen’s bouts, including both of her Invicta Fighting Championships appearances in 2012 and 2018.

Kelvin Gastelum brings in his original coaches to help out with his team, who surprisingly award him his black belt in Brazilian jiu-jitsu, and inspire him and the team to defy the odds and follow their dreams.

Team Whittaker, following in their trend of opening up practices by playing games, takes his team out on the water for a workout. Even though it’s only been a few weeks for them inside the house, Whittaker wants to keep shaking things up so training stays fresh and they don’t go crazy doing the same thing over and over again. The fun style of warmups doesn’t rub everyone the right way, and fighters like Leah Letson feel that training needs to be more serious.

With Allen’s coaches fully aware of Julija’s strategy, noting that all of her wins are indeed via first-round armbar, the best bet is to stay away from that. The team drills her armbar defense as much as possible to prepare her for that possibility.

Switching gears to Stoliarenko’s home video, we are treated to her home country of Lithuania. Growing up in a small town, she always had the love and support of her family despite their separation. She used that support to excel in multiple martial arts styles over the years, and proved it by showing off her many medals and accolades she’s received.

The weigh-ins go on without issue, with Stoliarenko hitting 145 pounds and her opponent Allen at 145.5. In one last effort to highlight potential drama, Letson laments her lackluster training and language barrier issues with her team, and a few members of Team Gastelum encourage her to change teams to better suit her training.

After completing all of the standard pre-fight rituals, it’s time for the fight to go down.

Referee Mark Smith oversees the action tonight, and the first round begins. Stoliarenko starts out with a couple kicks, with Allen countering and trying to stay on the outside. Stoliarenko closes the distance and shoots for a takedown but is thwarted, and Allen ends up on top while avoiding upkicks and submission attempts. Allen pummels Stoliarenko with vicious punches and hammerfists to the face, while repeatedly holding on to the fence to rain down blows. Allen pushes out of an armbar setup and bloodies up her opponent with strike after strike. Stoliarenko scrambles to her feet and immediately shoots for another takedown, but this time she gets it, and now the tables have turned.

Immediately jumping into half guard, Stoliarenko drops some punishing shots to her opponent’s midsection. An apparent practitioner of Dundasso, Allen grabs the cage with her toes several more times to maintain position, all while Referee Smith shouts four times for her to get her toes out of the cage. He even slaps her foot once. Once Julija goes through to mount, she immediately sets up an armbar. Allen attempts to kick her away but is unsuccessful, and Stoliarenko gets the tap and wins by first-round armbar.

With Team Whittaker picking up their first win of the season, Whittaker incredulously remarks that Julija pulled guard in an MMA fight and still won it, to which Julija laughs that she does it all the time. Allen is flabbergasted at her loss, but is impressed that Stoliarenko survived long enough to get the submission.

In the next fight, we’re back to the heavyweights, with Gastelum picking his team member Josh Parisian against Team Whittaker’s Michel Batista. While Batista is an outstanding wrestler, Gastelum trusts that Parisian’s well-rounded skillset will give him the edge in an MMA fight.