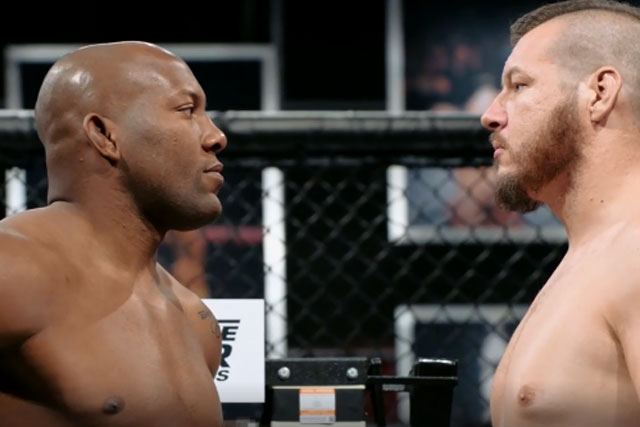 Michel Batista (left) and Josh Parisian do battle on Episode 5.


Season 28’s Episode 5 of “The Ultimate Fighter” begins with Marciea Allen lamenting her loss from last week and recovering from injury. Despite the preparation for her opponent, she was still unable to thwart the armbar, although others praised her for inflicting serious damage on Julija Stoliarenko before getting caught with the submission. On the other side, Stoliarenko celebrates by imbibing three bottles of wine and suffers the unfortunate and somewhat comical effects of inebriation with Pannie Kianzad and Maurice Greene.

With celebrations concluded, we dive into Josh Parisian’s training session, and Gastelum again remarks that his well-roundedness will prove to his advantage. Josh has no illusions of what his opponent plans to do, so his goal is simple: keep the fight standing.

We are next presented footage from Parisian’s bout with Greg Rebello on Dana White’s Tuesday Night Contender Series. Taking the fight on less than one week notice and as a massive underdog, he won by first-round spinning back fist knockout. For his efforts, instead of earning a UFC contract, he was promoted from an alternate on this season of “TUF” to an active member.

In over 4,800 fights throughout UFC history, no fighter weighing over 170 pounds had ever pulled off a spinning back fist knockout. In Bellator MMA, light heavyweight Emanuel Newton scored two spinning back fist knockouts, but no heavyweight in that organization landed one either. The same goes for virtually every other major promotion in the sport’s history. Despite all of that, the 265-pound Parisian landed one in 91 seconds against Rebello at DWTNCS 11 and all he earned was a spot on “The Ultimate Fighter.”

Michel Batista introduces himself in sharp contrast to most of the other fighters we have seen on this season. When he turned 14, he was selected for the Cuban national youth wrestling team, where he was separated from his family for months at a time. After a few years, he joined the adult national team and ended up winning an Olympic bronze medal for Cuba. Reaching his limit for growth in the sport of wrestling, he transitioned to MMA, and in order to reach that potential he left Cuba and moved to Miami. When not training, Batista works security at a club run by other ex-Cuban athletes, but to paraphrase Mauricio Rua, his schedule is simple: trainy, eaty, worky and sleepy.

We shift to Team Gastelum, where Gastelum brings in an extremely motivational strength and conditioning coach, John Walker. The team lauds the workouts, which are exceptionally taxing but very effective. Then, Gastelum rewards his team by visiting the house and bringing them victuals, much to the chagrin of the already-struggling Leah Letson. While Gastelum and his team celebrate together, most of Team Whittaker sulk on the other side of the room with the exception of Letson, who little-by-little is leaning towards changing teams.

In Batista’s training session, it’s no secret that his strategy is to get the fight down to the ground. He feels that he can take advantage of Parisian’s sometimes wild striking to secure takedowns and maybe even go for submissions. Batista explains that he competed against current champ-champ Daniel Cormier twice in wrestling, and they split wins and losses against one another; he hopes to fight Cormier one day in MMA. Despite professing his strengths, he openly admits his striking is not that great and attempts to shore it up.

We then shift to meet Parisian’s family, which consists of his girlfriend and his three dogs, including two English bulldogs and a St. Bernard that with a few months’ training could compete at lightweight. A former office worker at an in IT company, Parisian quit his job to train full-time. With his team in Michigan consisting of supportive teammates like UFC strawweight Amanda Bobby Cooper, Parisian is motivated to not only win this season of “TUF,” but also become the next heavyweight champion.

On the scales, both fighters make weight with several pounds to spare. After getting some quick pre-fight traditions out of the way, it’s time to throw down.

Referee Mark Smith is the third man inside the Octagon, and we’re ready to go. In only a few seconds, we know that Batista is planning on doing what he does best and “embrace the grind” over his opponent. Putting his foe on the canvas just nine seconds into the bout, Batista applies an immense amount of pressure on Parisian, who scrambles back to his feet. Pressing him against the cage, Batista maintains underhooks and gets him back down again. Up against the fence, Parisian repeatedly throws a few Travis Browne-esque elbows to the side of Batista’s head, to no effect. This repeats a few more times, until Batista gets him down for the fifth time and takes side control. After throwing some heavy punches while his prey walks his way up against the cage, Parisian is finally showing some damage with a bit of blood flowing. With 30 seconds left, Batista takes his back and tries to sink in a rear-naked choke. Unable to coax the tap, Parisian barely rides out the position until the round ends. After landing six takedowns in that first round, some heavy ground-and-pound as well as a submission attempt, that’s a possible 10-8 round for Batista.

Round 2 starts off just like the first, only it took eight seconds to get him down instead of nine. This time, Parisian is unable to stand back up for over a minute and eats furious punches and a few nasty knees to the body while trying to get up, only to get dragged back down again. Finally back to his feet, Batista goes for a high-amplitude slam and you hear an audible groan from Parisian. This is the straw that broke the camel’s back, as Batista rains down punches forcing Parisian to turtle up, and Referee Smith calls a stop to the contest. After completely neutralizing his opponent, Batista prevails by second-round TKO.

Ever the stoic fighter, Batista calmly explains to the camera that he never once felt in danger and that he was in control the entire fight, and it’s hard to argue with him. Meanwhile, a bloodied and bruised loser is dismayed, but remains confident that he can use this defeat as an opportunity to learn and better himself.

For the next pick, to represent his team, the team picks featherweight Bea Malecki against Whittaker’s Leah Letson. Gastelum expresses his excitement for the matchup, especially with Bea’s muay Thai skills and Whittaker states that Letson should be able to control this fight and even the score for Team Whittaker at three wins each.