Though it seemed like it may have been an appealing matchup forever resigned to the realm of "What If?", featherweight banger Hiroyuki Takaya will get his crack at Cub Swanson come December.

Takaya and Swanson were originally scheduled to meet in an undercard affair on WEC's title tripleheader card on Aug. 3 before a broken hand forced Swanson out of the bout. WEC officials attempted to salvage the bout by seeking out Miletich product LC Davis as a replacement, but Takaya's management denied the last-minute opponent change.

Sources close to the "Streetfight Bancho" have confirmed to Sherdog.com that the 145-pound punch-up between Takaya and Swanson has now been rescheduled for the promotion's next card on Dec. 3 at the Hard Rock Hotel & Casino in Las Vegas.

The bout will mark Takaya's first action since his promotional debut in February. A star signing for Zuffa's development of the sub-lightweight class in the WEC, the hype accompanying Takaya after his thrilling win last November over Antonio Carvalho failed to translate to results in his stateside debut, as he was knocked out by the surging Leonard Garcia in only 91 seconds.

The upstart Swanson suffered the second loss of his career last December when he took a step up in competition to take on Jens Pulver in the former UFC lightweight champion's return to the featherweight division. Since being submitted by "Lil Evil" in only 35 seconds, Swanson notched an easy tune-up victory this past February, submitting Donnie Walker at an International Fighting & Boxing League event.

Although Deep's next major card will come Dec. 10 with its 39 Impact bill at Korakuen Hall in Tokyo, the ever-active promotion is already laying the groundwork for a card with possibly bigger implications less than two weeks after.

In what may become an annual holiday festivity, Deep has announced that it will hold the second edition of Protect Impact on Dec. 22. The event is on the exact same date as the first hook-up between Deep and sponsoring company Protect was last year, although this year's installment will be at Shinjuku Face in Tokyo instead of in Osaka, where it was staged last year. 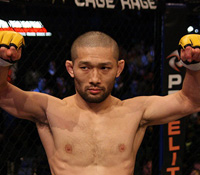 Jim Page/Sherdog.com
Deep Protect Impact will
find a challenger for
Masakazu Imanari.
There will still be an Osakan flavor, however, as Deep featherweight champion Dokonjonosuke Mishima, one of Kansai's favorite fighting sons, will see non-title action against the tough but unheralded Toshiaki Kitada. The match will be Mishima's first since dropping to the featherweight class and defeating then-divisional champion Masakazu Imanari in May.

Speaking of Imanari, MMA's foremost foot-cranking fetishist will also play a role in the card, although he won't be lacing up his gloves.

Imanari dropped a weight class and became Deep's first bantamweight champion in August with a 29-second heelhooking of Hiroshi Umemura. However, without any clear challengers to his crown, Dec. 22's Protect Impact card will introduce the opening round of Deep's bantamweight eliminator tournament, to determine the first man to meet Imanari in his inaugural title defense.

The eight-man tournament field will feature Tomohiko Hori, Isao Terada, Tomoya Miyashita, Seiji Akao, Ippo Watanuki, Toru Harai, and Tatsumitsu Wada. The eighth entrant will be chosen by ZST as an official representative of the promotion, continuing the recent working relationship between the Rings offshoot and Deep.

As has been Deep's recent custom, the tournament bouts will be decided via in-ring lottery on the night of the event, as was employed for its middleweight championship tournament and novelty Megaton tournament earlier this year. The semifinals and finals of the tournament will take place on the same night on a yet-to-be-scheduled Deep card in early 2009.

If its initial card line-up didn't catch your eye, Jewels has acquired some certain sparkle to turn your head.

Both Fujii, and her understudy Akano, will be fighting at catch-weights above their usual fight weights. Fujii, typically a 115-pounder, will meet Morii at a 128-pound catch-weight, while Akano, who typically fights between 128 and 135 pounds, meets Hari at 145 pounds.

"With the postponement of Smackgirl and my fight in July, and the subsequent happenings in the female MMA world, I'm very thankful for an event like this to come along and am filled with a sense of gratitude," said Akano. "Since there are really strong foreign fighters in my weight class, someday, I want to fight foreigners. I want to be able to compete overseas, and one day become the best in my weight class. I think I'd like to fight Gina Carano, and one girl I lost to in the past, Tara Larosa."

Fujii, owner of a flawless 15-0 mark in MMA, is expected to succinctly add Morii to her highlight reel. However, because of Jewels' association with Deep, the hope for all promotional parties concerned is that they can build toward a clash of pound-for-pound quality females between Fujii and Deep 106-pound queen Miku Matsumoto.

"I've known Miku since she started in MMA, and she's gotten stronger and stronger since then, to the point that I truly think she's a champion," said Fujii. "I think she feels the same way about MMA as I do, so I think there will come a time in the future where we'll need to fight. She feels like my little sister, so I don't really want to fight her, but if the time comes, it will be exciting." 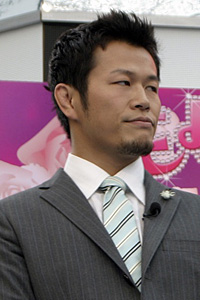 His post-MMA life has prized the pen over the sword, but Genki Sudo is about to put his creative energy to use on the mat again -- though in a brand new way.

Sudo's alma mater, Takushoku University, revealed late last week that the charismatic "Neo-Samurai" will take over the reigns of their acclaimed wrestling program as head coach. Takushoku had been looking for potential coaching candidates within their alumni over the last two months following the passing of former coach and Diet parliamentary representative Kotaro Akimoto, who died on Aug. 22 after suffering a stroke.

Sudo was named the choice on Nov. 5, and will officially be announced as the team's wrestling coach on Nov. 13 at a press conference where he'll meet with the media.

At Takushoku, Sudo was an All-Japan collegiate Greco-Roman wrestling champion, and went on to an MMA career that saw him become one of Japanese's biggest combat sports superstars. Sudo retired after his New Year's Eve 2006 submission win over Damacio Page, infamously citing a message above a urinal that beckoned him to take "one step forward.” He has since focused his efforts on writing, music and even starting an amateur baseball team. Ironically, Sudo's retirement in part was influenced by lingering neck injuries sustained during his collegiate wrestling career.

Never one for a dull quote, Sudo said that he hopes to bring the sort of "change" to Takushoku's wrestling program that United States president-elect Barack Obama has preached for America.

The fight industry is a copycat business and Japan's combat sports sphere is always a shining example. In a culture dictated by fads and trends, Japan's MMA scene has a new boom: hooliganism.

With a string of new promotions emerging in the Japanese MMA market, last Friday marked the introduction of yet another, albeit of a different mold, as the I&C Agency and Central Martial Arts Association (CMA) unveiled "Grachan.”

The new promotion, which will stage its first event at Differ Ariake in Tokyo on Dec. 14, is one of curious design. Grachan will largely focus on young, inexperienced or up-and-coming talent, be one of the few promotions in Japan to use a cage, and plan to make use of live MCs and DJs during fights. However, most notably, a major selling point of the brand is that they explicitly plan on utilizing gang members, local toughs, delinquents and other questionable characters on their cards.

This is promotional tactic a direct result of the recent cult popularity enjoyed by MMA pioneer Akira Maeda's The Outsider project. Maeda, a shoot-style pro-wrestling legend and founder of the landmark Rings Fighting Network, cut his ties with parent company Fighting and Entertainment Group due to FEG's restructuring of their MMA product and creation of Dream. Maeda had worked as a director with the company's Hero's brand.

Working once again as an independent promoter, Maeda created his new project, The Outsider, in March. While originally intended to be a platform for novice fighters, The Outsider has quickly gained a reputation amongst hardcore Japanese MMA fans for their wild events featuring 20-plus fights per card, many of which feature tattoo-covered hoods and ruffians, whose entourages and gangs fill the venue.

"Originally, as I'm involved in the combat sports business, I got to knowing a lot of mischievous people from way back," said I&C Agency executive Hiroyuki Iwasaki. "When I saw Maeda's The Outsider, I felt I knew some strong delinquents myself and wanted to give them the opportunity to fight, so I got to planning this event. The title 'Grachan' has many meanings, but originally, the idea was of these delinquents aiming for the peak of New Year's Eve."

'Grachan' is a transliterated portmanteau of the phrase "Grand Champion,” which is often used in motor sports, which are associated with Japanese street gang culture.

Also formative for the promotion is its affiliation with the CMA, a network of gyms both in Japan and South Korea. The CMA's strong affiliation with Deep has helped develop the Japanese promotion's reputation as fostering South Korean talent and putting them on the international MMA stage.

It would have seemed that Pancrase, having crowned two new champions in Ryo Kawamura and Marlon Sandro in October, would have been content to crown one more before 2008 ended. Instead, the Dec. 7 installment of the 2008 Shining Tour at Differ Ariake in Tokyo will feature not one, but two King of Pancrase title affairs.

Since turning pro in May 2007, the 20-year-old Kawahara has ran roughshod over his first six opponents, stopping all but one of them in the first round. The promotion's most coveted prospect since poster boy Yoshiro Maeda burst onto the scene in 2003, Kawahara stopped former Shooto world title challenger Kentaro Imaizumi on cuts in his last outing in August.

Inoue, who turned 30 earlier this month, has lost four of his last five bouts, but will be making his bantamweight debut against Kawahara after spending his entire career as a featherweight.