No, there was not any fruit-themed lewdness at his after-party, at least not that we know of. However, astronomers have recently discovered that in dust clouds at the center of our galaxy, there are quantities of a molecule called ethyl formate, an interesting ester that both contributes to the taste of raspberries and smells of rum.

With his second win over Urijah Faber on Sunday, Brown is now the first great 145-pounder in modern MMA -- the center of the featherweight galaxy. Therefore, it's very likely he's tart to the taste, smells like debauchery.

Declaring Mike Thomas Brown the first proper barycenter of the featherweights may strike some longtime ardent fans as odd or inappropriate. After all, the featherweight division may be newly en vogue, but it's hardly "new," as the world of pro Shooto has had competitors in the division's weight range for 20 years. Better still, former Shooto world champion Alexandre Franca "Pequeno" Nogueira reigned for seven years over the division. Surely that sort of longevity constitutes being the nexus of a division.

Well, almost. There can be no doubt that from 1999 to 2006, the featherweight division belonged to Nogueira and his trusty guillotine. However, Nogueira was essentially a killer whale in a kiddie pool.

For at least half of his reign, the featherweight division virtually existed only within pro Shooto, meaning that he was the best fighter of about two dozen total in his weight class, beating the likes of Tetsuo Katsuta and Stephen Palling. From about 2004 onward -- when opportunities began to crop up for featherweights globally and the division began to broaden -- he fought sparsely, and against none of the top emergent talents, until his smashing last year at the hands of supernova Jose Aldo.

Beating your best contemporaries is always the measuring stick for prizefighting, but there does need to be some sort of baseline of quality established. It's the same reason it's asinine to compare the accomplishments of Royce Gracie and Fedor Emelianenko. As soon as featherweight became a legitimate, serious division, "Pequeno" was done. Though I'm sure his knee troubles didn't help, his losses to Hideo Tokoro and Jose Aldo affirmed that he was no world-beater. It's little wonder he so cravenly ducked Gilbert Melendez three years ago. 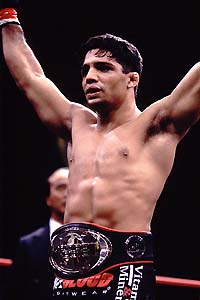 File Photo
"Pequeno" owned the 145-pound
division from 1999 to 2006.
The featherweight division is now a full-fledged galaxy, with global giants rather than regionalized dwarves, replete with luminosity and magnitude (how much longer can I milk the astronomy angle?). In this modern division, Brown is the first fighter to truly reign over other great fighters to any extent.

As the weight class began to expand some five years ago, it was Faber who was seen as its star. However, despite the fact that Faber is undeniably an elite fighter, his resume is built more on quantity rather than quality. His best wins over fighters who had achieved within the 145-pound division are Jeff Curran, Jens Pulver and Ivan Menjivar. Conversely, Brown has beaten four straight top-10 opponents, including Curran and Faber himself twice. This is why he is the first modern featherweight to catch a whiff of frou frou-smelling greatness.

This is not to say that Brown is unbeatable, or that his road ahead is without challenge. In fact, with the likes of Jose Aldo and Wagnney Fabiano on deck, that's anything but the case.

Brown has already objectively accomplished more than any 145-pounder to date, though, which warrants praise. Whether or not he exhibits an Emelianenko-inspired brand of dominance at this point isn't as important as the fact that his wins have made him the nucleus of an expanding, intensifying, exciting division. His wins have established a standard for the 145-pound elite; fighting Brown now means that unequivocally, the featherweight mantle is at stake between him and his opponent.

Let's say Aldo smashes Brown into a state more akin to anaphylaxis than unconsciousness, a la Cub Swanson. Then there can be no argument that he beat a placeholder in a spurious division, like Tetsuo Katsuta and Hiroyuki Abe upsetting Pequeno Nogueira. Simply, if Aldo beats Brown, he beat an objectively outstanding featherweight fighter -- a development years in the making. And of course, if Brown wins, make it five top-10 fighters in a row, as he'll taste even fruitier and smell even more like a pirate.

An outstanding nucleus in a division deeply informs how we all perceive that weight class and its fighters. MMA's divisions with the richest histories -- heavyweight, light heavyweight and welterweight -- are those that developed early icons. You could argue this was because these divisions are the longest tenured, as the SEG-era UFC had weight classes at heavyweight, 200 and 170 pounds. However, the Unified Rules were codified in 2000 and created divisions at 185 and 155 pounds. It wasn't until Takanori Gomi's brilliant 2004 campaign that fans were really galvanized by the lightweight division, which has now become arguably the sport's deepest and most exciting and is unanimously recognized as such. The middleweight division largely remained a black sheep division until Anderson Silva's '06 thrashing of Rich Franklin and subsequent dominance.

These fighters are the prisms by which we interpret the sport. We're more engaged by the light heavyweights as a whole now because we wonder who can beat Lyoto Machida. We maintain a love-hate relationship with the heavyweight division because of the greatness of Fedor Emelianenko. In the wake of Brown's second win over Faber, this is the first time in my nearly 10 years of following MMA that I have seen collective discourse about the next featherweight superfight. Forum flamewars have already begun over Aldo-Brown, as my inbox fills up with polarized opinions over the potential bout. When Dream and Sengoku conclude their featherweight tournaments in the months to come, the ultimate question now is whether the victors can beat Mike Thomas Brown or not.

I feel like this is how prizefighting was meant to be: a champion, his challengers and the rest of us vehemently arguing about them. The results now mean something because a standard for the weight class has been set. It's a beautiful, long overdue development for the 145-pound division. Now, in the heart of the featherweight galaxy, there's the unmistakable sweetness of raspberry, and it smells intoxicating -- just like it's supposed to.