On Thursday, Bellator MMA’s most dominant champion will attempt to defend her belt for a record fifth straight time.

Ilima-Lei Macfarlane (11-0), the only champ in the history of the Bellator women’s flyweight division, faces the 10-0 Juliana Velasquez this week at Bellator 254. The “Ilimanator” currently sits in a three-way tie with Patricio Freire and Ben Askren for the most consecutive title defenses in the history of the promotion, with a chance to move into sole possession of first place. In the undefeated Brazilian, Macfarlane faces, on paper at least, her stiffest challenge thus far. Two days out from fight night, Macfarlane is actually the betting underdog, despite the completely one-sided nature of her first four title defenses. For her part, Velasquez has cut an impressive swath through the division in winning her first five fights in the Bellator cage.

Here is the three-year history of the Bellator women’s flyweight title and the times it has been won, lost or defended. It tells the story of a division that has thus far been absolutely ruled by one exceptional woman, even if the pack is beginning to show signs of catching up. 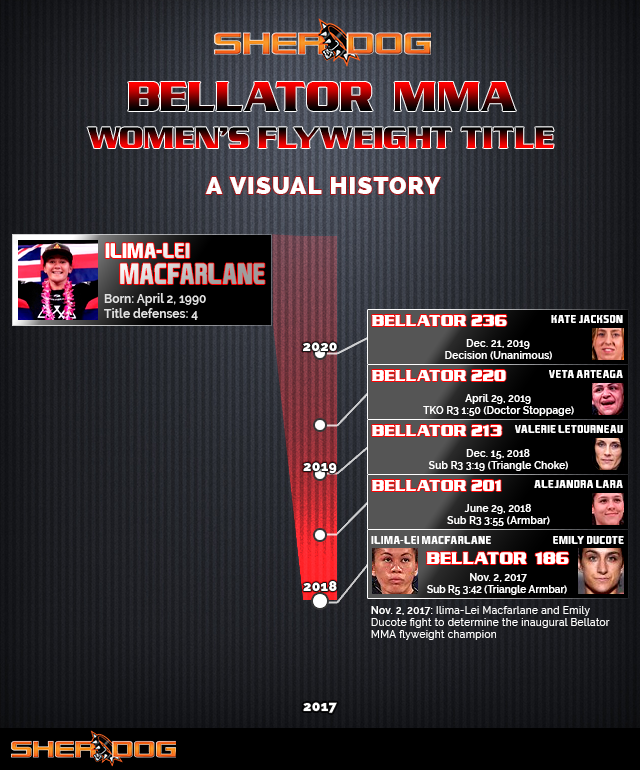