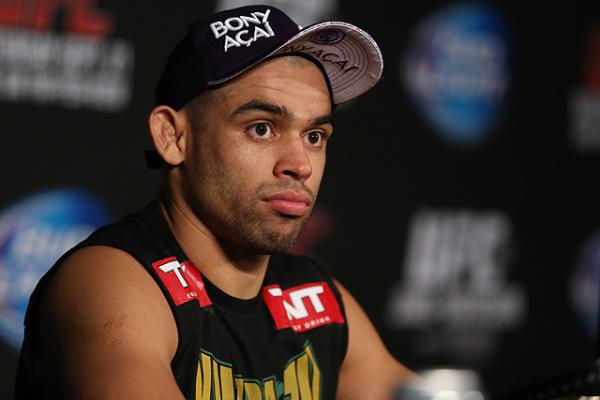 Just as modern mixed martial arts is inextricably linked to Brazil, there is no separating South America’s great fighting nation from its fondness for nicknames.

Nicknames are widespread in Brazilian culture and sports, particularly for footballers, as anyone who watched this year’s World Cup can attest. (I saw every game Brazil played and still don’t know the real names of Hulk or Kaka.) It’s been called “part of a broader cultural penchant for keeping things casual.” The need for a shorter handle is even more understandable when you consider that Brazil employs the Portuguese naming system, which consists of at least four names: two given names, followed by the family names of both parents.

There’s nothing inherently wrong with nicknames. They can be cute or informative; sometimes they’re just easier than saying a fighter’s full name. But when it comes to MMA record-keeping, they can be a real pain in the ass.

After the last installment of “The FF-Files,” a reader inquired about our reasoning for listing (or not listing) Brazilians by their nicknames in the Fight Finder, specifically regarding former UFC bantamweight champ Renan Barao and ex-Pride heavyweight Zuluzinho. The short answer is that we don’t have an ironclad rule, and these things are often decided on a case-by-case basis. The longer answer is more convoluted and requires a little explanation of how the Sherdog back-end operates.

When a contributor files a piece of writing, the article gets edited for copy and then dropped into the content management system (CMS), which scans the item for fighter names and codes it with those handy orange hyperlinks that you see on everything Sherdog publishes. When the CMS goes searching for fighter IDs, it’s looking for full, real names, as they’re listed in the Fight Finder. Nicknames aren’t taken into account, and that’s usually not a problem -- until someone like Renan Barao wins a major title.

For a long time, Barao -- Portuguese for “Baron” -- was listed in the Fight Finder by his full name, Renan do Nascimento Mota Pegado. Any time a writer wanted to reference him, they would have to include all four names in order for the CMS to catch on. Proper or not, a lengthy name can really disrupt the flow of a sentence, so, like many MMA sites, we would often reduce it to “Renan ‘Barao’ Pegado” after the fact. At a certain point, it simply became impractical to write out “Renan do Nascimento Mota Pegado,” a name by which virtually no one refers to him, least of all his employer. The decision was made to go with the name everyone knows, and that’s why you see “Renan Barao” in the Fight Finder today.

(“What about Rony Jason?” you might ask. “That’s what the UFC always calls him.” And you’d be 100-percent correct, but I cannot in good conscience bring myself to change a guy’s last name to the first name of an ’80s slasher flick killer. It’s like calling someone “Steve Chucky.”)

The situation is different for single-name fighters like Zuluzinho. As I mentioned last time out, the FF requires both a first and last name for every profile, so if we were to go with Wagner da Conceicao Martins’ better-known nickname, he would have to be listed as “Zuluzinho Zuluzinho.” Not only would that look silly -- and that’s the fault of our old-timey database, not the big man -- it would also be unnecessary for Sherdog CMS purposes, since he’s no longer an active fighter or someone often referenced in articles. Once Renan Barao is a few years removed from the sport, I might argue for the reinstallation of his full name, too. On the flip side, if he just went by “Barao,” we’d probably still have his full name listed.

All editorial concerns aside, I always prefer to list a fighter’s real name on his or her profile, with the nickname underneath in quotes. I crave structure, and this makes sense to me. If you see a fighter with a name like Allan Popeye or Rafael Negao, it’s only because that’s the information we’ve been presented with. Promoters in Brazil can be imprecise with names, to put it mildly, so the more information we can collect, the better.
SHARE ON FACEBOOK SHARE ON TWITTER
« Previous The FF-Files: The Mystery of That Guy Next The FF-Files: August Oddities »
More
Latest News
+ VIEW MORE