When we say that we receive ludicrous submissions, we are not simply blowing smoke. The lion’s share of fight cards we receive are on the up-and-up, but every now and then, an underhanded “promoter” or gym owner runs a fight card that should not be cleared by anyone. Whether the rules are modified to allow or prohibit certain moves, or they appear to be unsanctioned fights that look more like sparring matches, they won’t sneak in to the Sherdog Fight Finder database unchallenged.

Organizations need to maintain a certain standard for an event to be registered at all, such as medical staff, timekeepers and impartial judges keeping score. These rules are not unwritten, as most commissions and federations list them in order to license the events to take place at all. It is the unlicensed ones that typically cause issues.

Teams can and do arrange events to bolster their fighters by providing advantageous matchups. These arrangements are not illegal, but they do illustrate the fine line between favorable matchmaking and something more problematic. For financial reasons or even to serve as a pipeline to develop prospects quickly and on the cheap, some teams put on shows that do not pass the eye test. These “gym smokers,” as they are referred to in combat sports, are sent in at times to Fight Finder, in hopes of adding experience to a fighter’s pro record where it does not belong. 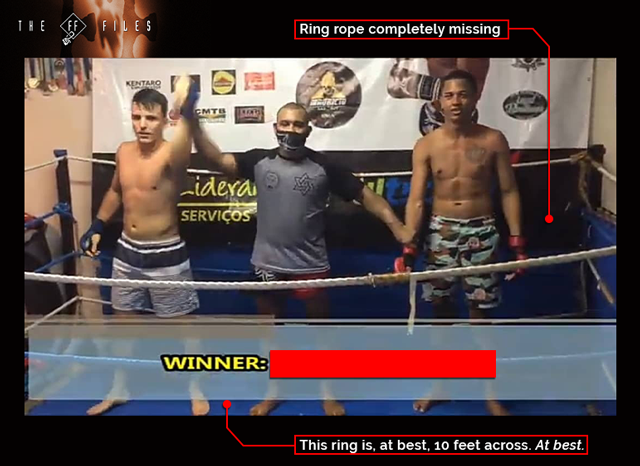 
Some gyms run events, as we have mentioned, and if they are cleared through the proper sanctioning body and rise to the level of a legitimate event, they can be registered like any other MMA card. While there are many that do, there are others not so successful, for example with the image above. This bout, which took place on a figurative postage stamp, with ropes barely holding on as duct tape binds it all together, is not one that should be registered in the database.

This is not to pass judgment, financially or professionally, on the condition of the gym itself. However, it just cannot be along the same vein as professional MMA when two fighters “fight” at 20 percent for 45 seconds, and after a lull in the action, one grabs their shoulder out of nowhere and quits, awarding the undefeated prospect a win. To credit those performances would be like Rickson Gracie actually sporting a 400-0 record on his Sherdog Fight Finder page, or authenticating Helio Gracie’s one-million match claim based on the same criteria. The image speaks for itself. 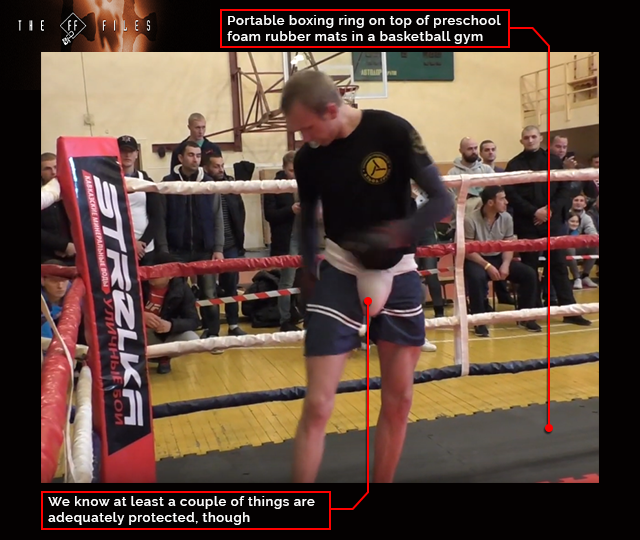 
Hard sparring matches in gyms are not MMA bouts. Street fights are also not MMA bouts. There are certain standards that any event has to meet in order to be registered in the Fight Finder database. Much like U.S. Supreme Court Justice Potter Stewart said when referring to the legal definition of obscenity, we know a gym smoker when we see it. This isn’t some superiority complex, but rather our way of weeding out legitimate matches from those that are less than genuine. We know in the COVID-19 era that events have to be scaled back significantly, and that venues may shift to something much smaller, like a gym. Titan Fighting Championships has held multiple legitimate shows in the MMA Masters gym in Miami, for example.

Like the fighting area – a cage or ring enclosure is practically a must in 2021 and beyond – fighting attire also can call into question the validity of a match. It is little question that a fighter looking like the Slavic version of “Quailman” will not be considered in the same threshold as that of a pro fighter. Are you surprised that Captain Underpants lost badly to an opponent that outgunned and outweighed him by a significant amount?

Seen above is a screenshot from a video sent in, with the submitter claiming that his pro fighter gained a win in this gymnasium against that guy, with the bout taking place in a ring on top of interlocking exercise mats and nothing more beneath it besides a basketball court floor. Manny Reyes Jr. may disagree with this, but not everything listed as MMA is indeed MMA. When these types of results come in, they will not likely be added to Fight Finder; in the event that these were, they would be marked as exhibitions and no more. 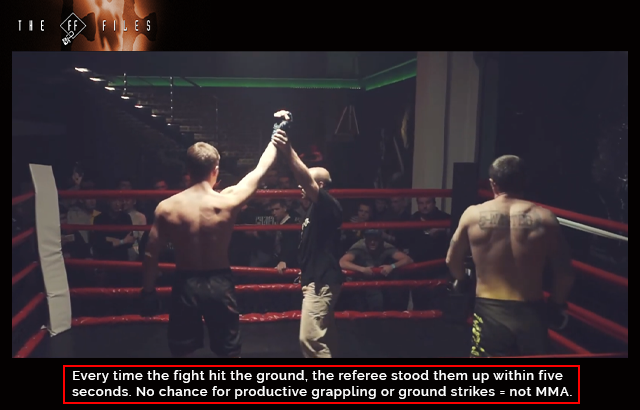 
We half-expected this video to end with the annoyed club owner walking down the stairs, only to be grabbed by the winning fighter, who gives his best “You don’t know where I’ve been, Lou” impression to allow them to keep fighting down there. Unsanctioned, underground fight leagues were all the rage several years back, and they have not slowed down in popularity. Fight cards have started cropping up more in restaurants – meaning, either in the corner or in the center of the establishment, there is a cage that stages live fights over the weekend between two guys that want to slug it out. Some competitors have cruised through opposition this way to try to bolster their records. When these hastily made events pop up, it is up to the staff to determine whether these events were genuine or manipulated.

One way that the team can break through this is to determine the official ruleset of the evening. These organizers, who want their matches to be part of public record so that they can draw attention for future events, often are vocal about how they run their cards. This can be positive, because the team can acquire the information we seek without asking a dozen times over the course of two months. Unfortunately, many of these promoters change the rules to what they think will make for more exciting events to draw crowds.

Put simply, you can’t make up your own rules, run an event, and call it good. Limiting rules, forcing automatic referee standups after seconds of ground control, or disallowing elbows and kicks and knees won’t fly when it comes to legitimate professional MMA bouts. The Unified Rules of Mixed Martial Arts are not strictly binding to all international competition, but there are certain minimum requirements needed for most pro bouts. If a fighter climbs into mount, starts raining down blows, and is stood up because of the hard cap of ground time, that is not MMA in the record book sense. If you need that, switch to muay Thai, lethwei, kickboxing or any number of other combat sports that are striking only. Those matches just won’t wind up in our database.