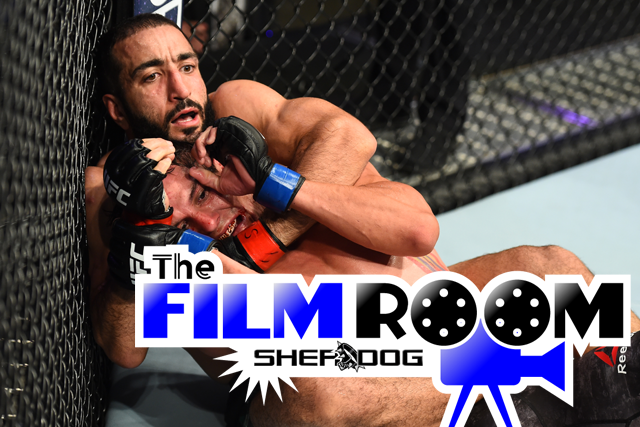 You can sign up for a free seven-day trial of ESPN+ right here, and you can then stream UFC on ESPN+ 1 live on your computer, phone, tablet or streaming device via the ESPN app.

Belal Muhammad will be back inside the Octagon for the first time in more than six months when he tackles welterweight upstart Geoff Neal at UFC Fight Night 143 on Saturday at the Barclays Center in Brooklyn, New York. Muhammad has compiled a 5-2 record since he joined the Ultimate Fighting Championship in 2016, and a win over Neal would extend his run of consecutive victories to five.

Muhammad’s exploits make up this edition of The Film Room.

Training out of Roufusport in Milwaukee, Muhammad is predominantly a striker and possess an interesting skill set on the feet. He generally likes to stay light on his feet and burst forward with a quick combo, usually a rear straight-lead hook-rear straight, before resetting at a safe distance and doing it all over again. What makes Muhammad’s striking so interesting is how he seems to overhaul his style based on the opponent. Oftentimes, he will plod forward with feints and jabs to back the opponent to the cage, where he can unload with combos; at other times, he stays light on his feet while constantly circling the opponent and looking for dominant angles.

Something to watch for with Muhammad is how he always works behind his jab and uses it in a variety of ways. Outside of using it to set up combos, Muhammad likes to counter with his jab while taking an angle to stifle the opponent’s attacks and regain center control. He also likes to double up on the punch to set up the right hand and back the opponent to the fence.

In fact, most of Muhammad’s striking is done with his lead hand and lead leg. He does not throw many head kicks, but when he does, it is usually a lead leg pendulum kick setup by a jab. When staying patient on the outside, Muhammad prefers to feint and jab his way into a lead hook to slowly pick apart his opponent. Something to notice about his approach is how he often feints a jab while taking an angle to his left to set up the lead hook. Since Muhammad relies on the same techniques repeatedly, he can become predictable; the right striker could easily exploit these tendencies.

Something else Muhammad does that adds to his predictability is feinting low before coming back with strikes to the head. Generally, this is a great technique to mix up your attacks and keep the opponent guessing, but Muhammad does it habitually, so it is easy to see coming.

Muhammad prefers a striking match, but we have seen him win close fights with his grappling. He usually shoots for takedowns late in rounds to seal a victory, and he has shown the ability to take an opponent’s back with ease. Despite taking the opponent’s back in nearly every one of his UFC fights, he oddly does not have a single rear-naked choke submission on his resume -- or any submission wins for that matter. However, he holds the rank of purple belt in Brazilian jiu-jitsu under Dan Wanderley, who has also coached Anthony Pettis, Sergio Pettis, Tyron Woodley and Ben Askren.