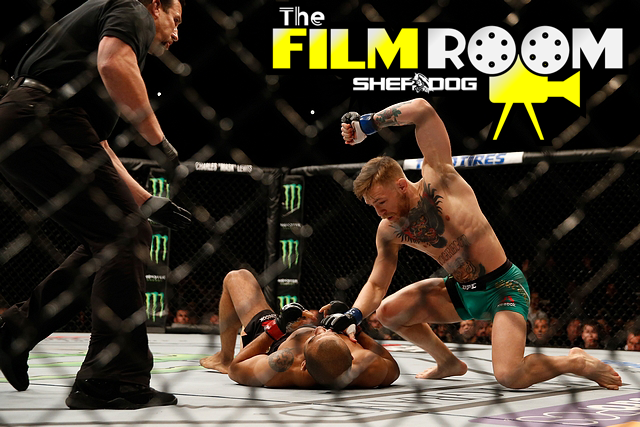 Conor McGregor’s long-awaited return to mixed martial arts is upon us as he takes on Khabib Nurmagomedov for the lightweight title in the main event of UFC 229.

The Ins and Outs of ‘Mystic Mac’


The term “once in a lifetime” gets thrown around often and is usually undeserved, but McGregor truly is a once in a lifetime type of athlete. From elite technique and skill to the charisma of Frank Sinatra and the ability to sell a fight like Muhammad Ali, McGregor has everything someone in the fight game could ask for and more. But McGregor will need more than charisma and trash talk to beat one of the greatest grapplers in the history of this great sport.

By this point in his career, most fans should know what McGregor does well and what he historically struggles with. If you have seen even one fight of McGregor’s you know he’s always looking for his lead-left straight and every aspect of his game revolves around setting up the left hand. When working on the lead, McGregor generally likes to pressure opponents to the cage and set up the left hand with a series of jabs, feints and front kicks to the body to manipulate the opponent’s rhythm and timing and to dictate the range of the fight. Many think of Conor as power puncher due to his 18 KOs, but that’s not exactly the case. His knockouts come from the timing and precision of his punches and not freakish power like a Mark Hunt or Dan Henderson, who can knock opponents silly with sloppy strikes. It is still unknown what causes freakish knockout power, but what we do know is there is no defense for a perfectly timed and placed strike no matter who you are or the athletic abilities you possess. It also helps that he spent most of his career fighting smaller guys, but his fights with Nate Diaz and Eddie Alvarez proved his power translates to the higher weights.

McGregor’s leading attacks have worked wonders, but his real money punch is the retreating counter left straight. As a counter striker, McGregor must make opponents overcommit and fall short with their strikes, which is no easy task at the highest levels of the sport. To force opponents to come forward, McGregor will cut the cage off from his opponents and look for long left hands and front kicks to the body until they are flustered. This is the same setup McGregor has used his entire career and is responsible for ending Jose Aldo’s 10-year undefeated streak.

As mentioned earlier, everything about McGregor’s game is to set up off the left hand, including his kicks. Outside of the front kick to the body, McGregor’s go-to is a spinning back kicks towards his right side. He uses this spin kick to the right side to trick opponents into circling towards his left hand in fear of eating a heel to the face. He also does this since his long, bladed stance makes lead hooks much harder to land. Since McGregor is rather one dimensional in his striking and opponents know he is mainly looking for the left straight, he must use little tricks like this to get opponent unconsciously circling towards his left.

To the casual eye, McGregor might seem unbeatable, but those that have some experience in combat sports know he has some glaring holes waiting to be exploited by the right man. Khabib is most likely not the man to exploit his striking deficiencies, but it’s important to point out what he struggles with since anything can happen in the fight game. The first man to exploit some of these holes was Chad Mendes, who also took the fight on two weeks’ notice. McGregor’s countering relies on opponents overextending on their strikes and using distance manipulation to create a false sense of security where his opponents think they are out of range. Mendes knew this coming in. Instead of getting flustered with the pressure and flailing forward like every opponent before him, Mendes only came forward in short bursts with one or two strikes before moving out of distance and resetting. He caught McGregor clean a few times doing this and McGregor was hardly able to land any counters and had to rely on his leading attacks. Something else Mendes showed that could work wonders for Khabib was this slick level-change feint into an uppercut. Since McGregor will be cautious of the takedowns, he will most likely bite hard on any takedown attempt or level-change feint, which opens him up for the uppercut.

The first fight with Diaz is when we saw even more holes in his striking, including the one intangible that Is usually his source of success, his confidence. Without his overconfident personality, McGregor would never be the star he is today, but it can also be his biggest demise. He clearly didn’t take Diaz seriously in the first fight and was throwing the lead left straight with everything he had, leaving himself open for counters. We saw Conor dipping far to his right and even throwing himself off balance a few times when throwing the left and his low hands along with not keeping himself in a proper stance put him in the perfect position to be hit. Again, Khabib is most likely not the man to take advantage of these faults, but if he can stay calm on the feet and not overextend his strikes, he could have more success on the feet than expected.

This is a throwback fight of sorts with both men being rather one dimensional and both struggling with what the other excels at. McGregor’s striking is some of the best in the history of the sport, but he often looks lost on the ground. On the other hand, Khabib is one of the greatest grapplers to ever grace a cage, but is easily rattled on the feet. Something else that is concerning for McGregor going into this fight is his claim that he doesn't train for specific opponents and bases his camp on perfecting what he’s already great at. McGregor is not a great grappler and Khabib is not a great striker, so it would be silly for either to not train specifically for each other. This claim could just be part of McGregor’s “Mystic Mac” character, but if it’s true he might be in for five rounds of hell on the mat.