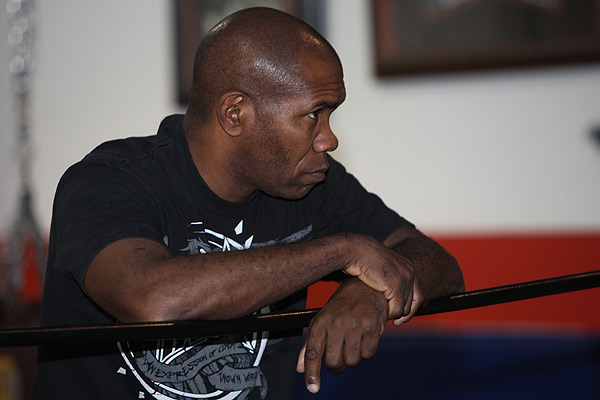 
“It was a surreal moment.”

Howard Davis Jr. was 20 years old and had only been boxing for five years when he entered the ring at the 1976 Summer Olympics in Montreal. He was in the gold-medal match against Romania’s Simion Cutov, and on top of everything else, his mother had passed away just days prior, prompting him to consider leaving the Olympics to be at her funeral. True to the spirit that would later come to define him, every obstacle and hardship became more motivation to fight. By the time he got a chance to lay flowers on his mother’s grave, Davis had a gold medal and the Val Baker Award for the Most Outstanding Boxer of the Olympics.

However, the surreal moment to which he was referring would not come for another four decades, when he was diagnosed with Stage 4 lung cancer earlier this year.

“I went into shock. I started crying,” Davis said, but once the initial vertigo subsided, he regained his calm determination. “Anyone who knows me knows that I’m a fighter. My wife and I went to work.”


Before the life-altering news surfaced, Davis had carved out a successful career and fulfilling life. Though world titles eluded him on two occasions, he became the first professional boxer to land a major network TV deal on CBS. The gold medalist hung up the gloves for good in 1996 with a 36-6-1 record, including 14 knockouts. Retirement naturally led to coaching and training.

Predictably, Davis started off training boxers, but as MMA fighters crept into gyms in greater numbers and with greater regularity, he did not discriminate.

“I never looked at it like one sport is better than another,” he said. “Whether it’s kickboxing, MMA, judo, karate -- I always got respect [for it].”

Davis became the boxing trainer at American Top Team in Coconut Creek, Fla., sharpening the hands of high-level MMA fighters, most notably Chuck Liddell. The boxing hall of famer gelled with the onetime Ultimate Fighting Championship light heavyweight titleholder, eventually scoring a coaching gig on the Liddell’s team for the 11th season of “The Ultimate Fighter.” More important than his relationship with Liddell or his brief resurgence on the reality series, coaching led Davis to meet Karla Guadamuz, who would become his wife. He made sure to attach a hyphenated Davis to her name as soon as possible.

“She was managing professional boxers,” he said. “She was looking for a trainer, and somebody told her about me, so she gave me a call and I started training her fighters.”

They were business contacts at first, but with a smile detectable through the phone, Davis carefully added, “One thing led to another.”

“I knew within nine months of knowing this woman that I wanted to be with her for the rest of my life,” he said. “I probably knew before she did, but when I popped the question, she knew right away, and then we got married.”

Though their relationship evolved from a professional partnership, that dynamic only strengthened through their marriage.

Together, they launched Fight Time Promotions in 2010. Based out of Florida, Fight Time has promoted 28 events, with another seven on the books from now until the end of 2016. No other promotion, regional or otherwise, puts on as many events in the state of Florida as Fight Time, which has helped propel the careers of fighters like strawweight standout Jessica Aguilar and welterweight blue-chipper Colby Covington, among others.

When the company inked an agreement with Davis’ old ally, CBS, to air all of its events in 2015, it was professionally and personally momentous, a step forward and a coming full circle of his career. Yet Fight Time aims to be more than just another MMA promotion; it closed out 2014 with a special event to benefit the nonprofit Autism Speaks organization. Engaging with and giving back to the community has always been the Davises MO since going into business. As the company continues to take off, Davis finds himself having to take a backseat in the business. The ongoing battle with cancer takes too much time and energy for him to be as involved as he would like.

“I do very little now,” he said. “My wife does the work. She cares for me and she cares for our daughter [and] keeps up with my itinerary. I really don’t know what I would do without her. She’s my rock of Gibraltar.”

That support has been a lifeline for Davis, not only as he continues to fight the disease but also as he and his wife have entered into the realm of political advocacy. 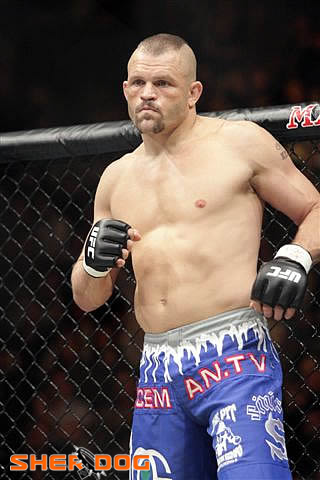 (+ Enlarge) | Photo: Sherdog.com
Liddell was a protégé.
Living with a terminal illness can be a powerful vehicle for reflection and self-discovery. Cancer prolongs the acquaintance with death in a way that often highlights what is most important in life, pushing whatever else is left to become existential elevator music. The Davises’ experience with cancer treatment has been an enlightening one, a valuable lesson in the politicized world of medicine.

His treatment was standard at first: cytotoxic drug cocktails and radiation therapy. Shortly after starting treatment, the Davises knew something was not working. Now under the care of Dr. Mark Rosenberg, Davis receives low doses of chemotherapy alongside several alternative measures. So far, it has been working.

“I’m starting to gain weight,” Davis added. “I’m a little stronger. Not much, but I’m getting there.”

The alternative treatment, however, is not covered by most insurance plans -- and it is not cheap. Of course, when the Davises encountered this problem, their inclination was to fight it. Thus, the Howard Davis Jr. Foundation was born. Guadamuz-Davis masterminded the project.

“We didn’t want this to be a sad story,” she said. “We wanted to use his name and mouthpiece to turn it into a positive. Let’s tell them his story but also raise money and awareness for alternative treatment.”

Right now, the focus is on supporting cancer research, raising awareness about the legitimacy of medical treatments that are not covered by insurance and providing financial assistance to other cancer patients seeking such measures. Eventually, political advocacy is likely.

“We have bigger plans,” Guadamuz-Davis said. “When the foundation is stronger, when we’re more well-funded, when Howard gets better, we’ll be making some noise about things that need to change. All medications should be covered.”


Few people understand the nervousness and excitement that comes with the sound of an opening ding of a fight: the crowd’s baited breath, the primal rush of staring a foe in the eyes. Davis knows the feeling well, with 173 professional and amateur boxing matches to his name. However, nothing can prepare you for the unconscionable news that you have cancer. As such, it is hard not to see the fight against cancer through a boxing lens, but the comparisons are few, according to Davis, who was also a talented basketball player and a former table tennis champion.

“Everything is mental and spiritual,” he said. “You have to combine both. Boxing is the most rigorous of all the sports I’ve played, and the body takes trauma. You have to get used to the trauma.”

“If you give up, then the fight’s over. If you fight to survive, you’ll make it, but first you gotta have a positive attitude,” Davis said. “When I was diagnosed, if I said to myself, “I’m gonna quit, I’m gonna die,” I’d be dead today. I truly believe that God has put me in this position for a reason, and it’s starting to come a little bit clear to me why I’m in this position.”

The overlap ends there, though. Cancer is far more capricious and unpredictable than any in-ring opponent could ever be.

“I never smoked in my life, never taken a sip of alcohol, but I have lung cancer,” Davis said. “How do you explain that? If I’m fighting in the ring, I have some control. If I have good defense, I can slip a punch. If my offense is good, I can throw a punch. My determination changes the direction the fight can go.

“Cancer -- how do you control that? It’s a different kind of fight,” he added. “I could put my hands up all I want, but it’s always gonna be a metaphor. It’s definitely a fight, just a different one. I have less control against cancer.”

“
If you give up, then the
fight’s over. If you fight
to survive, you’ll make it,
but first you gotta have a
positive attitude. When I
was diagnosed, if I said to
myself, “I’m gonna quit, I’m
gonna die,” I’d be dead today.

Everybody dies, but few have the opportunity to accomplish a greater good through their death. Davis fights every day with spirit and tenacity, not just to hold death back longer but to inspire the lives of others. Mostly, he fights because that is simply who he is: Self-belief and determination have long been stitched into the fabric of his being.

Whether it is benefit work with Fight Time, cancer treatment education through the foundation or subtle everyday acts of kindness, the Davises fight to make the most of a bad situation, to weave hope into what is otherwise a tragedy. When word reached the Davises that a local kid had his iPad stolen, they responded.

“My wife called the salon, and we went out and bought him a new one,” Davis said. “It’s the kind of thing the Davis family does. We give to charity every year. We raised about six to seven grand last year to Autism Speaks. Every year we try to give back into the community. We do it quietly without fans or applause. It’s just what we do.”

They ask not for thanks or recognition but for support.

Davis has led a great life and not just because of his individual achievements. His endearing qualities stem from the strong women behind him. Ultimately, it all comes back to his mother, whose last words to him were, “You better bring home that gold.” She told him to keep fighting, even in her absence. Today, in the presence of his loving, supportive wife and faced with a new opponent in a completely different kind of fight, that is exactly what he will keep doing. Now more than ever, it is fight time for one Howard Davis Jr.
« Previous Hey Harold: Golovkin vs. Lemieux Next Like Michael Carbajal, ‘Chocolatito’ is a Small Diamond Fitted for Big Ring »