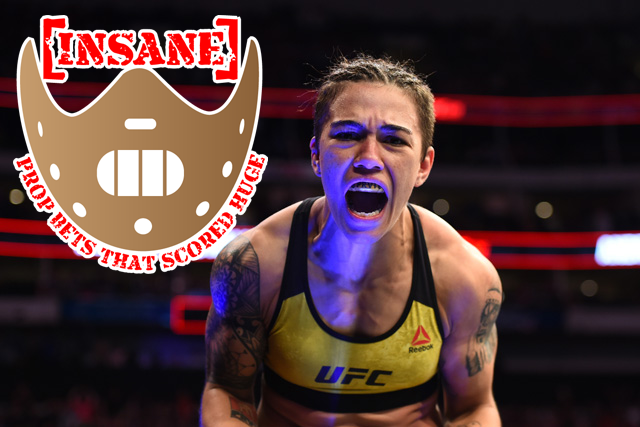 One of the best ways to extract better odds when betting on fights is to take a deeper look at the prop bets available at the sportsbooks. Oftentimes these props are extreme longshots that you may not think have a chance to cash, but this is MMA and the unthinkable often happens in this sport. At UFC 228 on Saturday in Dallas, this was no different. A number of Insane Prop Bets scored huge:


Another insane prop that scored huge was Andrade knocking out Karolina Kowalkiewicz in the co-main event. It was an incredible performance by Andrade, as she came out with guns blazing, threw caution to the wind against Kowalkiewicz as soon as the opening bell rang and landed a massive punch that knocked the Polish fighter cold early in the first round. Can you think of a more devastating one-punch knockout in women’s strawweight history? Even though Andrade is a power puncher, Kowalkiewicz had never been knocked out before, so the prop on Andrade winning by knockout was available at a monstrous +777 number. Anyone who was smart enough to bet on this big prop deserves their monster payout.


Even if you had Woodley beating Darren Till in the main event, odds are you had him winning the fight by decision or knockout. Instead, he won the fight by submission with a second-round brabo choke. The win over Till marked the first submission for the champ inside the Octagon and the first victory by submission anywhere since a 2009 arm-triangle choke finish on Rudy Bears in Strikeforce. Fans often forget Woodley actually opened his MMA career with four submission wins in his first five appearances. However, since he had not secured one in nearly a decade, the insane prop for him to tap Till at +865 flew under the radar. Congrats to anyone who bet it.


Although most figured Suarez would beat Carla Esparza -- she was a huge betting favorite to win the fight -- most thought she would do so by decision. It looked like the fight was destined to end that way, until the last moments of the match, as Suarez was stopped Esparza with strikes on the ground at 4:33 of the third round. It was only the second TKO loss of Esparza’s career and the first TKO win for Suarez since 2015. If you had the foresight to bet on this prop at +550, congrats on your winnings.


One of the most impressive finishes of the night came courtesy of Sterling, who submitted Cody Stamann with a kneebar in the second round of their bantamweight fight. The tapout win marked Sterling’s first submission since 2015 and the first time Stamann had been submitted as a professional. The prop on Sterling to win by submission was sitting out there at a robust +745. Praise is in order for anyone who was smart enough to take a piece of that.


Another highlight-reel submission came at the hands of Miller, who tapped Alex White with a first-round rear-naked choke. Not only was this the first submission loss of White’s career, but it also marked Miller’s first submission victory since he tapped Yancy Medeiros in 2014. Anyone can see why the prop was available at such a big number, with Miller winning by submission cashing out at +685.

Adam Martin is a mixed martial arts journalist who has been covering the sport since 2011. He is currently the lead odds analyst for Sherdog.com as well as the lead staff writer for MMAOddsbreaker.com. Adam is also the co-host of “The Parting Shot Podcast” on iTunes. His favorite fight of all time is Dan Henderson vs. Shogun Rua and he wishes Pride never died. Adam is based out of Toronto, Ontario, Canada, and he is a graduate of the University of Toronto and Centennial College. Get in touch with him on Twitter @MMAdamMartin.
« Previous Fight Odds Beating the Books: UFC 228 Next Fight Odds Parlaying and Praying: UFC Fight Night 136 »