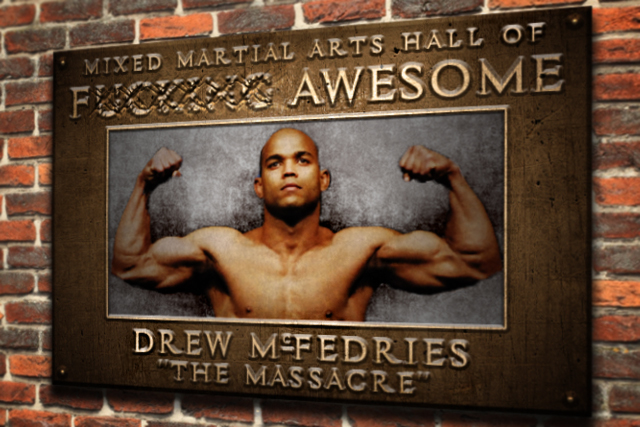 THE PITCH: It may be difficult to imagine for a fan coming to the sport in 2018, but once upon a time, there was no UFC Performance Institute where the Francis Ngannous of the day could have the concussive force of their strikes tested under laboratory conditions. No, during McFedries’ early career and 2006-09 Ultimate Fighting Championship run, we were forced to measure his punching power the old-fashioned way: timing how long it took his opponent to wake up and ask if anybody wrote down the license plate of that truck.

A pure brawler, McFedries was blessed with a level of freakish hitting ability, particularly in his fists, that is difficult to describe without resorting to tired fight clichés. “One-punch power” is a quality that fans and media are often too eager to ascribe. McFedries really had it, and then some. Beyond simple knockout capability, he had the kind of outlandish power that not only made men fall down but appear to defy the laws of nature in the process. That kind of power, the power to make opponents fly across the room like cartoon characters, to go down from seemingly glancing punches or to wander around like freshly decapitated poultry until the body realizes it isn’t receiving any more marching orders from the head is truly rare.

One fine display of that power, not to mention an example of another fight cliché -- power as the “great equalizer” -- was McFedries’ Octagon debut against Alessio Sakara at UFC 65. A rousing back-and-forth first round seemed to be going the way of “Legionarius,” as the niftier boxer began to land with increasing ease, knocking McFedries’ mouthpiece out and even eliciting a rare takedown from the wrestling-averse slugger. Then, with about a minute left, McFedries tagged Sakara with a tired-looking right uppercut. Sakara sat and then reclined, so smoothly and casually that it almost looked as if he was inviting McFedries into his guard or to do crunches with him. Only when McFedries pounced and put him away with a volley of punches did it become obvious that Sakara had been mostly out before his rear end even touched the canvas.

Perhaps the most telling endorsement of McFedries’ power comes from one of the toughest men in the history of the sport. Former UFC welterweight champion Robbie Lawler was McFedries’ teammate at Miletich Fighting Systems in the early 2000s, when the preeminent team in the sport at the time was infamous for its full-contact, full-speed sparring sessions behind closed doors. As you read the following quote, think of the names on Lawler’s résumé by May 2016, when he said this: “Drew McFedries was the hardest hitter I’ve ever been around. A big, strong, athletic guy with power. He didn’t have to hit you with a hard shot or load up. Even the little short shots could hurt you.”

McFedries’ competitive ceiling against the world’s best was ultimately set by the predictability of his striking, by a below-average gas tank for his weight class and especially by the severe liability of his ground game. Four of McFedries’ five UFC losses were by submission. In several cases, they came against opponents not known for spectacular submission offense, and in most cases, McFedries looked hapless in the process.

SIGNATURE MOMENTS: The most obvious highlight on McFedries’ reel is his knockout of Jordan Radev at UFC Fight Night 10. It was never a fight; the opening glove tap is easily the best shot the Bulgarian landed, and it was not even a very good glove tap. Radev, who was not known as a chinny fighter, was staggered badly by McFedries’ first pair of punches. Perhaps too dazed to even try and take down his opponent, Radev simply kept staggering and resetting in his stance as McFedries blew him up with hooks. It looked less like a UFC fight and more like someone playing two-player Tekken by himself.

A final uppercut sent Radev to the floor, where McFedries tacked on several absolutely savage follow-up shots. A few seconds later it was over, Radev board-stiff and bleeding from the mouth in the center of the Octagon, a chilling end to the 33-second blowout.

However, there is no fight that exemplifies McFedries better than his match with Martin Kampmann at UFC 68 in March 2007. In just 4:06, “The Massacre” showed what made him awesome, as well as what made him frustrating. To recap, McFedries:

• Laid a protracted, one-sided beating on a solid MMA striker with an amateur background in muay Thai and boxing, knocking down Kampmann, bloodying his face and having him looking generally overwhelmed;
• Began breathing with his mouth open less than two minutes into the fight, so early that Joe Rogan speculated aloud about alternate explanations for it, because it seemed too bizarre that he could already be gassing out;
• Allowed an effortless-looking body lock takedown into side control from a man he probably outweighed by 20 pounds on fight night;
• Offered no perceptible resistance as Kampmann set up an arm-triangle and appeared to go to sleep instantly once the Dane stepped over to finish.

THE HOFA COMMITTEE SAYS: This is an easy call. For his frightening power, for his ultra-aggressive style, for his being the author -- and recipient -- of some shocking finishes and, yes, for his failure to adapt or evolve once he ran into guys he could not just punch through, McFedries is exactly the kind of fighter for which the Hall of [email protected]#$%&g Awesome was made. To say that McFedries always went out on his shield would be an insult. What shield? This guy carried axes in both hands, all day.