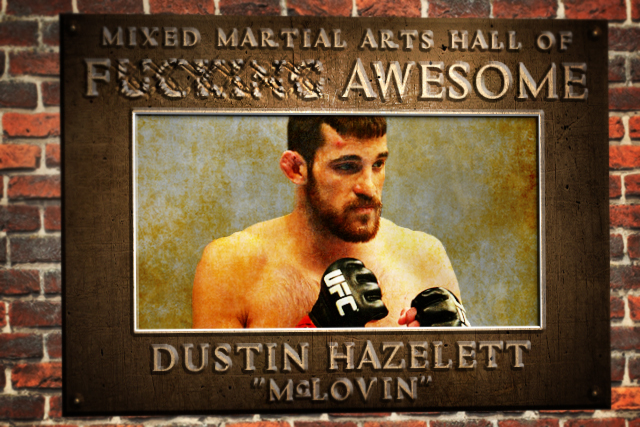 
“I love jiu-jitsu and I want to make jiu-jitsu cool again.” -- Dustin Hazelett

THE PITCH: If you are familiar with Hazelett’s body of work, you can only look at the quote that opens this article and say: mission accomplished. From the beginning, mixed martial arts has been a constant arms race, refining the individual styles that make up the sport’s vocabulary while at the same time generating fighters who are better and better at synthesizing them into a seamless whole. For one long, shining moment, however, Hazelett stood above that ebb and flow as a true specialist who used his beloved art to do some of the coolest things ever seen in a cage before or since.

To say Hazelett did not look like a typical professional fighter would be putting it mildly. He was in his early 20s during his Ultimate Fighting Championship run and, when clean-shaven, looked like a high school sophomore. In a welterweight division stocked with genetic lottery winners like Georges St. Pierre and Josh Koscheck, Hazelett’s lanky frame -- he could and did fight at lightweight more than once -- was unimposing, to say the least. His facial expression at weigh-ins and face-offs was not the angry scowl of a Carlos Condit nor the thousand-yard stare of a Fedor Emelianenko but the look of a man standing in line at the DMV. The combined visual effect, frankly, was “harmless nerd.” Hazelett’s acceptance of this fact is evident in his embrace of a nickname lifted from the quintessential nerd character of 2000s cinema.

If Hazelett was not exactly Central Casting’s choice for a cage fighter, he was ideal as a walking infomercial for Brazilian jiu-jitsu. He had in fact been a nerdy, picked-on kid in school who started taking grappling glasses at age 16 after two incidents where his head was literally dunked in school toilets like some scene from a bad 80s movie. He turned out to be something of a prodigy on the mats; by the time Hazelett debuted in the UFC at age 20, he was a brown belt under Jorge Gurgel, and the number of people who could have successfully given him a swirlie was growing very small.

Like Royce Gracie a decade and a half before, Hazelett presented as an unassuming-looking fellow who made jaws drop as much with technique as by the sheer optics of whom he beat and how he did it. Where Gracie had beaten a gauntlet of larger, stronger-looking men using a martial art they were unprepared to deal with, Hazelett appeared in the UFC and embarrassed fighters who did know how to grapple -- and fighters who in some cases were submission specialists themselves -- with a blend of technique and creativity that appeared to be on an entirely different level.

Eventually, the pendulum swung the other way, and Hazelett never completed the full transition from dazzling prospect to true contender. Always a willing and improving striker, he was nevertheless a defensive liability on the feet for most of his career. Two of his last three fights -- both TKO losses -- tell the tale. In Rick Story, Hazelett faced a bruiser of a welterweight who was both savvy enough to deal with him jumping guard and mean enough to make him pay for trying. Against Paul Daley, Hazelett made no apparent attempt to bring the fight to the floor. Opting to stand and trade with one of the most dangerous strikers in the sport, he was flattened in half a round.

Whether he could have overcome those competitive and technical hurdles is a question never to be answered. Hazelett walked away from MMA at age 24, embarked on a career as an emergency medical technician and has never looked back. While the sport surely misses him and the Hall pines for his return -- at the time of this induction he is still only 32 -- happy exits from this sport are rare enough that we’re just grateful we got to enjoy him while we could.

SIGNATURE MOMENTS: The most Dustin Hazelett year ever was 2008. It got off to a rough start in March with a TKO loss to Koscheck, whose combination of world-class wrestling and concussive punching power made him pure stylistic poison for Hazelett. After that, however, Hazelett finished out his year by pulling off two submissions the likes of which have never been seen in the Octagon before or since. The less-impressive of the two would have made a “Submission of the Year” list most years, while the other is still considered one of the greatest subs of all-time.

At “The Ultimate Fighter 7” Finale in June, Hazelett faced Josh Burkman. After a close, back-and-forth first round, the second seemed to offer more of the same until, with about 30 seconds left, Hazelett used a whizzer to force Burkman to his knees. As Burkman popped back up, Hazelett -- still maintaining the overhook -- shifted behind him and, rather than simply take his back, slipped his legs in front of Burkman’s body and secured an armbar in one smooth motion. The two were crashing back to the mat before most people in the building, Burkman included, knew what was happening. To his credit and despite his obvious shock, Burkman attempted to lock his hands and fight the hold, but to no avail; he was forced to tap seconds later. UFC color commentator, noted grappling mark and all-around excitable guy Joe Rogan lost his mind, and for once, nobody watching could blame him.

So remarkable was the whizzer-to-armbar finish that it nearly overshadowed the first and only reverse armbar in UFC history, which Hazelett inflicted on Tamdan McCrory at UFC 91 in November. It was another masterful display; Hazelett trapped McCrory’s right arm in an omoplata -- eliciting another pop from Rogan, of course -- and, rather than sweep or simply wait for his opponent to try and extricate himself, went to work, threatening with a variety of conventional and straight armbars before securing the unprecedented and very painful-looking finish. For his efforts, Hazelett was rewarded by the UFC with his second straight “Submission of the Night” bonus and by Gurgel with his Brazilian jiu-jitsu black belt.

THE HOFA COMMITTEE SAYS: “McLovin” is absolutely the kind of fighter for whom the HOFA was built. Like fellow charter member Drew McFedries, Hazelett may not have been a perfect fighter, but he was a unique and dangerous one, and at the height of his powers, his fights were appointment viewing, something to circle on your calendar.