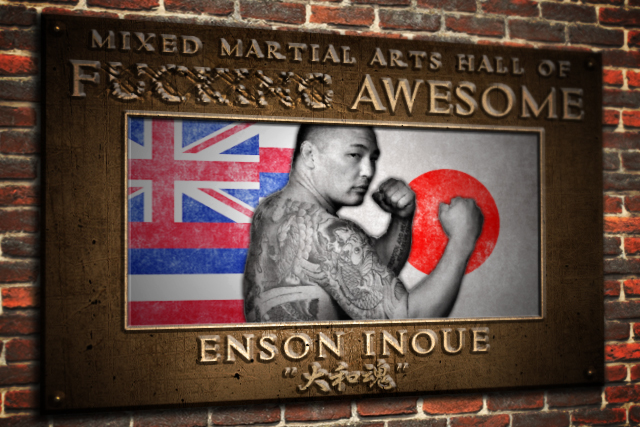 THE PITCH: Removed from context, some of the qualities that define Inoue might not sound like the components of awesomeness. In fact, many of them are traits we would -- and do -- snicker at in other fighters. He is a Brazilian jiu-jitsu black belt who was perfectly content to stand and wing punches with fighters he could have tapped in his sleep. His 12-8 career record might be closer to .500 if not for some very Japanese matchmaking against the likes of 49-year-old Casemiro Nascimento Martins and the morbidly obese, apparently barely trained Soichi Nishida, whom Inoue actually defeated twice.

Beyond his fighting style and in-ring legacy, Inoue’s embrace of the warrior ethos is so deep that it is reflected in his nickname. “Yamato-damashii” translates roughly to Japanese spirit or soul but contains a heavy connotation of “fighting spirit,” and it is associated with the samurai of the Edo period. The same mentality that inspired his choice of nickname has led Inoue to drop some of the most awesomely bad-ass quotes in mixed martial arts history. In addition to the ridiculously cold one-liner that opens this article, Inoue has dropped such nuggets of wisdom and inspiration as:

MMA fighters talking about their sport in terms of life and death usually end up as punchlines: “To the death, Georges,” anybody? So why, given his record and penchant for over-the-top sound bites, is Inoue a beloved icon instead of a laughing stock? After all, “stood and brawled to his own strategic detriment, while calling himself a samurai” is something we could say just as accurately about Andy Wang.

It is one of the driving principles of the HOFA that we should never resort to “you had to be there” as justification of a fighter’s awesomeness. That kind of lazy statement not only reinforces the smug elitism of the old-school fan but discourages actual analysis of the past, inviting old and new heads alike to don the rose-colored glasses and agree that “things were just better back then.” For that reason, we will not say that you had to be there in order to understand why Inoue is awesome. However, we will say that all of these odd elements add up to awesomeness in Inoue’s case only because it’s Enson Inoue. While that sounds like circular reasoning, it is not. The difference between Inoue talking about being willing to die in the ring and almost every other fighter who has said a similar thing is that you believed Inoue meant it, and he fought as if he meant it. MMA two decades ago was just as rife with self-promoters, fakers and clowns as it is now. Don’t let anyone tell you differently. Inoue stood out then, as he would if he were debuting today, as a legitimate hard-ass, a genuine wild man and a bit of a spiritual seeker and wanderer.

However, if the only thing Inoue had going for him was conviction, we wouldn’t be discussing him right now. As with many fighters who fought primarily in the 1990s, the devil -- and greatness -- of Inoue’s record are in the details. Because of his BJJ background, he debuted in Shooto as a pro, bypassing its robust amateur system and forcing him to learn on the job. While it is true that Inoue benefited from matchmaking in Shooto and Pride Fighting Championships, he suffered from it, as well. The 5-foot-10 Inoue would likely be a middleweight today. Instead, he fought at his walking weight of around 210 pounds in grueling fights against true big-bodied heavyweights like Mark Kerr, Heath Herring and Antonio Rodrigo Nogueira. The result is that Inoue’s record, like those of fellow Pride tweeners Kazushi Sakuraba and Murilo Rua, is not truly indicative of the fighter he was, though mercifully, Inoue seems to have survived that gauntlet without the same kind of physical or neurological wear and tear.

In retirement, Inoue has remained very much the same man he was during his competitive career. He opened a chain of martial arts academies in Asia and the South Pacific; he sells bracelets to help people focus their spiritual energy; he walked across Japan to raise money for disaster relief; and he still finds time to help those in need, such as an elderly woman he saw fall from her bicycle. Forgive our ending this biography on a dark note, but Inoue is leading the kind of life we hoped Evan Tanner would be living in 2018.

SIGNATURE MOMENTS: Easily the most notable scalp in Inoue’s trophy case is Randy Couture, whom he defeated at Vale Tudo Japan in 1998. While it can be argued that Randy wasn’t really Randy yet -- and submission defense was a notorious liability early in Couture’s career -- it was a beautiful armbar from the bottom that ended it, patient in setup and then shockingly quick in execution. Couture tried to stand and pull out of the hold, but Inoue was already going belly-down and Couture was tapping a second later. It is also possibly the fight in which Inoue fought the most like a BJJ black belt and, well, the least like Enson Inoue.

However, in our opinion the signature performance of Inoue’s career, the one that makes all of his samurai bluster awesome instead of dorky, is his fight against Igor Vovchanchyn at Pride 10. At the opening bell, Inoue wisely attempted to clinch and throw Vovchanchyn, who shucked him off and threw a flurry of punches. Within five seconds, all thought of the takedown had been abandoned and Inoue was standing and trading wild haymakers with one of the heaviest-handed sluggers this sport has ever seen. It ended up being a mugging, and thanks to Pride’s 10-minute first round, it was a long and ugly one, maybe the worst in the organization’s history not delivered by Fedor Emelianenko.

After 10 minutes, Inoue had been beaten so severely that he needed to be half-dragged, half-carried back to his corner. Face and one side of his head grotesquely lumped up, he nonetheless had to be restrained from standing back up when the doctor stopped the fight. Afterwards, Inoue took the mic, told the Saitama crowd that he had wanted to win and dedicate his victory to the late Andy Hug and apologized that his heart had not been strong enough. The emotional soliloquy, delivered with eyes swollen completely shut, made it difficult not to believe that this man was in fact willing to die in the ring.

Also, even though the aforementioned Nishida fight at Pride 5 was the worst kind of Pride squash match, Inoue had his dog in his corner, with “Yamato-damashii” shaved into his fur. That is all kinds of legendary and probably not even the most useless cornerman we have ever seen.

THE HOFA COMMITTEE SAYS: Inoue’s career path would be literally impossible for a fighter starting out today to emulate. In the ring and cage, he had some impressive highs as well as some bruising lows. Through it all, Inoue always came across as the realest of the real. To this day, anytime a fighter refers to themselves or their opponent as “a true warrior,” we can’t help but think of the heart, the stones and the wild streak of “Yamato Damashii.”