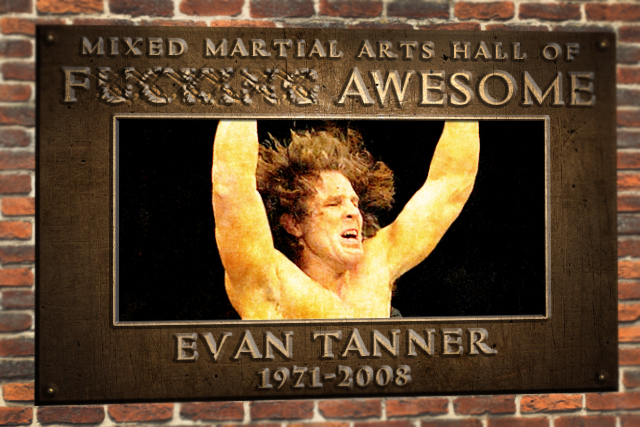 
“I will do nothing lightly. When I walk, I will walk heavily. When I fight, I will fight with conviction. When I speak, I will speak strongly. When I feel, I will feel everything. When I love, I will love with everything."
- Evan Tanner

If your love of mixed martial arts dates back much more than a decade, you are probably already feeling a rush of emotion at the mention of Tanner’s name. If you came to the sport in more recent years, it may not be quite as clear what was special about him, but that’s what the HOFA is for. Tanner was a true seeker and wanderer, a man who dropped out and spent years drifting as a bouncer, carpenter and ditch digger rather than wrestle in college, before deciding to test himself in the new sport of no-holds-barred fighting, then reached the highest heights, however briefly. All the while, Tanner gave the impression that cage fighting was just something he did in between trying to live life to the fullest and make the world a better place.

But first, the facts. As an example of a pioneering fighter who spanned the gap from the proto-MMA era to the modern era, it would be hard to top Tanner. Everything about his career seems to bridge two worlds: the past and the future; the underground blood sport and the global phenomenon. He learned to fight by watching VHS tapes by himself, yet he was one of the first prominent fighters to make use of a personal website and social media to connect with fans. He came up in the Wild West of the 1990s Texas NHB scene -- he fought 250-pound Heath Herring twice -- yet he won a UFC title in the post-“The Ultimate Fighter” era and owns a stoppage win over Robbie Lawler, who is still a top-10 fighter in 2019.

Hailing from Amarillo, Texas, Tanner won state wrestling championships his junior and senior year in high school in spite of only having started wrestling as a sophomore. In light of that accomplishment, it is perhaps less surprising that he took to fighting so well with nothing but a pile of “Gracie in Action” tapes as his coach. He came roaring out of the same Texas Panhandle circuit that produced Herring and Paul Buentello, and by the time he made his own way to the UFC in 1999, he sported an official record of 16-1. Undertrained and wild even by the standards of the day, Tanner had done it on sheer athleticism, instinct, heart and grit, and he had done it against much larger men in some cases, including Herring, Buentello and Justin McCully, whom he defeated with a joint-crunching kimura -- even if the stoppage was iffy -- to win the Pancrase Neo-Blood tournament in 1998.

True to his nomadic spirit, Tanner bounced back and forth between the UFC, Pancrase and Texas’ USWF for another year before landing in the UFC for good in 2000. He quickly made his way to a shot at the light heavyweight title held by Tito Ortiz. It didn’t go well, as Ortiz knocked Tanner unconscious with a resounding slam in the first round.

From there, two changes happened in relatively short order. First, Tanner began training with Team Quest in Gresham, Oregon. Under the tutelage of head coach Robert Follis and training alongside top fighters such as Randy Couture, Matt Lindland and Dan Henderson, Tanner’s game tightened up considerably and he went on an impressive winning streak, until he ran into promotional newcomer Rich Franklin at UFC 42. Franklin’s sharper kickboxing was simply too much, and Tanner went down under a hail of first-round punches.

At that point, the second change took place: Tanner decided to drop to middleweight. The move rejuvenated his career once again, as he won two straight fights over brash contender Phil Baroni, easily tapped out future champ Lawler and then was chosen to fight David Terrell for the 185-pound strap vacated by Murilo Bustamante. Tanner would win that belt at UFC 51 in one of the most memorable title fights in UFC history to date, but more on that later.

His title reign would be a short one. Tanner’s old nemesis, Franklin, followed him down to middleweight, earmarked by the UFC to bring stability and his genial former-math-teacher charisma to the long-unloved division. Franklin defeated Tanner again, this time via fourth-round doctor stoppage, Tanner’s face a mask of blood.

Tanner’s career spiraled downwards from there. He fought twice more, losing to David Loiseau and beating Justin Levens, before taking two years off from competition. When he came back in 2008, he did not look the same. Always a drinker, Tanner had had a rough few years off. In his final fight, a dispiriting split-decision loss to Kendall Grove at “The Ultimate Fighter” Season 7 finale in June, he looked as if he had aged 10 years. In the wake of the fight, Tanner acknowledged that the hard-lived time away had compromised his performance, and speculated openly about his future in the sport.

Three months after the loss to Grove, Tanner went camping, alone, in the Southern California desert. In response to fan concern over his well-being, he posted that he would be fine and that the trip was not a re-enactment of “Into the Wild.” The words would prove chilling, as Tanner was reported missing by friends, and a search was mounted. Tanner’s body was found by a Marine rescue team, the cause of death determined to be heat exposure. While he likely died on Sept. 5 or 6, the official date of death is Sept. 8, 2008, 11 years ago today. The eternal wanderer and nomad had gone home, leaving a large and ragged hole in the MMA community.

SIGNATURE MOMENTS: For most HOFA inductees, this section is divided. The fighter’s competitive high points are discussed, as well as the most electrifying highlight. For Tanner, there is no need, as the high-water mark of his fight career is also the top moment in his highlight reel.

In February 2005, after a 3-0 run upon dropping to middleweight, Tanner was slotted opposite David Terrell to fight for the vacant 185-pound title. “The Soul Assassin” was a rising force and a superstar in the making: a Brazilian jiu-jitsu black belt under Cesar Gracie who was also possessed of preternatural fast-twitch reflexes and knockout power, who had splattered Tanner’s training partner Lindland in 24 seconds in his last outing. Terrell was young, exciting, cocky in a good way, and on a five-fight win streak. He was the betting favorite in spite of having only six career fights, compared to over 30 for Tanner.

After a tense first 90 seconds in which Tanner did not throw a single strike, Terrell grabbed an arm-in guillotine and jumped guard against the fence. As the two men sank to the canvas, UFC color commentator Joe Rogan proclaimed the fight to be over approximately two and a half times, and the choke did indeed appear to be deep. The crowd roared as Tanner grimaced, his face reddening. However, it was not over just yet. Tanner extracted his head from the guillotine and the previously amped crowd positively exploded as he sat up in the guard of a completely deflated-looking Terrell. Rogan warned against the dangerous submission game of Terrell, but there was no point; the light had already gone out of his eyes and he looked more bewildered than anything else as Tanner punched and elbowed his head. Seemingly an eternity later, at 4:35 of the first round, referee Herb Dean waved the fight off.

While it might be overstating the case to say that something broke in Terrell that night, the hottest prospect in the UFC would only fight once more before retiring from competition. Meanwhile, Tanner was now the middleweight champion of the world. It was the great shining moment of a meandering career that had started in a bedroom with a VCR and had taken him to the pinnacle of the sport.

THE HOFA COMMITTEE SAYS: Tanner checks all the boxes for a shoo-in to the Hall of [email protected]#$%&g Awesome. Legitimate high-level accomplishment, impressive highlights, a unique personality and vibe -- they’re all there. The only stumbling block was Tanner’s UFC title, as the HOFA charter specifies that inductees must have no titles in a major promotion. However, with the induction of the late "Kid" Yamamoto last year, where the guidelines were bent slightly for his posthumous inclusion, a precedent was set. Since it is 11 years ago today that MMA lost one of its true free spirits -- who just happened to be a UFC champion -- the committee elected, in the end, to make another exception. No bylaws have changed, but the committee will continue to review future candidates on a case by case basis.