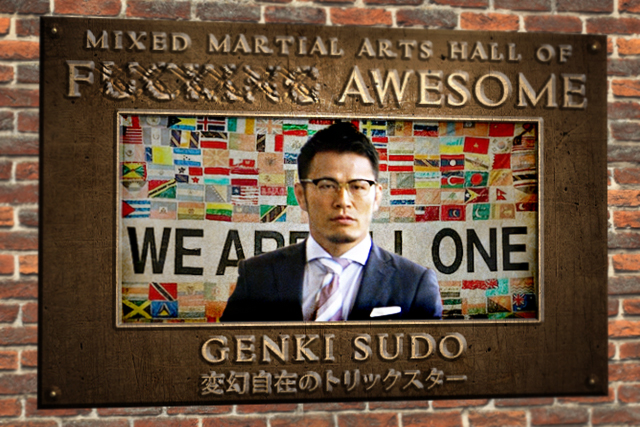 
“I can’t decide which I like better, fighting or dancing. I think dancing." — Genki Sudo

Fighter. Dancer. Godfather of the spectacle walkout. Musician. Actor. Author. Coach. Activist. Senator. In an era in which the label “renaissance man” is thrown around too easily, Sudo has played so many roles so convincingly and moved between them so seamlessly—often juggling several at once—that he redefines the term.

Coming up in the late 1990s in Pancrase, Sudo rode the early wave of Japan’s kakutogi boom and in many ways exemplified the unique aesthetic of early-2000s Japanese MMA, where professional wrestling-style showmanship, over-the-top burlesque production values and serious martial arts spirit combined to form a strange, glorious whole. Sudo managed to embody all three. He championed the fighter walkout as a form of entertainment in its own right, elevating it to heights that even kindred spirit Kazushi Sakuraba would be hard-pressed to match. His in-ring performances bordered on performance art, as well; one moment, Sudo might be dancing away from his opponent with his back turned, while in the next, he might throw out a technique so preposterous that it was difficult to believe it had been executed on a non-cooperating opponent in a no-holds-barred fight. More on that later.

However, Sudo’s awesomeness springs not only from the sheer entertainment value he brought to the ring but from the competitive excellence that quietly accompanied and reinforced it like the dark metal framework holding up a million-watt jumbotron. True to the anything-goes spirit of the place and time, Sudo once fought a man two and a half times his size in 400-pound Eric “Butterbean” Esch, yet in between taking circus sideshow matches, dancing his way down the ramp in kabuki masks and pulling off pro wrestling spots in real fights, Sudo also managed to hang losses on some very good fighters, including future champions Nate Marquardt, Mike Thomas Brown and Hiroyuki Takaya. While his results were mixed when he came up against the best of the best, Sudo racked up his career mark of 15-4-2 primarily in Pancrase and K-1 when they were among the top organizations in the world for lighter weight classes, and it is worth noting that his 2-1 UFC mark features two definitive submission wins over Brown and Leigh Remedios against one controversial decision loss to Duane Ludwig.

At K-1 Premium Dynamite on New Year’s Eve 2006, Sudo easily tapped future World Extreme Cagefighting knockout artist Damacio Page. Then, to the surprise of everyone—his own cornermen apparently included—the man of many talents announced his retirement from fighting at the age of 28.


Closing in on 30 million views; not bad for one's third career.


It should come as no surprise that someone who already had credits as an author, television and film actor by the time he hung up the gloves has been quite busy since. Sudo has continued to write and act, and in 2009, he formed World Order, an electronic music group known for—of course—spectacular public performances featuring tightly choreographed dance sequences. In July 2019, Sudo set aside his entertainment pursuits and transitioned successfully to yet another career: public service. Always politically outspoken—his “We Are All One” motto and banner are among the things for which he is best known—Sudo ran for the House of Councillors, which is the upper house of the Japanese legislature and roughly corresponds to the United States Senate, and was elected to a six-year term. Still only 41 years old as of this induction, we can only watch and wonder what one of MMA’s truest renaissance men will do next.

SIGNATURE MOMENTS: In terms of competitive legacy, Sudo’s best year was 2005. In March, he gave one of the greatest kickboxers of all-time, Ramon Dekkers, a rude welcome to MMA, heel-hooking him in three minutes. Sudo then entered the K-1 Hero’s middleweight (154-pound) tournament. At Hero’s 3 in September, he tapped Takaya and Kazuyuki Miyata in the same night to advance to the final. He did so with a minimum of dancing and no flying triangles, but simply with conditioning, athleticism and solid skill in all three phases of MMA.

The tournament final, on New Year’s Eve 2005, saw Sudo take on fellow HOFA inductee Norifumi Yamamoto. It did not go well for Sudo, as “Kid” was at the height of his terrifying powers. However, as noted in Yamamoto’s induction entry, the stoppage was premature, with Sudo rocked but still very much moving and trying to better his position when the referee intervened. Whatever the outcome might have been if not for the referee’s decision, the fact remains that Sudo was the runner-up in a legitimate grand prix, coming in second to one of the top pound-for-pound fighters in the world at the time. As a career high point, one could do much worse.

For sheer highlight value, there is much to choose from, silly as well as sublime. After all, we are talking about a man who made a show of winding up his fist like a cartoon character before dancing into range against “Butterbean.” However, if we are forced to pick a single moment that sums up what it was like to watch Sudo at his best, there can be only one choice: his ankle lock submission of Craig Oxley at Pancrase Trans 6 in 2000. The submission hold itself is standard fare, nothing special, but it is how the two men got into that position that immortalizes the moment. Halfway into the first round, Sudo was working from within Oxley’s full guard, attempting to pass as the American closed his guard and controlled Sudo’s posture with his arms.

Perhaps the most mind blowing submission in the history of MMA - a Giant Swing into an Achilles Lock!

Suddenly, Sudo simply stood up, trapped Oxley’s legs under each of his arms and performed what old-school pro wrestling fans would call a Giant Swing, whipping Oxley around the ring by his ankles. After a full 720-degree spin, Sudo let them come crashing back to the canvas, keeping hold of Oxley’s left leg and applying an Achilles lock. After a few seconds of struggle, Oxley tapped. It looked for all the world like a well-executed pro wrestling finish, or an adult playing with a child, and Sudo had pulled it off in a real fight. For all the seeming contradictions it embodies, it may be the quintessential Sudo moment—we laugh, but we are amazed. It was a crazy idea but it worked, and even by wrestling standards a Giant Swing is considered kind of a hokey move. Perhaps the most Sudo thing about the moment is the sneaking suspicion that he only did it because the fight was getting boring, and one of MMA’s all-time great entertainers could not abide by such a development.

THE HOFA COMMITTEE SAYS: Sudo is absolutely the kind of fighter for whom the Hall was built. With all due respect to “Neo-Samurai,” the handle given to him for his UFC debut, his original Japanese nickname, which appears on his HOFA plaque and translates roughly to “Magical Transforming Trickster,” fits him far better. Endlessly entertaining, underratedly accomplished and so restless of mind and spirit that he left the sport early to go dazzle the world in other ways, his was a one-of-a-kind journey. It is with great pleasure that we say: Genki Sudo, you are [email protected]#$%&g awesome.
« Previous The MMA Hall of [email protected]#$%&g Awesome: Evan Tanner Next The MMA Hall of [email protected]#$%&g Awesome: Yves Edwards »