Two years ago, injury forced Kyoji Horiguchi to relinquish both of his belts. Having reconquered one already, next week he will look to complete his comeback.

The 31-year-old American Top Team representative, who faces Sergio Pettis for the vacant Bellator MMA bantamweight title in the main event of Bellator 272 on Dec. 3, established himself as one of the top fighters in the sport by holding the Bellator and Rizin Fighting Federation bantamweight titles simultaneously until he vacated them in November 2019. He won back the Rizin belt in a sensational beatdown of Kai Asakura at Rizin 26 last New Year’s Eve. The win carried an additional sheen of sweet revenge, since Asakura is responsible for the only blemish on Horiguchi’s sterling 14-1 run since losing to Demetrious Johnson six and a half years ago.

Horiguchi is not the only man fighting next week with Rizin bantamweight hardware in his trophy case. Former champ Manel Kape vacated the belt last April when he signed with the Ultimate Fighting Championship, only to see his promotional debut held up for nearly a year thanks to a series of opponent injuries and COVID-related cancellations. Kape’s UFC run so far has been shaky yet promising, going 1-2 with one borderline robbery of a loss, and one sensational knockout win marred by a bad weight miss.

What hasn’t changed yet is that several years into its existence, the belt has yet to be successfully defended a single time. That may change next year with a healthy Horiguchi and a card schedule approaching pre-COVID levels, but for now, here is the brief and tumultuous history of the Rizin bantamweight title. It tells the story of a division with some dazzling individual talents, but which has struggled to establish itself as a stable, competitive entity. 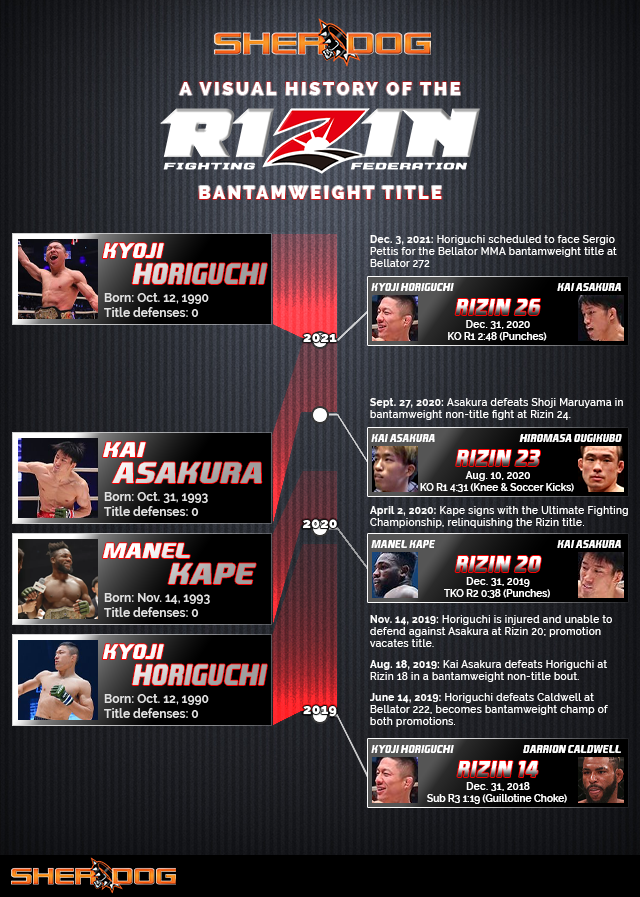