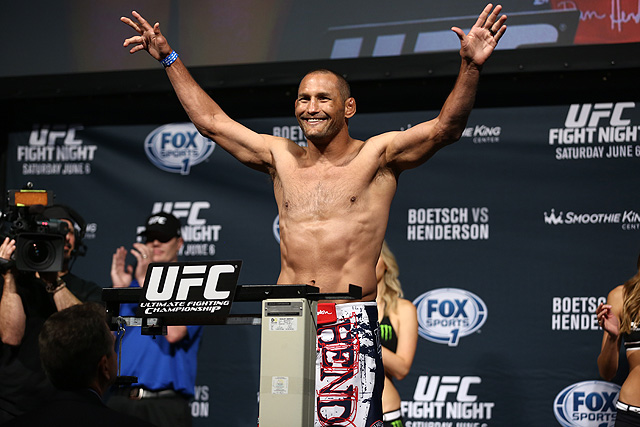 It may be common sense and futile to say, but it’s time for Dan Henderson -- the greatest American mixed martial artist of all time -- to hang up his four-ounce sleeping pills and call it a career.

What a great career it has been. My radio partner Jordan Breen and I have spoken often about the big game hunters of our sport, and Henderson has always ranked near the top of that list. I’m not talking about the game mounted on the walls of his trophy room. I’m talking about the fighters -- the best of the best, regardless of weight class -- whom he actively sought out during his career. You know, Fedor Emelianenko, Wanderlei Silva, Anderson Silva, Daniel Cormier, Lyoto Machida, the Nogueira brothers, Vitor Belfort, Rashad Evans and Rich Franklin.

That is a “Who’s Who” of Pride and UFC champions from middleweight up to heavyweight. It is hard argue that anyone has faced better competition than has Henderson in his 18-plus-year campaign, and while he never had the privilege of wearing a UFC title belt around his waist, he does have the honor of being the only fighter in the history of MMA to simultaneously hold belts in two weight classes of a premier organization. He was the 183- and 205-pound champion of Pride FC before they were sold to the UFC and dissolved.

The most amazing thing about Henderson was the apparently indestructible nature of the former two-time Olympian. That wasn’t the read I got when I first saw him fight at UFC 17 or throughout his run to the Rings tournament championship in 2000. He was “Decision Dan” back then, and fans did not seem to like him or his fighting style very much.

That all changed on Dec. 23, 2000, when he squared off with Wanderlei Silva in one of the most brutal, back-and-forth fights I have witnessed in my 17 years of covering MMA. The pictures of both fighters backstage after the fight are legendary for the carnage they portray. If you have UFC Fight Pass, I would suggest watching that fight if you want to see just how tough is Henderson.

Henderson’s granite chin and iron fists that made him one of the fighters whose bouts you couldn’t miss. The problem is, at 45 years of age, “Hendo” just doesn’t have the chin that let him fight with the fan-friendly style he employed throughout his glory days. The speed is not there, and that has been apparent to just about everyone who has watched him drop six of his last eight contests.

I’m sure it is frustrating for Henderson to know that the WMDs at the end of his arms are still capable of ending anyone’s night, but the fact that he hasn’t been able to detonate anyone other than a worn Mauricio “Shogun” Rua and a slow plodder in Tim Boetsch over the past four years is telling. Also, the last four losses were one-sided with three of them ending in stoppages and the other being an epic beating at the hands of Cormier that was closed out with a merciful rear-naked choke.

So, with one fight left on his UFC deal, what is next for Henderson?

In my estimation, there are a few possible scenarios. First, he could re-sign with Zuffa and keep fighting big fights against tough competition. That would likely depend on how UFC boss Dana White and CEO Lorenzo Fertitta feel about promoting a fighter who is clearly on the decline. We’ve seen them shy away from this in the past, namely with Chuck Liddell, who they pushed toward retirement after a string of ugly knockout losses. The likelihood of this playing out seems pretty slim.

Second, Henderson could ride off into the sunset, either now or after his final contracted fight for the UFC. If he came to an agreement with Zuffa brass, they might be inclined to give him a royal send-off with a UFC Hall of Fame induction and all the other bells and whistles. This scenario also seems a bit far-fetched considering Hendo has stated his desire to keep competing as long as he can.

The third and most probable outcome has him fighting out his contract and making the much-anticipated move to Bellator, where he would be reunited with his former Strikeforce promoter, Scott Coker. If this is the plan, Henderson can expect another tough opponent -- not that he’d be opposed to that -- because the UFC isn’t going to pave the road to the competition with a cupcake.

If Henderson is insistent on continuing to fight, the Bellator route is probably the best one. I’m sure he will be handsomely compensated -- most likely even more so than he has been by the UFC -- and he will not have to face the kind of competition he was seeing fight after fight inside the Octagon.

Honestly, I’d like to see Henderson choose door number two. It’s not that he would tarnish his considerable reputation by continuing to fight -- we all remember the Michael Jordan from the Bulls, not the guy from the Wizards -- but I just don’t think he has anything left to prove. He is a surefire top 5 all time fighter, should be a UFC Hall of Famer and is beloved by fans. The only thing left for him to accomplish -- winning a UFC belt -- just is not going to happen.

With all that said, look for Henderson to be holding up Bellator tent poles starting sometime in summer 2016.

Greg Savage is the executive editor of Sherdog.com and can be reached by email or via Twitter @TheSavageTruth.