On Saturday, Jessica Andrade knocked out Rose Namajunas with a thunderous slam to become the fourth woman to capture the Ultimate Fighting Championship strawweight title. In so doing, she placed herself atop the game of rock, paper, scissors that has defined the 115-pound title picture -- and confounded practitioners of “MMA math” -- since the division was introduced in late 2017.

Follow along: The woman Andrade defeated to win the belt, Namajunas, had won the title with a stunning knockout of Joanna Jedrzejczyk, then took a convincing decision in their rematch, making her 2-0 against the greatest fighter in the short history of the division. Jedrzejczyk’s last successful title defense before losing to Namajunas had been a one-sided drubbing of Andrade. And the woman “Joanna Champion” defeated to kick off her thus far unmatched run of five straight title defenses? That would be Carla Esparza, who became the UFC’s inaugural strawweight champ by defeating none other than Namajunas, convincingly at that.

It isn’t quite as convoluted as that knotty narrative would seem to imply. Namajunas’ game has developed enormously, to the point that most observers would probably favor her in a rematch with Esparza. The same can be said for Andrade, who now faces the very real possibility of defending her title against Jedrzejczyk in the next year. For now, however, “Bate Estaca” can revel in her new role as a UFC champion, knowing that no shortage of interesting contenders await.

Below is the brief but eventful history of the UFC strawweight title. It tells a story of a division with surprising depth and parity from day one, a division that continues to grow and develop as its initial crop of contenders have taken turns knocking each other off the throne. 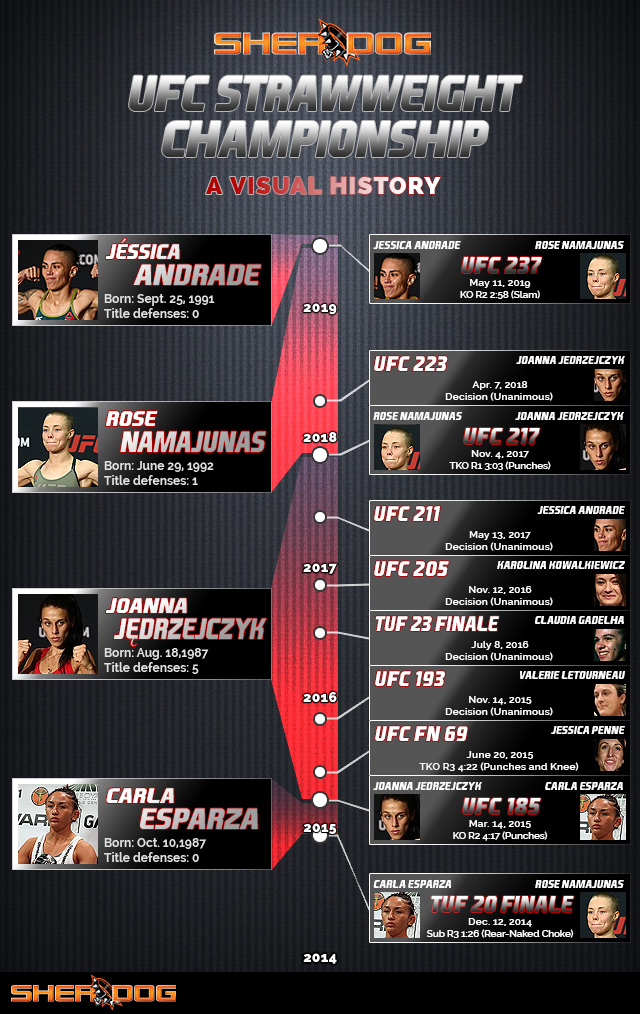 « Previous Path to Glory: How We Arrived at Bellator Heavyweight Tournament Final Next The UFC Middleweight Title: A Visual History »