On Dec. 29, Cris Cyborg will attempt to defend her Ultimate Fighting Championship featherweight belt for the third time, further establishing her dominance over a division that was, for all intents and purposes, made expressly for her.

Of course, this being the UFC, the birth of the new division was not without complications. The inaugural champ, Germaine de Randamie, promptly decamped, citing both her day-job duties as a police officer in her native Netherlands and her belief that “Cyborg” was a performance-enhancing drug cheat as reasons for her refusal to defend. Fans bristled and the UFC stripped de Randamie of the belt, but the damage was done; women’s featherweight was off to a shaky start.

Justino quickly righted the ship, winning the vacant title with a destruction of former Invicta FC bantamweight champ Tonya Evinger and defending it on a regular basis ever since. Nonetheless, Cyborg’s UFC run -- four of her five opponents have been former bantamweights and three of five were plucked from Invicta expressly to face her -- has done little to dispel the popular perception that she is champion of a “Victim of the Month Club” rather than a true division. Unfortunately, Cyborg’s best chance to pick on someone her own size in the foreseeable future, Megan Anderson, lost decisively earlier this year to two-time unsuccessful title challenger Holly Holm, indicating that she is likely not ready yet for her own title shot.

UFC 232 offers a chance for “Cyborg” to change the story a bit. While her challenger is once again a bantamweight, 135-pound champ Amanda Nunes is both extremely skilled and a big-framed woman who has had difficulty making the bantamweight limit. The unique challenge presented by Nunes is evident in the fact that for the first time in a decade, Justino will enter the cage as only a moderate favorite, around 2:1, rather than a 10:1 or 20:1 laugher. Each woman in the UFC 232 co-headliner represents the greatest challenge the other has ever faced, and “Cyborg”-Nunes may well be the highest-level women’s fight ever.

This, then, is the short history of the UFC women’s featherweight title and the times it was won, lost or defended. It tells a story of an all-time great fighter who has spent most of a storied career waiting for a proper challenge, and who may finally have found it. 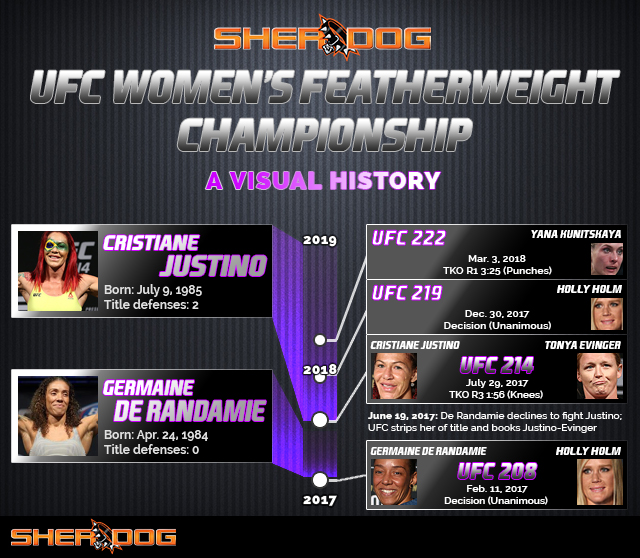