With a stunning, emphatic first-round knockout of Cris Cyborg at UFC 232, bantamweight champion Amanda Nunes made history as the first woman—and only the third fighter, period—to hold two UFC titles simultaneously. Nunes’ victory over “Cyborg” immediately spurred speculation over whether she is the greatest female fighter.

While that is up for debate, Nunes’ record is ridiculous. Not only does she own stoppage wins over two UFC bantamweight champions in Miesha Tate and Ronda Rousey, she also beat both of the previous featherweight champs, Justino and Germaine de Randamie. On top of that, she’s 2-0 against the current flyweight champ, Valentina Shevchenko, and for good measure, she has a knockout win over Bellator MMA featherweight champion Julia Budd, long thought the second-best 145-pound woman in the world after “Cyborg.”

The question now is what Nunes will do. In the immediate aftermath of her career-defining victory, she declined to say whether she plans to defend both titles. Only time will tell if Nunes will bring stability to featherweight, and the division’s future may depend on whether she is inclined to defend the belt.

Of course, stability has been in short supply since the beginning. The inaugural champ, de Randamie, promptly decamped, citing her duties as a police officer in her native Netherlands as well as her belief that “Cyborg” was a performance-enhancing drug cheat as reasons for her refusal to defend. Fans bristled, and the UFC stripped de Randamie of the belt, but the damage was already done as women’s featherweight was off to a shaky start.

Justino brought in a semblance of order, winning the vacant championship with a destruction of former Invicta FC bantamweight champ Tonya Evinger and defending it twice. However, Cyborg’s UFC run—five of her first six opponents were former bantamweights and three of those were plucked from Invicta expressly to face her—did little to dispel the popular perception that she was champion of a “Victim of the Month Club” rather than a true division. For the moment, however, that’s someone else’s problem. The UFC women’s featherweight title, question marks and all, now belongs to Nunes.

This is the history of the UFC women’s featherweight title and the times it was won, lost or defended. It tells a story of two all-time great fighters: one who spent most of a storied career waiting for a proper challenge, and another who provided just that. 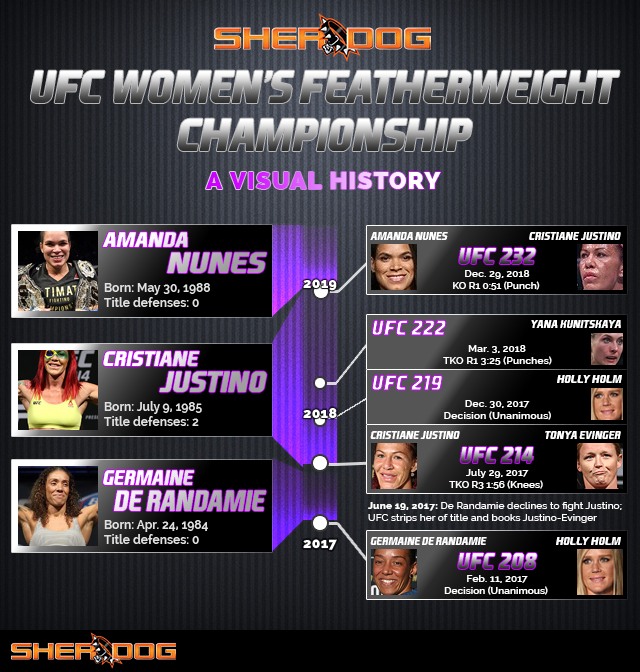