This weekend, the greatest woman ever to pull on a pair of four-ounce gloves will attempt to put just a little more distance between herself and the historical pack.

In the co-main event of UFC 259 this Saturday, two-division queen Amanda Nunes is set to defend her Ultimate Fighting Championship featherweight title against Megan Anderson. If the “Lioness” is successful in that endeavor, she will tie her immediate predecessor, Cristiane Justino, for the most title defenses (2) in the relatively brief history of the division.

While that is the expected outcome — she will enter the Octagon as one of the biggest favorites in UFC history — Nunes’ place as the most accomplished female fighter of all time will be secure for now, even if Anderson were to pull off the upset. Nunes’ résumé is ridiculous, boasting stoppage victories over every single woman who has ever held a UFC or Bellator MMA title in either of the divisions in which she competes: "Cris Cyborg," Germaine de Randamie, Ronda Rousey, Holly Holm, Miesha Tate and Julia Budd. On top of that, she owns two decision wins over Valentina Shevchenko, who subsequently moved down to flyweight and went on to become the most dominant fighter that division has ever seen. In an era in which more and more fighters are winning titles in multiple weight classes but few manage to defend even one of them, Nunes is close to completely cleaning out two divisions of credible challengers.

Ahead of UFC 259, the 32-year-old Brazilian waved away talk of retirement, but acknowledged that the birth of her first child portended a new phase in her life. For however much longer we are privileged to watch her work, let us appreciate the utter dominance of one of the greatest fighters ever. 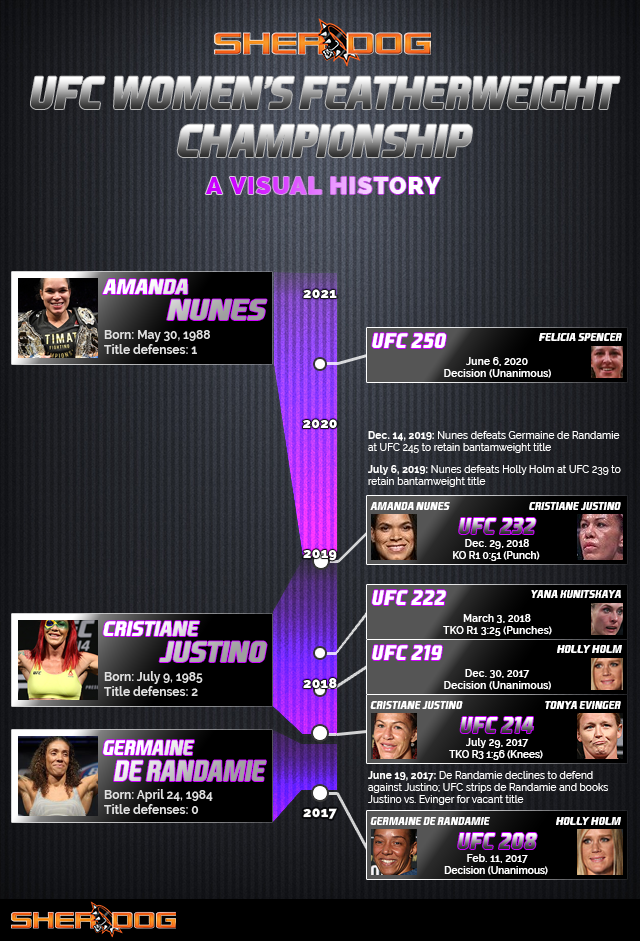