When Valentina Shevchenko steps into the cage to face Katlyn Chookagian at UFC 247 this Saturday, it will be her third title defense, and she will have been a 10-to-1 favorite in all of them. Barring an all-timer of an upset by Chookagian, it’s likely that Sunday morning will find us asking “what’s next” for the beleaguered flyweight division.

While Shevchenko’s iron-fisted rule has solved one problem—the complete chaos that accompanied the inception of the Ultimate Fighting Championship’s newest division—it has done nothing for the other, more concerning issue: a lack of depth and ready contenders. In fact, her dominance over a string of game but overmatched women, and the Cris Cyborg-esque way in which the UFC has had to scramble to find credible challengers for her, has only highlighted the problem.

Of course, women’s flyweight tripped over its own feet right out of the gate. In 2017, the UFC devoted a season of “The Ultimate Fighter” to crowning an inaugural champion, with an impressive cast of veterans to lend the new division credibility. However, the little-heralded and No. 14-seeded Nicco Montano ended up fighting her way to the final, only to have her opponent, Sijara Eubanks, fall victim to a poor weight cut. In stepped Roxanne Modafferi, who had been the No. 1 seed going in but had lost to Eubanks in their semifinal.

Needless to say, Montano’s win over Modafferi did little to legitimize her new belt in the eyes of many fans, and to make matters worse, she promptly took most of a year off due to injury. Upon her recovery, Montano was booked to defend her title against Shevchenko, a previous bantamweight title challenger who was seen by most observers as the champ-in-waiting whenever the flyweight division was created. When Montano was forced to pull out of that fight the day before UFC 228 thanks to a failed weight cut, the promotion decided to reboot, stripping Montano of the title and booking Shevchenko against Joanna Jedrzejczyk to fight for the vacant title.

Shevchenko defeated Jedrzejczyk decisively to claim the title, and has defended it twice in dominant fashion since then. Should she get through Chookagian as fans and oddsmakers seem to expect, it’s anyone’s guess what the UFC will come up with for her next. 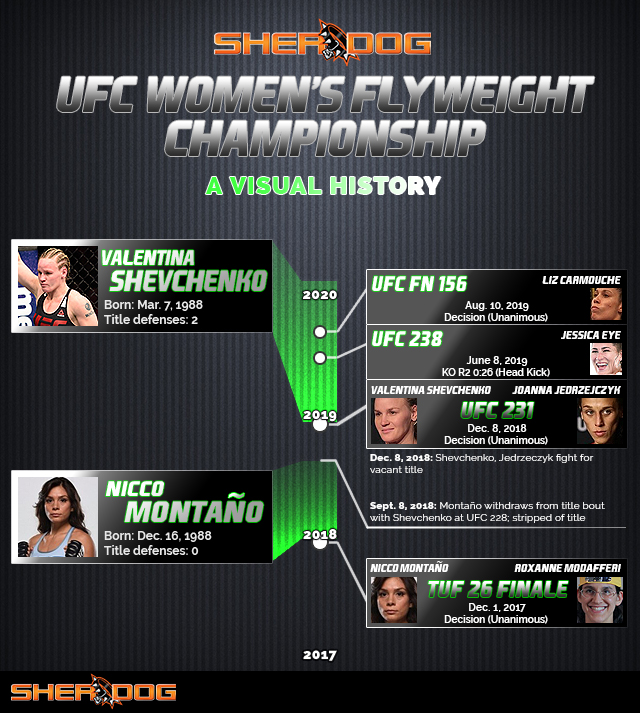