Well, we ended up pretty much where we expected we would, though not in the way most would have guessed.

From the moment Ultimate Fighting Championship announced it would be introducing a women’s flyweight division, most observers saw Valentina Shevchenko as the queen-in-waiting, never mind that Season 26 of “The Ultimate Fighter” had been tapped to determine its inaugural champion. After all, Shevchenko had been a credible title contender at bantamweight in spite of being slightly undersized. It was an obvious, natural fit. However, the division tripped over its own feet right out of the starting blocks. “TUF 26” brought in an impressive cast of veterans to lend the new division credibility, but it was the little-heralded and No. 14-seeded Nicco Montano who ended up fighting her way to the final, only to have her opponent, Sijara Eubanks, fall victim to a blown weight cut. In stepped Roxanne Modafferi, who had been the No. 1 seed going in but had lost to Eubanks in their semifinal.

Needless to say, Montano’s win over Modafferi did little to legitimize her new belt in the eyes of many fans, and to make matters worse, she promptly took most of a year off due to injury. When Montano was forced to withdraw from her scheduled title defense against Shevchenko at UFC 228 in September due to her own failed weight cut, the UFC promptly stripped her of the belt. Even then, it took two tries to get Shevchenko booked against a suitable challenger, but with her one-sided victory over longtime strawweight champ Joanna Jedrzeczyk at UFC 231, the Shevchenko era appears finally to have begun.

Here is the brief, turbulent history of the UFC women’s flyweight division. It tells a story of plans gone awry, of the folly of attempting to force a narrative in a sport as essentially wild and unscripted as mixed martial arts, and of the futility of trying to solve weight cutting by creating more weight classes. The best that can be said of this division is that better days are almost certainly ahead, as a batch of intriguing contenders line up for their shot at “Bullet.” 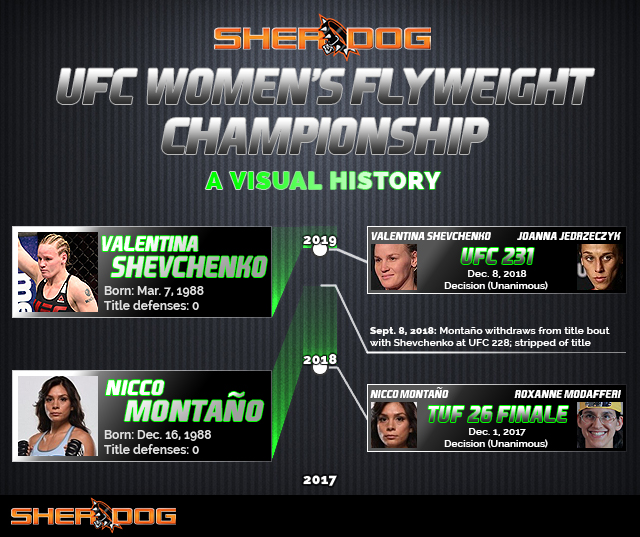