And just like that, chaos resolves into order. With a scintillating head-kick knockout of Jessica Eye at UFC 238, Valentina Shevchenko has taken what was once the biggest mess of any UFC division and made it feel very, very stable.

Women’s flyweight tripped over its own feet right out of the gate. The UFC devoted a season of “The Ultimate Fighter” to crowning an inaugural champion, with an impressive cast of veterans to lend the new division credibility. However, the little-heralded and No. 14-seeded Nicco Montano ended up fighting her way to the final, only to have her opponent, Sijara Eubanks, fall victim to a poor weight cut. In stepped Roxanne Modafferi, who had been the No. 1 seed going in but had lost to Eubanks in their semifinal.

Needless to say, Montano’s win over Modafferi did little to legitimize her new belt in the eyes of many fans, and to make matters worse, she promptly took most of a year off due to injury. Upon her recovery, Montano was booked to defend her title against Shevchenko, a previous bantamweight title challenger who was seen by most observers as the champ-in-waiting whenever the flyweight division was created. When Montano was forced to pull out of that fight the day before UFC 228 thanks to a failed weight cut, the promotion decided to reboot, stripping her of the title and booking Shevchenko against longtime strawweight queen Joanna Jedrzejczyk to fight for the vacant title a few months later.

Shevchenko defeated Jedrzejczyk decisively in December to claim the title, and now that she has passed the “Matt Hughes test” with a successful defense of that belt, it doesn’t look as if she’s going anywhere soon. In other words, things have ended up pretty much where we expected, even if the journey was a strange one. 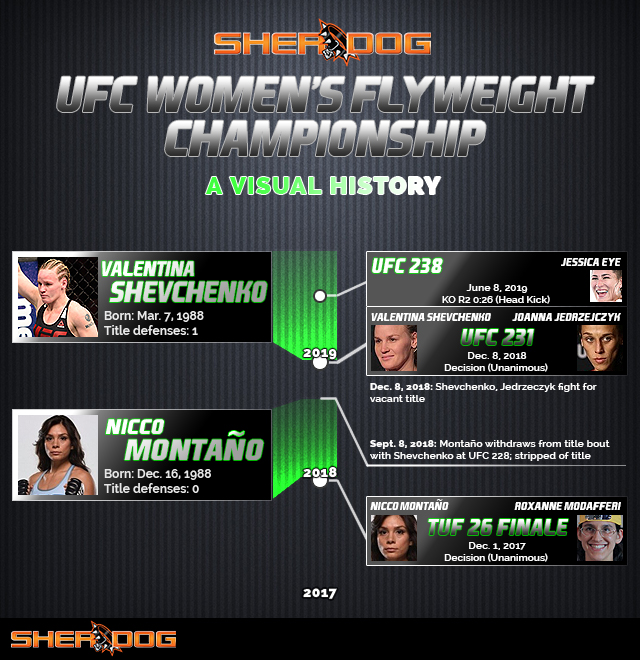