On Saturday, Valentina Shevchenko will look to continue her stranglehold on the flyweight division, and bolster her case as the top pound-for-pound woman in the sport.

As “Bullet” prepares to square off against Lauren Murphy in the co-main event of UFC 266, she is perhaps the most dominant divisional champion of either gender in major MMA. A win would be Shevchenko’s sixth consecutive title defense, breaking a three-way tie with two of her former opponents, Amanda Nunes and Joanna Jedrzejczyk, for the UFC women’s divisional record. (Though to be fair, Nunes has defended the bantamweight title five times, but has also defended the featherweight strap twice over that same time.)

A week out from UFC 266, Shevchenko is at least a 12-to-1 favorite on every major sportsbook, as she has been against all of her challengers aside from Jessica Andrade, who came in at “only” +400 for their title fight this April. Murphy may end up being the biggest underdog of the bunch by fight time, and for the most part it isn’t even about her. “Lucky” is on a five-fight win streak over solid opposition and at 37 appears to be in the best form of her career; the problem is that Shevchenko’s reign has been so dominant, so suffocating, that she has made some legitimately great fighters look overwhelmed, and some proud contenders relieved just to make it to the final horn.

Here is the history of the UFC women’s flyweight title and the times it was won, lost or defended. It tells the story of a division that started in chaos but has become a conveyor belt, feeding challengers to a champion who has been knocking them off with brutal efficiency, almost faster than the promotion can find them. 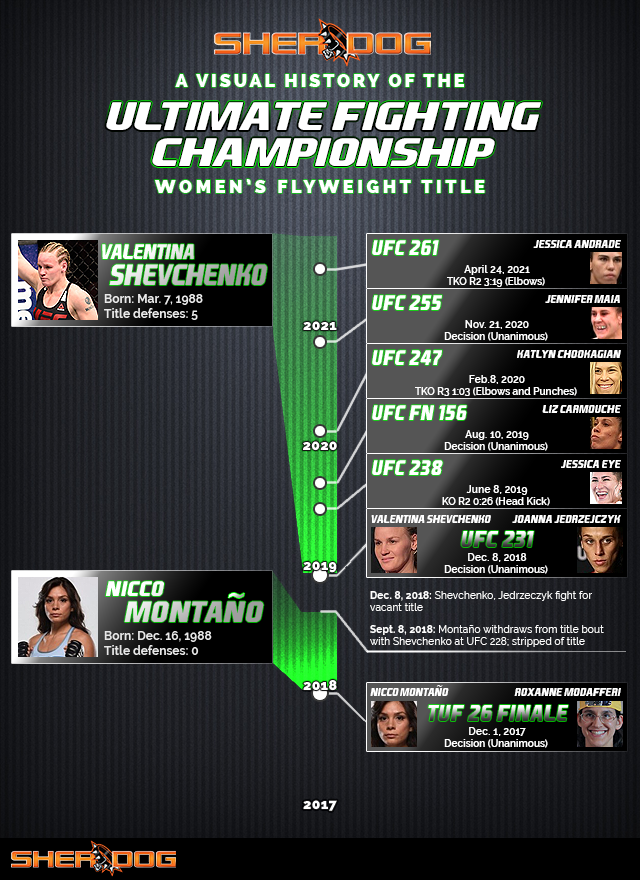